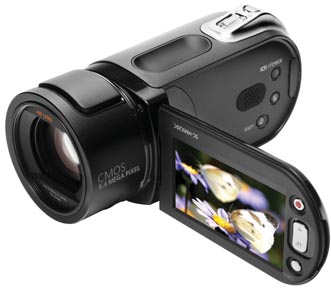 Samsung’s VP-MX20 camcorder is purpose-designed for quick and carefree shooting and sharing, creating video that’s ideal for viewing on the Net or the small screens of portable media devices such as phones and MP3 players. Uploading video to websites such as YouTube, blogs and social networking sites is a doddle, with Web and Mobile modes that automatically adjust the video resolution to 640 x 480 pixels. And with no need to transcode files, video can be imported directly to compatible MP3 players too.

The battery is good for three hours shooting, according to Samsung, with 8GB, 16GB and 32 GB memory cards capable of storing up to four, eight and 16 hours of video respectively. A 2.7 inch screen for editing on the fly, swivel hand-grip for capturing hard-to-reach low angle shots, and Face Detection technology for automatically detecting and adjusting exposure for up to 12 faces within a frame, add to camcorder’s appeal.