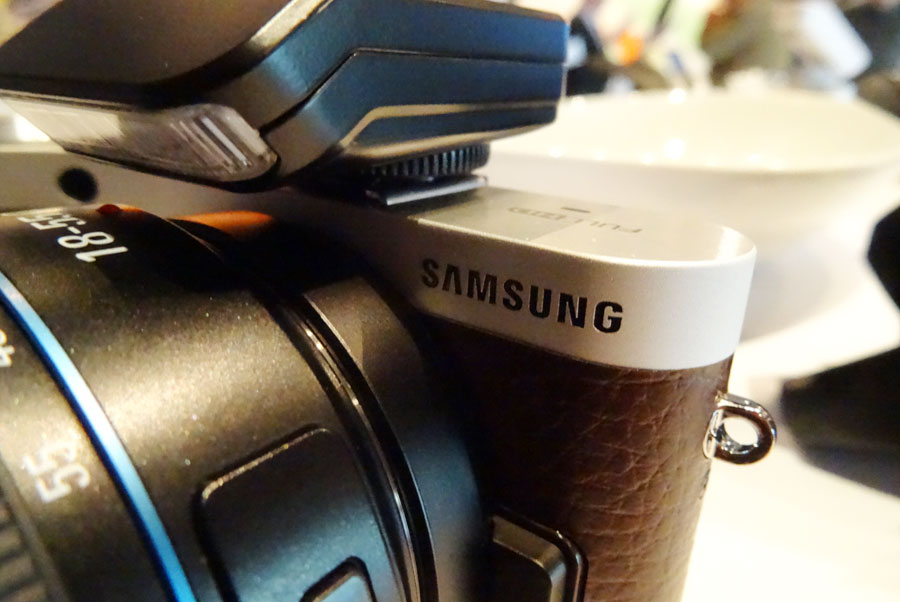 The compact interchangeable lens camera market is heating up, and Samsung is providing another reason to try its system out, introducing a camera to Australians that features retrolicious looks with modernised innards.

Coming to Australia within the next few weeks, Samsung’s NX300 is the next camera to feature an DSLR-sized sensor in a body that’s not-so-DSLR sized.

While it won’t compete with the technology found inside massive cameras like the Nikon D4, this camera is poised to take on smaller lens-based cameras with similarly-sized sensors and below, such as Sony’s NEX range, DSLRs from Nikon and Canon, and the Micro Four-Thirds cameras from Panasonic and Olympus.

First shown at the Consumer Electronics Show in Las Vegas, the NX300 will bring with it an all new 20.3 megapixel sensor that incorporates some neat technology, such as hybrid auto focus that uses 105 points of phase detection and 247 points of contrast across the sensor, low-light sensitivity up to ISO 25600, and image processing designed to improve speed while adding support for built-in 3D processing when used with specific lenses.

One of those we’ve seen before (coincidentally, at CES), but will be launching alongside the camera, with the 45mm f/1.8 prime supporting both 2D and 3D images at the flick of a switch, with an internal element that makes it possible to shoot 3D inside the lens at a lower aperture than normally seen in 3D lenses.

“This is Samsung’s statement that we’re very serious about this segment,” said Arno Lenior, Marketing Director for Samsung Australia. “We have an amazing amount of technology packed into this product.”

Some of that tech will include high speed shooting capability with 8.6 frames per second shooting in RAW, with up to 10fps possible if you push the image size down, and a maximum shutter speed of 1/6000 of a second, just ever slightly lower than the 1/8000 offered by the likes of the Nikon D4, D800, and the upcoming Olympus E-P5.

The rear screen sits at a big 3.31 inches and offers a similar AMOLED display to what’s seen in Samsung’s smartphones, with touch support working alongside a physical button interface to the right. Dial controls are also here, making it easy to use manual controls, as well as select the various modes of the camera.

Also included is the next generation of Samsung’s Smart Camera system, now in version 2.0, making it possible to share photos directly from the camera without a computer nearby.

To make this happen, you’ll probably want a mobile phone, and the Smart Camera App, you’ll be able to connect over WiFi to send images online. Near-Field Communication support is also there, so if you have an NFC-capable smartphone with Android 4.0 and above, you’ll be able to hold it next to the Samsung NX300 and pair the two devices up for easy sharing.

One interesting feature isn’t what is inside the camera, but what is being thrown in the box with the camera, and that’s a copy of Adobe’s Lightroom 4, one of the more popular photo cataloguing and editing applications out there.

“It’s not just about the functionality or the speed benefits, but it’s also about the usability afterwards,” said Craig Gillespie, Head of Digital Imaging at Samsung Australia. “At this level, the camera is capable of taking pictures in the RAW format, [and] that’s where this software is going to be a key differentiator.”

Samsung’s NX300 will hit stores in mid-May, advertised alongside materials featuring Samsung camera ambassador Usain Bolt, and will come with a recommended retail price of $899, arriving with an 18-55mm f/3.5-5.6 lens and Lightroom 4. Two colours will be available in Australia, with the retro brown leatherette look and a white with silver design.

Samsung’s new NX300 will join two other models already sitting in the line-up, with the then-flagship NX20 still taking the top-spot at $999 and the less expensive NX1000 sitting pretty at $649.

A replacement is coming for the 1000, however, set to be replaced by the end of the year with the NX2000, which will feature the same sensor inside a different body with a slightly bigger LCD screen (3.7 inches). The 3D capable 45mm f/1.8 lens will run for $499.

A brief play with the NX300 yesterday reveals a reasonably solid body with some nice ergonomics, as well as a responsive touchscreen and decent camera controls. Initial impressions showed some speedy shots were possible here, and while we liked some of the features, we felt a little underwhelmed by the rich-tone HDR images.

Previously introduced features such as Samsung’s i-mode to let you control aperture and shutter speed settings from the lens have been carried over from previous generations, and the interface feels like it’s been refined and inspired by what we’re seeing in Samsung’s other smart devices, making it easy to become accustomed to use if you’ve played with a Samsung Galaxy device before.

You can see some of our pictures shot from the camera in our below, most featuring an Usain Bolt standee that we carried around the Opera House (because we could, and were asked to), but with the exception of the HDR mode, this looks like a nice camera that we’re very much looking forward to playing with.