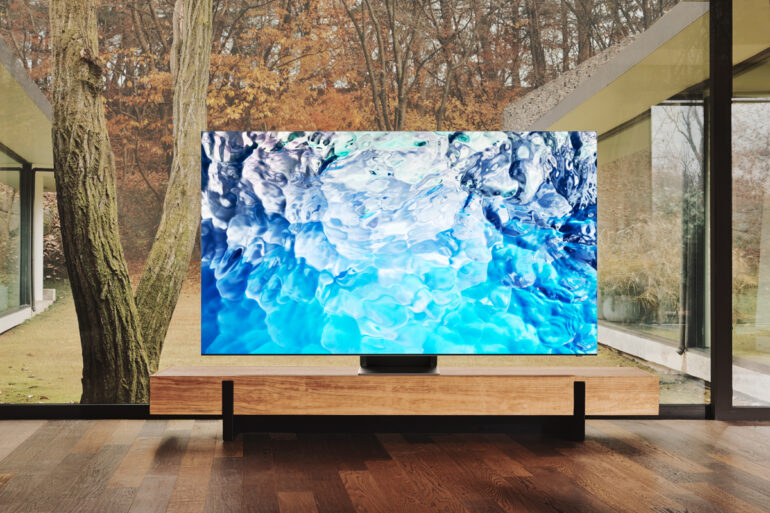 Samsung has taken the wraps off its 2022 Neo QLED TV range for the Australian market. While we did see some of the details earlier this year at the Consumer Electronics Show (CES), there were still a few surprises. So, let’s break down what we can expect from Samsung’s top of the range models that are in stores, starting today.

First off, all Samsung Neo QLED TVs use advanced mini-LED panels, which provide improved control over where light is positioned compared to normal LCD televisions.

Now, there’s Shape Adaptive Light technology, which improves this control even further. The technology analyses lines, shapes and surfaces in an image to figure out where their borders are. This means that light and colour can be placed within the shapes more accurately, with less light spilling into areas that should be dark, or black. This effect is called ‘blooming’, and not something you want on a high-end screen. It’s also something that OLED TVs from LG and Sony do very well.

In terms of light, or luminance, 2022 models also get 4 times more greyscale levels than 2021 models, thanks to 14-Bit HDR processing. This helps improve the realism of images, with finer graduations between light levels.

Next, there’s Real Depth Enhancer, which, again, uses AI to identify objects in a scene, and then enhances them so they stand out from background objects, creating a sense of depth.

Using a built-in light sensor, 2022 Neo QLEDs can reduce the amount of blue-light used in an image depending on the time of day.

As blue light can cause eye strain and even lead to sleep loss, the system will gradually reduce the screen’s brightness and blue light as the day gets later.

You can now calibrate your 2022 Neo QLED TV using an app and camera on your Android or iOS smartphone. There are two types of calibration, one is a Basic mode, which takes about 30 seconds, while the other is a ‘Professional’ calibration that is more rigorous and takes about 10 minutes. You can run the calibration from Samsung’s Smarthings app, or otherwise, launch it from the Smart Hub’s menu.

Once calibrated, your settings can be stored as a custom picture mode, and can be applied to what you’re watching.

Last year’s Neo QLED models introduced Object Tracking Sound. This is where a grid of speakers positioned behind the panel would make sound appear like it was coming from a certain part of the screen. However, a downside is that they were only able to emulate multi-channel sound, such as Dolby Atomos.

2022 models get native Dolby Atmos support and are also the industry’s first TVs to feature upwards and side-firing speakers built into the back of the panel.

Samsung’s Smart Hub interface has been overhauled to bring your subscription TV content to the fore. This essentially consolidates all your shows from Paramount+, Netflix and Disney+ Stan, Kayo, Binge and catch up TV onto one scrollable screen.

The system will also make suggestions based on what you’ve been watching to help you discover new shows without searching.

Samsung’s own TV Plus channel is included for free, which contains sports, news and entertainment sub-channels.

There’s even new NFT platform where you can view, discover and purchase digital artwork through a collaboration with Nifty Gateway, which is a NFT marketplace.

The 2022 TV and accessories range is available from Wednesday 16th March at retailers and online at samsung.com/au/