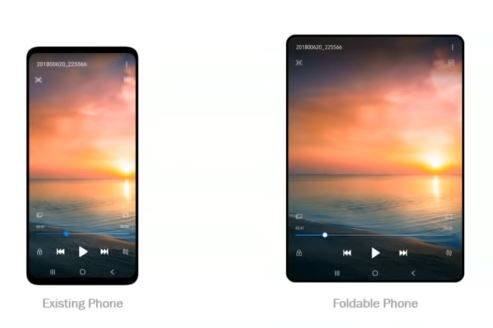 The video below is a presentation on the Samsung Foldable phone to the Samsung Developer’s conference last week. It is 35 minutes long so let us give you an overview.

There are two main issues with all foldable screen smartphones.

First, is the complete lack of standards for foldable screen apps. How do they address the different screens? That was why Samsung was addressing its Developer Conference. It may run Android Pie (Google has already incorporated some of the smarts), but itis going to need a completely new User Interface (One UI) to make foldable screens more than a cute, expensive gimmick.

The next issue is how to power the screen (CPU and GPU) and get enough battery life. Samsung’s 8nmExynos 9820 SoC addresses that. It requires three GPUs make foldables work.

On the camera side, it supports 8K@30fps video and five separate camera sensors

Of course, this chip will power the Samsung Galaxy S10 and Note 10 as well. It should be spectacular.

The aim is to get this tech into a device around 200g. Samsung also made it clear that it would not be rushing this out to beat the competition. When its ready, it is ready.

“The foldable display lays the foundation for a new kind of mobile experience. We are excited to work with developers on this new platform to create new value for our customers.”