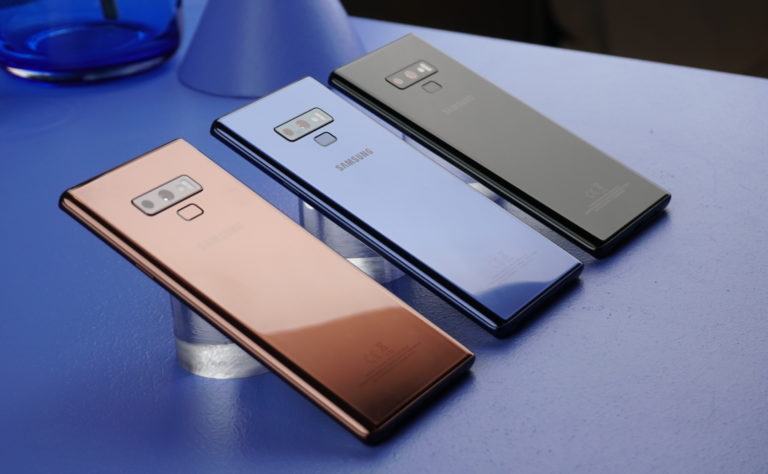 Samsung has taken the wraps off its latest Galaxy Note9 at the Unpacked 2018 event in New York. Introduced back in 2011, the original Note made a splash as the first ‘phablet’ phone. Its huge 6+ inch screen and novel S-Pen stylus were all about content creation and productivity. With the Note9, it’s an even more capable workhorse, and now there’s a focus on the fun too.

Starting with its appearance, you might not notice that it’s slightly thicker and wider than its predecessor. New measurements are 161.9mm long by 76.4mm wide and 8.8mm thick. Regarding weight, it’s 201 grams.

Screen size is 6.4 inches, and the gorgeous AMOLED screen has a 2,960 x 1,440 resolution. It also delivers pin-sharp clarity with 516 pixels-per-inch. New design highlights include a diamond cut metal frame that mixes matte and glossy surfaces. This creates a premium feel and the illusion that it’s thinner than it is.

Australia gets some new colours. There’s Midnight Black, as found on the Galaxy S9, an attractive Metallic Bronze and handsome Ocean Blue. The Ocean Blue model comes with a contrasting yellow S-Pen. The stylus is colour-matched to the bronze and black versions. You might not notice that the lens housing is now the same as the case’s colour. The fingerprint sensor has moved to beneath the rear dual camera lenses, making easier to find. All things aside, the new Note is quite similar in appearance to the Note8. Not that this is a bad thing.

One of the key standouts for the Note9 is the battery. It’s grown 21 per cent over the Note8 and has an enormous 4000mAh capacity. This is some serious juice, and it should last at least a day under intensive workloads. Much longer when being used for less battery hungry tasks like web browsing and checking emails. We didn’t get a chance to test it overnight. We’ll give it a thorough run in our full review, coming soon. Rest assured, the larger battery gets the same 8-point quality checks introduced after the Note7 battery fire issue.

Working hand-in-hand with the larger battery is a new ‘AI’ driven power and heat management feature. This determines when the phone has reached its target temperature threshold. If so it adjusts different components to find the least intrusive way of turning down the heat.

Space is no longer a premium

For content creators, movie hoarder and photo nuts, the Note9 gives you the space to store your content libraries. Now, the entry level version comes with 128GB of storage, and the top-end model comes with a massive 512GB. It also supports 512GB MicroSD memory cards. So all up, the Note9 can hold up to 1 terabyte of stuff!

Samsung reports that the S-Pen is the number one purchase driver for the Galaxy Note. With this in mind, it makes sense that Samsung has revamped the S-Pen with the Note9. While it looks the same as before, the stylus is now a ‘smart’ Bluetooth 5.0 device. This means that you can use the S-Pen for a lot of different things, up to 10 meters away from the phone. For example, the pen can become a ‘remote’ for the shutter button when taking selfies, or group photos. Also, the pen can advance a presentation slide that you’re sharing from your phone on a TV, but more on this later. You could use it to play, pause and advance your Youtube videos, all with a click, and double-click.

The S-Pen now has a battery inside and can be charged up by inserting it into the Note9. It takes just 40 seconds to fully charge and lasts for 30 minutes, thanks to a super-capacitor.

Of course, you can write with the pen when the battery is flat, but you can’t use it as a remote. Another nice touch is that the physical colour of S-Pen matches the ink colour when making off-screen notes. Samsung also showed off a fresh new drawing app that lets you trace images for a hand-drawn effect.

Samsung is opening the S-Pen SDK up to developers, which means that many more apps will be able to take advantage of it. Who knows what interesting uses they’ll come up with.

The Note9 gets the same camera setup as the Samsung Galaxy S9 launched earlier this year. You can read more about it here, and it has the same excellent low-light performance and dual 12 megapixels wide F1.5 and telephoto F2.4 lenses. Both have Optical Image Stabilisation and are capable of 2 x optical and 10 x digital zoom. So, expect excellent photo capabilities.

What is different than the S9 is the ‘intelligent’ camera features. First, there’s a Scene Optimiser mode. This analyses your  ‘scene’ and applies the appropriate adjustments to get the best shot. For example, we pointed the camera at a flower, and it adjusted to a macro mode. We shot a grassy outdoor scene, and it brightened up the greens. We also tested it on a bagel, and it identified our scene as ‘food’ and adjusted the settings. There are 20 individual scenes that it can recognise.

The new Flaw Detection mode is an excellent way of avoiding common photo mistakes. It can detect smudged lanes, shooting into the sun, image blurring and when someone blinks. When this happens, for example, after you take the photo a message pops up on the screen saying that someone was blinking and you may want to take another shot.

It’s all about the games

Given its impressive processing power and large screen, it’s no surprise that the Note9 would make a great gaming phone. And with the massive interest in games like Epic Game’s Fortnite and Player Unknown Battle Grounds, Samsung has genuinely embraced the fun side of the Note9.

Samsung has arranged an exclusive deal with Fortnight Beta on Android, so the ONLY place you can play it is on Samsung Galaxy devices, starting with the S7 and including the Note9. There’s also a special Samsung ‘Galaxy’ skin. For those who love to play the Fortnite, and about 45 million do, this is a big reason to pick up this phone.

Also, gaming is one of the most challenging things to do on a phone because of the graphics demands and excess heat it creates. To remedy this, the Note9 comes equipped with a ‘Water Carbon Cooling System’. This consists of a carbon fibre heat spreader and a water-filled heat pipe to move heat quickly out of the device. It sounds good in theory and will be interesting to trial, as it can be frustrating when an hour of gaming heats up your phone and kills your battery.

As mentioned above, there’s the on-device AI based performance adjuster, so when a target temperature is reached, the system reduces different components to cool things off, while still delivering a decent gaming experience.

PC in a phone

Previous Note models could transform into a desktop computer with the help of the Samsung DeX docking station. Now, you can plug the Note9 directly into a computer monitor or TV to run apps in a full desktop view. While you don’t get the cooling fan found in the DeX docking station, the Note9 doesn’t need it. There are a couple of special adaptors that you can use including one with extra USB ports for a keyboard and mouse and an ethernet socket. Otherwise, you can connect both via Bluetooth instead.

When and how much?

We’ll be putting the Samsung Galaxy Note9 through its paces over the coming weeks. Keep an eye out for our full review. Otherwise, Samsung’s new ‘ultra-premium’ model looks and feels great. It has some compelling features, including Fortnite, to draw a crowd.

Valens Quinn attended the Unpacked 2018 event in New York as a guest of Samsung Australia.