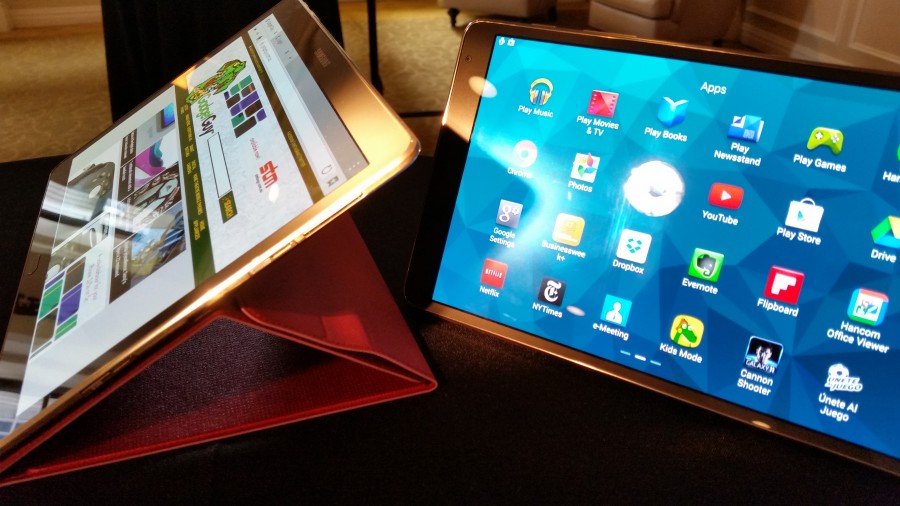 The Tab S comes with plenty of innovative features that will likely appear on the next iPad.

First, there’s the same fingerprint scanner found on the Galaxy S5 phone, which stores up to 3 fingers, and also works with PayPal for fingerprint-only purchase approvals.

The SideSync 3.0 app is quite clever, and enables easy drag-and-drop wireless file sharing between Galaxy devices, however what really shines is how you can view and run all of your phone’s apps, as well as make and receive calls on your tablet.

So if you have your Galaxy S5 phone in the other room, you can see a ‘virtual’ version of it on your tablet, and answer a call that might have come through from the other room. Even play a game straight from your phone’s desktop. All you need is for both devices to be on the same Wi-Fi network.

The Remote PC feature lets you transfer information to and from your desktop computer as well.

The Tab S comes with a child-friendly kids mode that lets kids play games and doodle in a restricted environment.

It’s good to see that Samsung has adopted the Ultra-low Power mode from the Galaxy S 5 Smartphone. This shuts down all but the most essential services to provide maximum battery life.

You can choose to have access to up to 6 apps, and when we tested it, the battery charge was predicted to last 26 days.

The Tab S includes Family Sharing, meaning that you can have up to eight different user profiles, all with unique passwords, fingerprints, apps and home screens for different members of your family.

Sadly, in Australia, we won’t be able to enjoy the fact that the Tab S will play Netflix in 1080P, but it also provides 1080P YouTube playback.

Essentially, this delivers magazines optimised for tablet screen sizes, directly to the device.

Currently, Samsung is working with publishers such as Conde Nast and the New York Times, and is in talks with Australian publishers, though no titles have been confirmed for the Australian market (Paper Garden will be available in the US, UK, Brazil and Korea at launch).

The Tablet S’s hardware specifications include 16 and 32GB of storage, both of which are expandable via microSD cards to 128GB.

Processing is powered by either an Exynos 5 Octa (1.9 GHz QuadCore ＋ 1.3 GHz Quadcore) CPU or a Qualcomm Snapdragon 800 2.3 GHz Quadcore, depending on the region sold, with no confirmation yet for Australia.

There are both Wi-Fi only and Wi-Fi plus LTE models, with the Wi-Fi including support for 802.11ac and MIMO for ultra quick data transfers, while the 4G LTE version runs Category 4 connectivity, which is rated for as much as 150Mbps downloads on some networks.

There are two cameras – a 2.1 megapixel one on the front, plus an 8 megapixel rear-facing camera with an LED flash.

There’s plenty of software to get you started, most of which you’ll be familiar with if you have another Galaxy device, including Samsung’s latest Gear Fit and Gear Manager for synching with its smart watches.

On the accessory front, there are three case options.

The first, called the Book Cover protects both the screen and rear casing, and provides three viewing angles, ideal for watching videos, reading or typing. Then there’s the Simple Cover, which only protects the screen, and is very thin and lightweight. There’s also a bluetooth keyboard, where the tablet fits into a groove near its top edge, and provides a decent typing action.

Pricing and availability have not yet been set for Australia, but announcements are expected soon. In the US, the 8.4 inch model with 16GB costs $399 while the 10.5in 16GB model is priced at $499.

Valens Quinn travelled to New York to attend The Samsung Unpacked Event as a guest of Samsung.