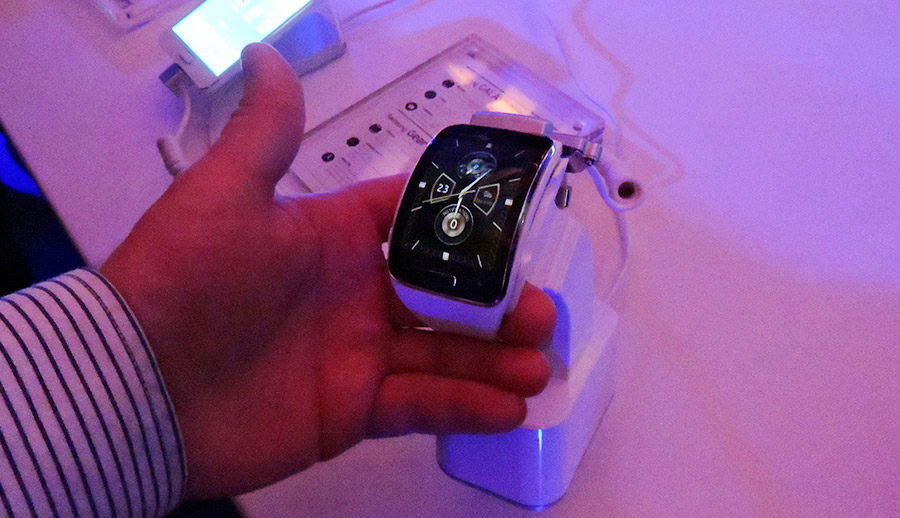 Samsung’s next watch is a phone, with the Gear S in November

Need a watch? And a phone? How about if the two are merged? Samsung is revisiting the idea of a converged gadget, and is even going to bring it to Australia, as we find out in a hands-on with the Gear S.

Smartwatches are all the rage at the moment, but they tend to need a smartphone to work, relying on Bluetooth to send calls, texts, and other notifications through the screen on your wrist. But how would you feel if you didn’t even need to bring the smartphone, and could rely solely on the watch?

Samsung is heading this way, reviving the phone-watch concept with a smartphone-watch called the “Gear S,” an idea which takes the second screen on the wrist and gives it a SIM card, making it possible to do all the things a smartwatch can do, and yet also make phone calls separately from the phone.

The SIM card slot sits underneath a 2 inch curved AMOLED touchscreen, which is really the star of the show, providing a big screen that is curved slightly to match the contour of your arm, with the Tizen operating system running here.

While it’s not Android, the Gear S will still come with features designed for taking the world with you on the go, with health handled through a Nike+ running app, GPS, and Samsung’s own “S-Health” software used on its Galaxy smartphones.

Some of the web will come with you, too, mostly from news and weather, and there is, of course, the ability to make phone calls, talking into your wrist like you can on Samsung’s Gear smartwatches (you know, the ones without SIM slots).

These features will join Facebook and PayPal support, and some S-Voice functionality to use your voice to answer messages, because while there’s an on-screen keyboard, we can only imagine what typing on a two inch screen will be like and anticipate voice-to-text will be a whole lot more useful.

And there will even be Swarovski bands for the Gear S, if you’re so inclined to have something sparkly follow you along with something highly interactive.

Even though there’s 3G functionality with a SIM, the watch still has to talk to a Samsung smartphone to work, still a requirement for Samsung smartwatches, so be sure to keep that in mind if you own another product and like the look of Samsung’s Gear S.

Hands-on with the watch, and Samsung’s first small curved smartwatch screen is an interesting looking product, though a very big one.

We’re still not sure we’re game for the idea of speaking directly to the watch, but we’re sure a Bluetooth headset could help out here, and there are plenty of those out.

If Samsung’s Gear S sounds like a possibility that grabs you, you’ll be pleased to hear that it is coming to Australia, hitting our shores in November for a recommended retail price of $449.