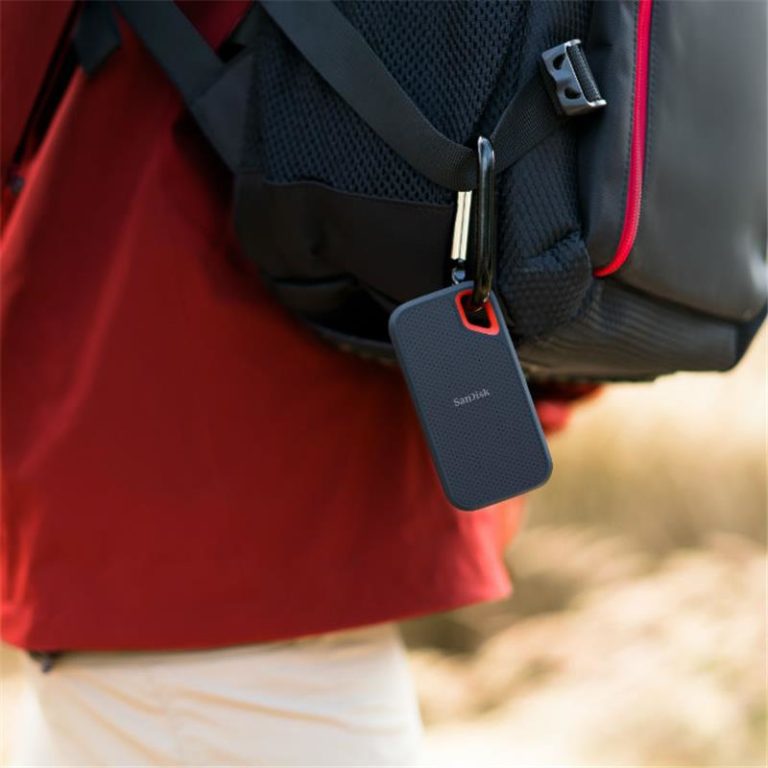 The SanDisk Extreme portable SSD is one of the smallest, fastest, toughest external solid-state storage devices in 250GB to 2TB capacities.

SanDisk is the consumer flash memory company of hard disk maker Western Digital (WD). It makes memory cards, USB flash drives, DRAM, portable media players and solid-state drives. In a market share sense Samsung is the leader in this arena by a long way, Intel (about half Samsung’s volume) then SanDisk, Micron (Crucial) and Toshiba (now part owned by Seagate) all fight it out for number three spot.

That is no comment on quality or reliability – all flash products by class have similar specifications.

Most portable SSDs use the SATA 6 interface over USB-A 3.0 (2.0 backwards compatible) or USB-C, so the interface limits maximum speeds to around 500MBps.

IP55 and rugged means almost dustproof (but its solid state, so that is not material) and withstands water jets (rain) – it is not waterproof. It can withstand up to 1500GH (2m drops) and vibrations.

Using USB-A 3.0, we achieved 442/449Mbps sequential read/write. The SATA 600 interface may be 750MBps, but the USB-A 3.0 speed is 625MBps half-duplex, so this SSD controller is really pushing the limits. It also did quite well with large file random read/writes.

Using USB-C, we achieved 560/493MBps sequential read/write – again pushing the limits of the 5Gbps USB-C 3.1 but we are not sure why random read/write of larger files is marginally slower than the USB-A results. Not that this is important!

Astute shoppers will find the 2TB at around $100 making that a reasonable 42 cents per GB. It comes with a 150mm USB-C to USB-C cable, a keyed USB-C to USB-A adapter and a three-year warranty.

In comparison to its WD My Passport Ultra SSD (GadgetGuy review here), it is twice as fast and adds IP55 and ruggedness. It is a winner.

Given the sustained speed, it should be good for creative types that need backup or even swap space for still or video editing.

Features
Value for money
Performance
Ease of Use
Design
Reader Rating0 Votes
Maximum performance from a SATA 600 external SSD
Good on larger files
Perfect for video and still camera enthusiasts
While IP55 covers most environmental isses it is resistant, not 'proof'
4.8