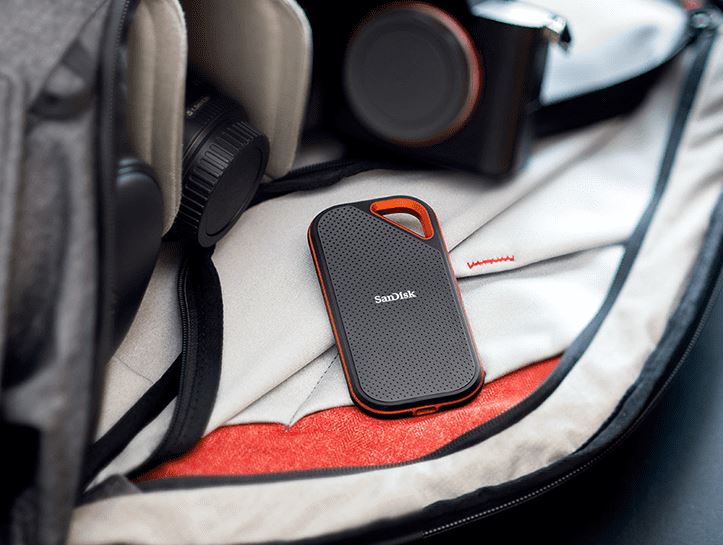 The SanDisk Extreme Pro Portable SSD may well be the fastest USB-C portable SSD we have ever tested. It reaches up to 1000MBps – more than double its SATA 6 Extreme portable sibling.

Now the SanDisk Extreme Pro Portable SSD reaches such speeds due to two things. First, the internal ‘flash’ is NVMe SSD quality and second, it needs a USB-C 3.1 Gen 2 interface (10Gbps) to achieve it.

So, there is only one word to describe the SanDisk Extreme Pro Portable SSD – spectacular!

It has an inbuilt carabiner lanyard hole.

It comes in 500GB, 1 and 2TB sizes and works with Mac and PC. 128-bit AES Software encryption for PC and Mac via SanDisk SecureAccess software is available.

If you can achieve that speed then you can edit, render and save video and stills directly on the drive.

This is fast, blazingly fast and will backup 1000MB (1GB) in a second!

The only thing to beat this is the pure Thunderbolt 3 Samsung X5 – nearly three times as fast! But you can only use it on Thunderbolt 3 devices, and it costs about twice as much!

So if you have been struggling with flash or hard disk backup that may be lucky to achieve 30% of the Sandisk speed, then this is for you.

Features
Value for money
Performance
Ease of Use
Design
Reader Rating0 Votes
If you have a USB-C 3.1 Gen 2 lappy then this is for you
If you dont have USB-C 3.1 Gen 2 then its simialr to any SATA6 backup speed
4.8