Sandisk iXpand Base for iPhone (review) 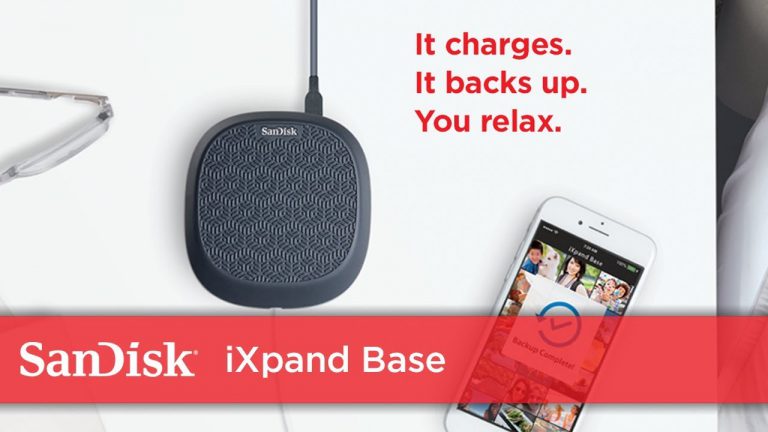 The Sandisk iXpand Base for iPhone/iPad/iPod is a cabled charge base (not Qi wireless). It can automatically back up photos, video and contacts when you charge.

I was initially excited thinking it was a Qi charger for the iPhone 8/X. But after using it for a few days, I see the logic of still using the Apple lightning cable for both data and charge.

The bottom of the base is aluminium. The top is a soft, textured non-slip rubber material. It is not an Applesque design. Neither elegant or ugly – more utilitarian.

You plug the 15W charger into the Base and your genuine Apple USB-A to Lightning cable (not supplied) into the underside of the base. The full-size SD card slips into the slot on the base. The card is local storage which is readable on a PC or Mac.

It works with any Lightning-equipped device including iPad and iPhone. We tested with an iPhone 8 with the latest iOS 11.x installed.

Using the iXpand Base

Next, you download the iXpand Base sync app from the Apple app store. This is where you set up backup to the iXpand base.

You must give it access to photos, videos, contacts and allow notifications to back these up. It does not backup anything else – music or Office documents, e.g. docx, xlsx, ppt etc. We understand that Apple iOS only allows iCloud backup of any other files or system settings.

You can choose folders to back up, what to restore, what permissions to give it and see how much space you have left. The app does share ‘anonymous user data’ with Sandisk – turn that option off.

As soon as you connect the power, the base starts back up. After the first (and lengthy) backup, it only adds new material – that is a lot quicker.

It supports multiple users when the app is on their device, and separate backup volumes set up.

The user manual is here.

Backup is incremental – it only copies new content since the last backup. Restore is everything – there is no option to restore a single or a group of files.

The 128GB U1 SDXC 1 card provided has an advertised read speed of 80MB/s but write speed (copying to the card) appears to be around 25MB/s.

We are unsure if the base supports faster U3 (95MB/s) and XCII U3 (300MB/s), but we expect it does not as the USB 2.0 data transfer speed would then be a bottleneck.

We did not try restoring times on the basis that we did not have a spare 12-15 hours to wait.

You can access the SD card on your Mac/PC via a standard USB-A to micro-USB cable or simply manually remove the card.

Crystal DiskMark found sequential read/write (no bus or other impediments) at 41/33MB/s. But this quickly deteriorated to around 5-6MB/s read and 1.7-1.8MB/s write. These speeds are consistent with the tested backup time.

iXpand Base not found

It often took up to a minute for the app to kick in – find the device and start downloading.

On one occasion the iPhone did not find the base when the power cable was connected. Repeated plugin/out did not work. We re-seated the SD card – no go. The solution was to force the App (that runs in the background) to quit and then relaunch the app.

Fast charging is a misnomer

Apple defines its iPhone fast charge as providing 50% charge in 30 minutes. Only the Base does not do that taking about five hours from 0 to 100%.

iPhone 7 or earlier use a 5V/1A (5A) charger (not fast charge) and pouring in more amperage can speed things up a little. Apple do not recommend this.

Regarding backing up while charging it is fit for purpose. But it is not a proper fast charger nor a fast backup or restore device. Given the speeds achieved it is where you put your iPhone before you go to bed.

The lost opportunity is about Qi for iPhone 8/X and wireless backup (as Sandisk has done with its Sandisk Connect 200GB wireless Flash Drive).

And with NBN unlimited data and 100/40Mb/s download/upload it may be easier to back up to the cloud. Our preference would be an OTG compatible flash drive.

Look online at Amazon or eBay for far better deals. Just make sure you get an Australian socket charger.

From 57 reviews on Amazon rating it an average of 3.5 stars. The Fakespot Trustwerty adjusted rating is two stars.

As a backup and charging device, it is fit for purpose. But the speed of backup, limited file types and charge times take the shine off what could be a good concept.