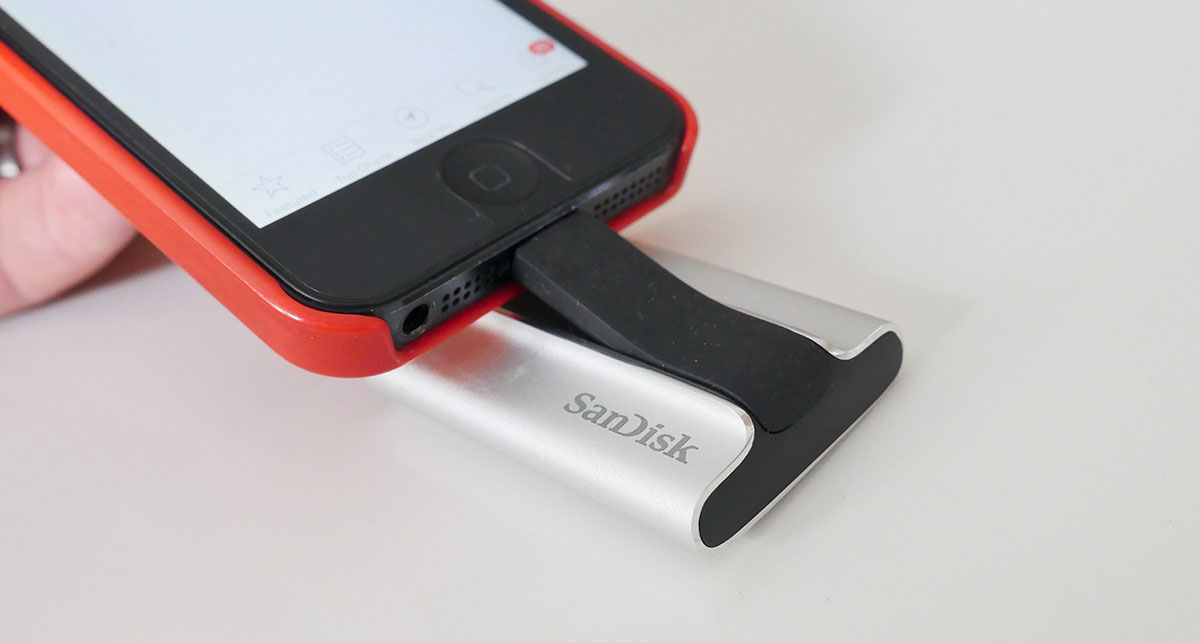 USB keys don’t get love over in the world of Apple’s iPhone and iPad, but that’s about to change as SanDisk reveals a key that works with a computer and an Apple Lightning port.

This week, SanDisk is showing off a new type of USB drive that will let you back up files from your iPhone or iPad and move them to a computer using a USB port.

It’s called the SanDisk iXpand, and it is essentially a thumb drive with a battery and an Apple Lightning port. Basically, the Lightning port means you can plug the drive into an iPhone or iPad and backup images and movies to this port, and even watch movies directly from the drive.

Once your stuff is backed up to the iXpand drive, the USB port on the drive can be plugged into a computer to move these files to your computer. Easy, and it circumvents the often arduous task of backing up files via iTunes on a computer, meaning you can move photos and movies to the drive when you’re out, about, and nowhere near a PC or Mac, then deleting them on the phone or iPad so you have more space.

“We created the iXpand Flash Drive to offer consumers a quick and safe way to move their favourite content between devices so it’s available when and where they want it,” said George Saad, SanDisk’s Country Manager for Australia and New Zealand.

It’s worth noting that this isn’t just a USB drive with a Lightning jack. That doesn’t exist, and can’t exist, due to some interesting rules with Apple’s Lightning port. As such, SanDisk has a small battery inside this port that recharges when the iXpand is plugged into a USB port, like that of a laptop.

The battery offers roughly two hours of charge, and is ready to go from the box, but this does need to be charged for the Lightning connection to work on the iPhone and iPad.

We’ll admit that we’re intrigued by this, simply because backing up photos and videos from the iPhone is something so many people ask about, and generally is a chore that needs a computer nearby. SanDisk’s iXpand could help with this, though it will come with a cost, and one that is much, much higher than your typical USB drive.

As such, you’ll find the SanDisk iXpand in Australia in either a 32 or 64GB variety, with a recommended retail price of $129 for the 32GB and $179 for the 64GB, with Officeworks grabbing the drives first, and other stores (we suspect) later on.