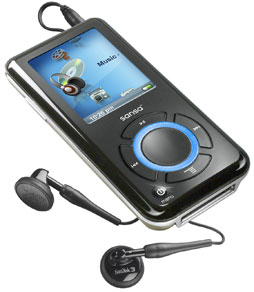 Sandisk’s Sansa e280 comes as close as anything we’ve seen to challenging the iPod control of the portable music market, with a raft of features not offered by Apple’s player, along with an ever-so-slightly cheaper price point. If you’ve heavily invested in iTunes music, the e280 is unlikely to sway your buying choice, but if you’re new to portable music and a Windows PC user, the e280 is the player to buy.

The e280 closely resembles an iPod, right down to the scrollwheel, although in the e280’s case it’s a small physical wheel with a blue backlight; iPods have been using touchscreen-style wheels for a couple of generations now. The scrollwheel is surrounded by a group of four context-sensitive buttons, and surrounds a larger all-purpose “select” button. A voice-recording button sits on the left-hand side of the player, with hold and headphone jacks at the top, and a Micro SD card slot on the right.

Setting up the e280 involves charging it via the proprietary USB cable. It’s a pity that Sandisk didn’t do what many other vendors do and just use a standard USB cable. It can be synchronised via either dragging and dropping files in Windows Explorer, or with Windows Media Player if that’s your player of choice.

Photo and Video files are supported, but they’ll need to be converted using the Sansa Media Converter software that ships in the box. Video conversion is predictably a little on the slow side, especially on a lower-end PC. Voice recording and radio is also supported, and this brings extra value to the e280; it’s possible to add those functions to an iPod, but only as expensive optional modules.

While its combination of controls isn’t as smooth as that of an iPod, we reckon that Sandisk has come arguably as close as anyone to mimicking the iPod’s ease of use ? presumably without infringing any patents in the process.

Moving between menus is slick and quick to get to grips with, and the resultant audio quality was generally good as far as portable music players go. Video playback was more of a mixed affair; for a start you’ve got to get used to flipping the player horizontally to watch video, which feels a little odd. Video playback quality is always going to be dependent on the quality of your input file, but we found a number of instances where the display seemed a little blurry on action sequences. This isn’t a massive problem on a screen of this size, but we can’t imagine watching whole movies this way.

With a price point a measly dollar below the iPod Nano/30GB Video iPod, the Sandisk Sansa e280 is a serious contender in the portable music space, especially if you’re not already an iPod owner.