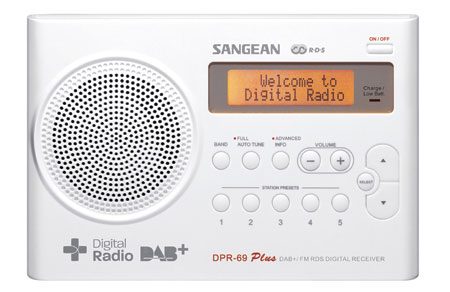 The most compact of the digital radios we’ve looked at, the Sangean DPR-69 Plus is a portable travel radio, not quite small enough to fit into a pocket, but certainly handbag-ready and only 348 grams. It’s powered by either four AA batteries or mains power, and Sangean claims that a set of alkalines can provide up to 25 hours listening on the road. It also supports rechargeables, and even includes an adaptor that allows you to recharge batteries without taking them out of the radio.

It has a single 75 mm loudspeaker for audio output, and it supports stereo headphone output as well, but has no connectors for external speakers. With power output of just 0.5 watts, it isn’t really going to be your best option when you want to crank up the tunes, and in any case the audio tends to be a bit muddy at the top volumes supported, especially for FM radio. The quality improved somewhat when we switched to DAB+ channels, which produced much cleaner sound. Connecting high quality headphones also helped, and although the volume was quite limited, AAC+ audio came through the headphones clearly and with plenty of detail.

It supports up to five presets each for FM and DAB radio, and switching between channels is easy and fast. A logical control system is supported by a simple backlit two-line LCD showing the current channel and any radiotext that might be associated with it (commonly news updates or currently playing information).

It’s not a pretty radio, nor is it the source of the highest quality audio on the market, but it is just about the most portable digital radio you can get right now, suitable for campers and travellers or for workers who tend to move about during the day. Given its lack of extra features or external outputs, however, it feels a little pricey for what amounts to a basic portable radio, the FM equivalent of which would cost you half as much.

Overall
Features
Value for money
Performance
Ease of Use
Reader Rating0 Votes
Portable and light; Easy to use
Weak-ish speaker
3