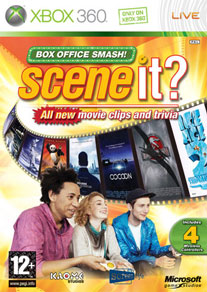 ‘Casual’ games are still taking a while to take off on the Xbox 360 – while the machine has attracted plenty of quality developers for more traditional gaming markets, such as fans of action shooters, sports and driving games, the 360 has yet to match its console rivals for games that appeal widely to those looking for entertainment that doesn’t demand as much commitment. Even the most popular Xbox Live Arcade games are usually the most ‘hardcore’ offerings, with high difficulty levels and quite unforgiving game mechanics.

There’s still no decent ‘Buzz‘ equivalent, offering fun and accessible general knowledge quizzes on Xbox 360 but there is ‘Scene It? Box Office Smash’ from Aussie developer Krome Studios. As the name suggests, this is very much a movie-focused quiz game, which will immediately put some people off, but it’s definitely worth a look. Considerably improved over its predecessor, ‘Scene It? Lights, Camera, Action’, Box Office Smash, or ‘BOS’ offers the very significant addition of online play.

First impressions of the game aren’t great, with the terrible pun in the game title carrying over to some quite horrible voiceover work during the quiz itself making comments that are often stupid, insulting or both. For a movie quiz, too, it’s odd that many of the questions following the watching of a movie clip should be based on the audio – that is, what the characters were saying, rather than what you watched, somewhat defeating the point – and unlike its PlayStation competitor, Buzz, Scene It uses the same mechanic throughout to answer the questions; that is, you hit the big buzzer button to stop a countdown clock, then a coloured button for the answer, which isn’t very imaginative.

For us, though, the weirdest decision in terms of game design has to be the awarding of bonus points at the end of each round, but for quite ridiculous reasons. There are the usual ‘most correct consecutive answers’ or ‘fastest response’ style awards, which make sense, but then you have ‘slowest answer’ or ‘most wrong answers’, effectively rewarding players for being rubbish. No doubt this was done for play balancing reasons but it can become quite farcical – someone being given 2,500 points for ‘last place 3 times in a row’, for instance, which had the effect of catapulting that player into the lead!

Get past all this though, and the superb wireless buzzers you use to participate, the constant pressure of a countdown timer, meaning you lose possible points the longer you take to respond, some decent movie clips & questions and the great online play combine to give a fun experience. Adhering perhaps a little too literally to the ‘party game’ concept, because the lack of diversity and limited content mean this is most enjoyable only as an occasional game to produce when you have the gang over for drinks and frolics rather than something you could play daily for weeks on end to help you with the pub quizzes down the local, Scene It? Box Office Smash is nonetheless worth picking up if you’re on the lookout for entertainment that is fun without being too demanding or stressful.