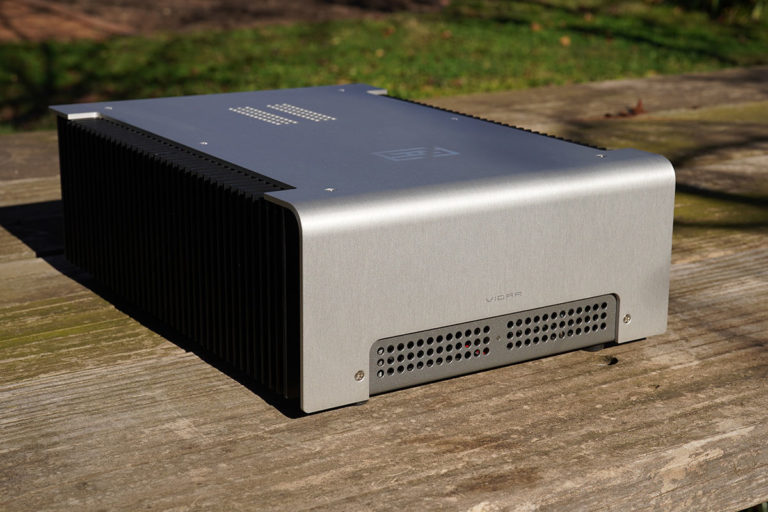 It’s ever so cool to be “disruptive” in industry. You can offer fancier functions or packaging or style and be lauded. But what if you just choose an irreverent business name and engineer solid gear while selling it at a low, low price … at least by industry standards. That brings us to the Schiit Audio Vidar stereo power amplifier.

There are two kinds of stereo gear in the world: audiophile gear, and the rest. You can get fine, involving sound from any number of stereo systems, priced from the high-hundreds of dollars up to the several thousands. But they typically won’t offer the sound that thrills audiophiles. I count myself amongst that strange breed, although I confess to being more tolerant of not-quite-audiophile systems than many of the species.

Audiophile equipment produces a sound quality that is kind of magical. It isn’t just a natural and effective tonal balance. It isn’t just accurate stereo imaging. It’s a recreation of the original content on the recording. It is equipment that allows an aural rendering of a recording that makes each element sound like it’s actually there, in that space in your listening room.

There’s no end to the number of rabbit holes into which one can descend in seeking the ultimate realisation of all this. There’s plenty of snake oil-like stuff that’s marketed into this space.

Which in a strange way brings us to the Schiit Audio Vidar. This is an audiophile-quality power amplifier. But there’s no snake oil here. It’s built on sound engineering principles. And it’s unusual in two ways. First, it’s reasonably priced. Okay, $1,600 may not seem “reasonably priced” if you’re not familiar with this kind of thing. But take my word for it, it is.

Okay, don’t take my word for it. On the website for the retail outlet associated with the importer of this amp, only one lower-priced stereo power amp is listed – and it’s a rather low powered thing. Above the Schiit Audio amps, the prices start at $3,200 and reach as high as $18,000.

What is a power amplifier?

The other way in which the Schiit Audio Vidar is unusual is that it isn’t made in China or some other low-cost nation. It’s actually made in the USA. And it comes with a five-year warranty.

A power amplifier is a device that takes a “line level” signal and amplifies it so that it can drive low-impedance loads, which is what loudspeakers present to an amplifier. You may remember old-fashioned stereo amplifiers. They were typical integrated models, which included a stereo – two channel – power amplifier, but also a preamplifier. A preamp provides volume control and allows the selection of inputs. Some preamplifier sections even include tone controls and other sound shaping processes.

A power amplifier has none of that. You plug the output of a preamplifier into the power amp. The power amp’s limited job is to make the attached loudspeaker do what’s supposed to do. Obviously, a big user of power amplifiers are audiophiles but they have other roles.

In home theatre, for example, some home theatre receivers have extra output channels for more surround speakers, but don’t have all the amplifiers required to run them. You can add a power amp for that extra functionality.

The Schiit Audio Vidar produces two channels of sound, each rated at 100 watts into eight-ohm speaker loads. Let’s get this out in the open up front. There are many devices which claim to deliver 100 watts, including plastic things from the big retailers. You can probably extract the rated output at a high level of distortion – typically at 10% total harmonic distortion. (Unless the rating is “Peak” or “Dynamic”, in which case I defy anyone to obtain a valid measurement meeting the claim.) By contrast, the Schiit Audio Vidar’s 100-watt rating is for the full audio band – 20 to 20,000 hertz – at a THD level of less than 0.01%. And it’s continuous, not peak or momentary.

Furthermore, if you halve the impedance to 4 ohms the Schiit Audio Vidar is rated to deliver 200 watts per channel. And it also supports a bridged mono mode which is rated to deliver 400 watts. In that case you’d want to buy two of them, one for each channel. (If you’re using the bridged mono mode, then minimum speaker impedance is 8 ohms, not 4).

That’s what the company says, but is it real?

Let me dwell on that 4-ohm output for a moment. All else being equal, if you halve the impedance then the output power doubles. It’s as simple as that. Except in the real world not all else is equal. In particular, limitations in the output stage’s ability to supply high levels of current typically result in much less than a doubling. Indeed, driving 4-ohm loudspeakers is so hard that most home theatre receivers have a special setting for use with those speakers. That setting typically reduces the power supply voltage to the output stage in order to limit power output to the same delivered into eight ohms.

But the Schiit Audio Vidar does, at least according to the company, double its output into four ohms. That speaks of a solid overbuild in capability.

Well, I can’t really let those 250-watt 8-ohm resistors in my cupboard go to waste. So out with them and with my oscilloscope and voltage meter and my 100 hertz, 1002 hertz and 10,000 hertz test sine waves. Into 8 ohms, the Schiit Audio Vidar delivered at least 134 watts at all three frequencies before clipping. Maybe more. I was using the Schiit Audio Saga S pre-amp, and its level control operates with 1dB steps. That means the actual range of output was somewhere between 134 watts and 168 watts! (I have now realised that I need an analogue level control for this test! One’s on the way to me for future tests.)

And what about 4 ohms? I measured 212 watts or better. The same imprecision of the 1dB steps was in play, so the correct result is somewhere between 212 watts and 266 watts.

The screen-print on the back of the Schiit Audio Vidar calls it an “Intelligent Power Amplifier”. Intelligent? In what way?

Self-protection is the main thing. When I measure the output power of an amplifier, I simply connect the speaker outputs to those mighty resistors and turn up the level until just before clipping, as shown on my oscilloscope. All went well until I pushed the 10,000 hertz sine wave into clipping, whereupon a relay flicked inside the Vidar and its front light started slowly flashing. To fix it I just switched it off for a few minutes.

The amp monitors its output stage. If it gets too hot, is called upon to deliver a dangerous amount of current (typically due to a short circuit) or if there’s simply too much DC in the signal, it switches the amp to a protection mode. Off and on again is usually good enough to get things going again, although if it’s a heat condition, you may need to wait for things to cool down.

The bridged-mono capability is interesting. All of the previous amplifiers I’ve seen with bridging capability have used a switch. The Vidar doesn’t. For regular stereo operation, you use the two unbalanced RCA sockets for your input. For mono, you must use the single balanced XLR input.

Apart from that, not too many smarts are required. Indeed, there are no controls at all apart from the big power switch on the back. The amplifier does not have a trigger input for switching on or off. When not in use, and while switched on, the Schitt Audio Vidar uses about 40 watts of power. That’s in the nature of Class A/B amplifier designs.

I have a pair of VAF Signature I93 loudspeakers. Not the current version but the original ones. They have a rated impedance of a shockingly low 3 ohms. But the Schiit Audio Vidar happily drove them to ridiculously high levels, loping along with comfort. Just as importantly, it exercised great control over the two 200mm bass drivers in each speaker. That’s important because these things handily go all the way down to 20 hertz.

Those loudspeakers simply don’t sound all that great at low volumes. But wind them up and they become wondrous. The Schitt Audio Vidar was up to the task, driving them to masterful levels with not the slightest hint of stress. Between notes, the amplifier – and speakers – were utterly silent, allowing a first-class revelation of detail in the sound.

Playing things like Billie Eilish’s When We All Fall Asleep, Where Do We Go? the extraordinarily powerful bass in the recording was fully realised by the Vidar/VAF combination. And fully controlled. It was tight. With more subtle material, such as Schubert’s String Quintet in C major, the Vidar proved itself capable of true delicacy and sweetness.

I’ve kind of run out of things to say about how the Vidar performs, because there’s simply nothing to negative to say about it. What it does is drive speakers properly, while itself remaining utterly transparent. I doubt that there are many speakers that it can’t bring the best out of.

Want to go full audiophile but don’t have tens of thousands of dollars to devote to goal? Well, the Schiit Audio Vidar is a very good starting place.

The amp is available from specialist high fidelity retailers or online from here. The company website for the product is here. We haven’t done a lot of reviewing of VAF Research speaker here, but what we have done from the Sound Australian firm is here.

Features
Value for money
Performance
Ease of use
Design
True powerhouse
Very good value for an audiophile amplifier
Should drive pretty much any speaker
No trigger connection for auto on/off
4.8