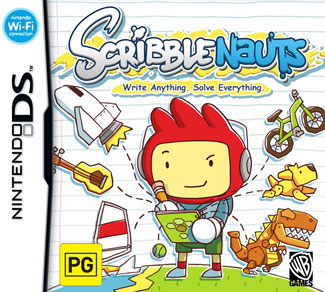 Certainly one of the most innovative games to be produced in a long while, Scribblenauts by developer 5th Cell begins as an utter delight. A puzzle game at heart, the levels are split into ‘action’ or ‘puzzle’ challenges, both requiring you to negotiate the level by creating and using objects.

And that’s where the magic of this particular title lies, because in creating those objects, you’re only limited by your own imagination – or the built-in word list. Simply type in a word on the notepad and – hey presto! – what you’re just typed appears just above your head, ready for you to use. Doesn’t matter if it’s a jetpack, a pair of skis, a snake, a mouse (it even asks you if you want an animal or electronic version!) or a camp bed; the game will conjure it up for you and place it in your world, ready for you to see what you can do. This is undoubtedly very clever tech, and the raison d’être of the game, with the gameplay generated from the faceoff between the task at hand and your own ingenuity.

There are apparently over 22,000 nouns in the game’s repository, with certain rules you have to obey (no proper nouns, no swear words, etc) when choosing to create an object. But unfortunately that’s no match for the might of the English language and its vocabulary of over 600,000 words, as you’ll no doubt discover very early on. Eager to avoid using weapons (because you get bonus points for doing so), I opted for a lasso to retrieve a cat in a tree, but that wasn’t recognized and nor was the alternative spelling, ‘lassoo’. While 5th Cell has worked some very clever interactions between created objects, there are also plenty of problems when it comes to fulfilling expected behavior – a fishing rod, for instance, was not able to help me catch a threatening piranha.

But when they work – dispose of a bee not by summoning up a gun or catapult to dispatch it (too easy, no imagination!) but rather by bringing a spider into the world and letting it eat the bee – the game feels positively gleeful. It’s all brilliant fun, despite a handful of annoying control issues and mystifying physics: screen tapping can result in your character trying to interact with something rather than move, a newly-created object disappearing forever into a building you can’t enter, planes turning upside down and so forth, plus it’s possible to accidentally shoot – and destroy! – a flower with a pistol, given the rather scattergun approach your character Maxwell has to aiming.

But the sense of experimentation makes Scribblenauts a joy to play, and while the more erudite will soon realize the apparent infinite freedom is actually more like being allowed to run around in a videogame version of the Truman Show dome, if you treat it like a crossword puzzle where you need to learn the rules of the game and then work within them, there’s a lot of fun to be had.

And with 220 levels, you’re going to be playing this game – if it can even be called a game – for a long time, not just to solve each level but in replaying them in different ways with different solutions, pushing yourself to think of smarter of funnier ways to complete the challenges. Replay value is increased with an ‘advanced level’ that’s triggered when you revisit a level you’ve previously completed.