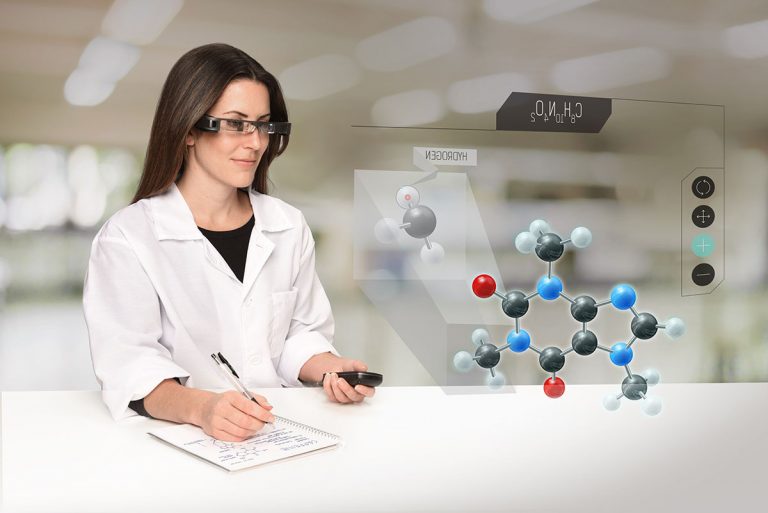 But first, what are augmented reality glasses? They are like normal transparent glasses with the ability to display things on their surfaces over the top of what you can see of the outside world. Different companies have had a crack at this at different times over the years. You may recall Google Glass, and conceptually the Microsoft Hololens will offer at least some overlap in functionality. If we ever see it out in the wild.

The glasses sense when you move your head so, with appropriately designed apps, you can do things like look around 360 stills and videos – just like any virtual reality system. Overlaid, of course, on the real world. But in a darkened room you can get rid of the real world if you like.

Epson has been selling its Moverio glasses for years and they are widely used in the real world, albeit largely in professional and industrial roles. The new BT-300 model and certain regulations relating to the use of drones, though, has seen a sharp uptick in sales in a broader category of users.

Those regulations require drone users to have eyeballs on their drone the whole time. Or, at least, the ability to see them. There are various headsets available for the user to look through the drone’s camera, but almost all of them are like 3D goggles: they completely block the user’s vision. As well as being bulky and heavy.

With the Epson Moverio glasses you can see the drone in the sky with your own eyes, straight through the glass of the lenses, while also seeing what its camera is seeing, projected onto the lenses. And unlike the nearly kilogram weight of the DJI (of drone fame) headset, they weigh 69 grams.

Yes, it works. Yes, it is effective. With my brief play it was clear that the artificial image is bolder and clearer if the real world behind it is darker, but things were still clear enough with the clouds of an overcast sky in the background.

In addition to use on drones, the Moverio glasses are finding a wide range of uses in all manner of fields. For example, Dr Gary D Grant, the Deputy Head (Learning & Teaching), in the School of Pharmacy at Griffith University, told how he uses the Epson Moverio glasses to introduce students early to the real world of the pharmacy, ambulance and hospital emergency room to give better context to their theoretical studies. They are also extensively used by the Epson-supported Mercedes Petronas Formula One racing team.

One remark by Dr Grant piqued my interest. He suggested that the previous Moverio glasses were quite good, but their limitations had been eliminated with the new model. So, I wondered, what are those differences?

Well both models work by using tiny projectors in their frames to cast the image onto the glass. The previous models used LCD technology. The BT-300 glasses use OLED. Epson calls it Si-OLED. I’m not sure if that’s merely a branding thing. Just about everything with modern electronics employs silicon. Anyway, the undoubted virtues of OLED flow through to these glasses. Instead of a contrast ratio of 230:1, the new glasses are rated at 100,000:1. Yes, some three orders of magnitude better.

The glasses are tethered to a hand-held unit about the size of a smart phone. It packs the processing smarts to make the whole thing work. In fact, the glasses are, in effect, the display for an Android device, running Android 5.1 (with a heavy overlay of Epson stuff – I couldn’t even find the usual “About” in the settings). An Intel Atom x5 quad core processor running at 1.44GHz powers the system. The system runs WiFi up to the 802.11ac standard and Bluetooth version 4.1 with support for LE (low energy) devices. I didn’t check, but I expect that means you can use them with Bluetooth headphones of your choice.

But along the cable is a small swelling with a coat clip and a regular 3.5mm socket for the supplied earphones.

It also supports Miracast – a wireless standard for sending video wirelessly. In fact, in the demos the expert drone pilot – Dr Lynh Phan – was wearing the glasses and managing the flight and video feed from the DJI Mavic drone, but the video feed from the drone was also being shown on a large screen, projected by a large Epson (of course) front projector. I noticed that a Microsoft Wireless Display Adaptor was plugged into the projector, so it was clear that the feed was coming from the Epson Moverio BT-300 system via WiFi/Miracast. In that role they would be the Miracast source. But according to the specifications, they will also work as a Miracast “sink” (that’s what tech people call the receiving device). So one could presumably wirelessly “cast” video content to the eyewear.

There’s a nine axis motion sensor in the glasses themselves, and another in the hand piece, so apps could be developed, if they don’t already exist, allowing increased control simply by moving the hand piece in space. The hand held section also has cursor control bottons, a selection button, the three standard Android keys and a touch pad for moving a glowing selection spot around the “screen”. The touch pad is multi-touch enabled, so it should support zooming and rotating and similar good things.

The built-in battery is said to be good for six hours operation. Charging looked to be via a standard Micro-B USB port.

There’s a built in camera in the glasses, forwards facing to capture what you see. This, also, is vastly upgraded. No longer the 0.3 megapixels of the previous model, this captures a useful five megapixels.

As with everything on an Android device, use is entirely determined by apps. In the units on display at the launch were apps for linking to DJI drones so that they could be used in the way demonstrated by Dr Phan. But there was also an architectural App which allowed one to look around a room. Plus a game, plus a ride with Lewis Hamilton of the aforementioned Formula One team.

I’m told that it will work with all manner of 360 degree images and video, including YouTube 360 degree content.

But I’m thinking that a platform like this – if it starts to take off – is going to be a wide open developers’ paradise, with applications so far barely glimpsed.

Yes, there are various virtual reality systems out there, and in many ways this one is largely compatible. But the light weight and the fact that it has started moving beyond the early adopter/enthusiast market into mainstream working roles has me thinking that the Epson Moverio system is not a maybe, but something here to stay.