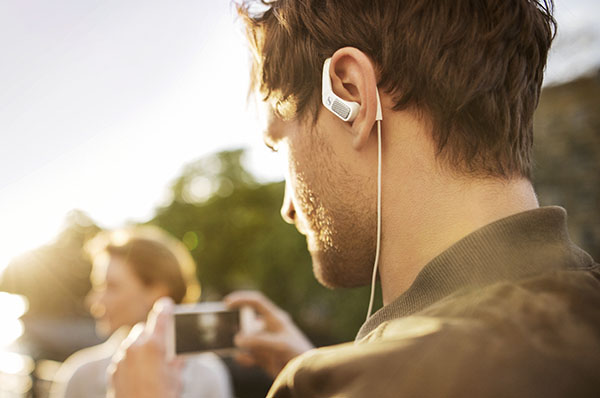 Oh, we’ve reviewed so many earphones here. But the Sennheiser Ambeo Smart Headset is something very different. It’s not just for listening, although it allows that. It’s mostly for recording. Recording in a very special way.

The Sennheiser Ambeo Smart Headset is a wired earbud set for listening to music from an iPad, iPhone or iPod Touch. And it’s also a set of high-quality stereo microphones for recording sound to an iPad, iPod or iPod Touch. The special way I mentioned is what’s called “binaural” recording. That’s a fascinating subject, and I’ll return to it shortly.

So, wired. Since iPhones don’t have analogue connections any more, it’s Lightning connector only. The cable feeds into a relatively large pod – it measures 72mm by 22mm by 9mm and weighs 12.6 grams – which houses the controls, the Digital to Analogue converter (for sound playback) and Analogue to Digital converter (for recording).

Now, the Ambeo is being sold here by Sennheiser, and the box is labelled for that brand, acknowledging only that it’s “Powered by Apogee”. Apogee is a company best known for making digital products for professional recording: DACs and ADCs and mixers and such. Apogee calls the Ambeo Smart Headset a co-development between it and Sennheiser. At least in the US, Apogee also sells the Ambeo direct. I figure that the DAC and ADC used by the Ambeo would largely be Apogee’s work.

From the top of this pod are two cables leading to the earpieces. These feature wrap-around hooks for the user’s ears. The earpieces use silicone tips – Sennheiser provides three different sizes. On the outside of the earpieces are grilles covering electret microphones. They’re for the binaural recording. Given Sennheiser’s lineage and the quality of its devices, I’d expect that it is responsible for the microphones and transducers in the earpieces.

On the right-hand cable there’s another small pod. This is to house the small microphone used for hands-free phone operation. The Ambeo is powered by the iPhone but Sennheiser says that it “will not … have a major impact on battery life.”

The Ambeo comes with a soft, cloth pouch for holding the headset when it’s not in use.

This is the truly special thing about the Ambeo headset. So, it’s worth spending a few words on what binaural recording is. Stereo sound attempts to capture the position of the musical instruments and other sound sources in space. In a basic, purist system, one puts a couple of microphones some distance from the instruments, and some distance apart. The output from each goes to its own left or right channel. Ultimately, it’ll be played back in the home, left and right channels to the respective speakers. The stereo image is produced by the mixing of the sound in the air of your listening room.

It works, but it’s kind of a fake.

Microphones instead of ears

It is this which is recorded. And when you listen to a binaural recording, you are supposed to use earphones or headphones. The sound that was just about to enter the ears of someone (or the ears of the dummy) in the recording studio is piped right into your ears.

The result is usually more “real” sounding than traditional sound recording and can be eerily three dimensional.

So that’s why it came to dominate recording technology, and virtually all recordings are binaural these days. NOT!

No, there are also problems with this. First, it’s only useful for live recording. Any music built up piece by piece simply can’t be done in this way. Neither can movie soundtracks for the most part since they are amongst the most artificially created audio, layered from many different components.

And second, headphones. Generally, binaural recordings delivered via loudspeakers sound fine, but the full effect is delivered only with headphones or earphones. It’s the same problem as 3D TV. You have to use glasses to enjoy it.

I’ve experimented with binaural recording before. Indeed, some twenty years ago. There’s been nothing stopping someone from doing that with an iPhone. The problem has been assembling suitable omnidirectional, compact microphones and putting them in the right place. What the Ambeo Smart Headset does is make it easy to make binaural recordings.

Indeed, you don’t need anything beyond your phone and the Ambeo. Not even additional software. It will work with any stereo audio software and any video camera software. I used it with the standard Voice Recorder app and the standard Camera App in video mode.

To use, you start the app, and a light glows on the main pod on the Ambeo, showing that it’s in recording mode. A little slide switch allows you to choose between normal recording levels and a muted level for concert recordings. Then you just start the app recording, and the sound is captured from the Ambeo Smart Headset’s microphones.

There’s no fancy processing to get the 3D effect. It’s a result of the way that the recording is captured, and ultimately delivered to the listener’s ears.

It is really wonderfully effective. I’d suggest you listen to this short movie (seven minutes). Filming was almost entirely with iPhones and Ambeo Smart Headsets.

While the gear was low cost, this movie still had an extensive crew. So how about a regular person? I plugged it into an iPhone, went to a nearby road, and filmed the traffic going past with the iPhone camera app. Then I went to a coffee shop and recorded the sound using the iPhone Voice Recorder app. In both cases, playing back the sound created an eerily convincing feeling.

The free iOS Ambeo app is admirably clear and provides a sensible set of adjustments. Some of the functions replicate those on the control pod: volume level and switching between noise cancellation, transparent hearing and off, and switching the recording level. There’s also a “Graphic EQ”. In fact, it’s a three position semi-parametric equaliser. There are four presets plus a “Custom” option. You can adjust three frequencies of your choice by up to plus or minus 10 decibels, at least as indicated by the app. (Only semi-parametric, because you can’t adjust the “Q” or width of effect of each band.)

I really doubt that the decibel indication on the EQ section is accurate. I found the most natural listening position was to pull everything above the mid-treble down by an indicated ten decibels. That would normally make things sound utterly dead. Listening to music on the Ambeo, it remained quite bright even in that position. The standard sound was rather too treble-forward for my taste. Dragging those higher frequencies balanced things out nicely. But I’d be surprised if it reduced them by much more than five decibels.

Meanwhile, at the other end, the bass performance was particularly strong, deep, extended and powerful.

The only wrinkle in use was with the control rocker on pod. You use that to switch the noise reduction and “transparent mode” on and off. It was very flaky for the first thirty seconds or so each time I used the headset, but then it would settle down after a while and could be used properly.

The slide control – used to set the recording level by default – could be switched through the app to perform different functions, including firing up the iPhone Camera app and the Voice Memos app.

I guess the one real weakness of the Ambeo is that it’s only for iPhone/iPad users. Indeed, head office sent me down an iPhone to use for reviewing the Ambeo. I’d like to see an Android version as well. I would have thought there’s no reason why it wouldn’t work very nearly as well with analogue connections.

But if you have an iPhone and want to get into a very special kind of sound, whether for video or just audio, the Sennheiser Ambeo Smart Headset is a brilliant way into it.