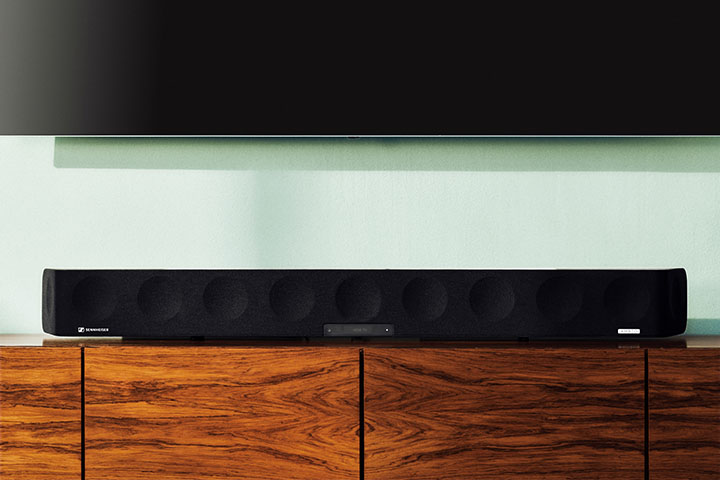 Soundbar, smoundbar, I thought when the Sennheiser Ambeo Soundbar turned up. Just another one of those. But I was soon to receive several surprises when I took a first look at it. The first surprise was its weight.

Ooof! I staggered a bit when I picked up the carton containing the Sennheiser Ambeo Soundbar. I should have read our previous write-up. It turns out that the soundbar weighs 18.5 kilograms. A top-of-the-line soundbar from one of the electronics biggies is less than half that weight.

Another surprise, while the carton was large, it didn’t have the wider section at one end used to hold the subwoofer. That’s what most premium soundbars look like in their cartons. Opening it up revealed that there was no subwoofer. All that weight was in the soundbar.

Another surprise: 3D surround. Way back when many soundbars were released promising to deliver real surround sound from the front of the room. One famous early model had forty small drivers inside, each individually powered, to project sound around the room. While some soundbars still promise surround sound, most have given up. But Ambeo seems to be Sennheiser’s name for aural 3D surround. It was also applied to Sennheiser’s 3D smart headset, which we reviewed here. The review unit has a Dolby Atmos demo Blu-ray enclosed. So clearly, Sennheiser reckons it can do surround sound.

Yet another surprise: the microphone. Most modern home theatre receivers and some high-quality soundbars come with a microphone to allow the soundbar to be automatically set up. So it wasn’t a surprise that the Sennheiser Ambeo Soundbar includes one. But this one comes inset into the end of a long 7mm-wide rod mounted on a stylish metal base. No need to look for a stand. Remember, Sennheiser is known not only for headphones. It’s also one of the world’s leading makers of high-quality microphones.

The Sennheiser Ambeo Soundbar packs 13 drivers: six 100mm bass/midrange drivers, five 25mm aluminium dome tweeters and two 89mm “full range” driver. The latter two are on the right and left ends, firing upwards at a slight angle back into the room. That is, like Atmos Enabled speakers are supposed to. These, it seems, deliver the height channels for Dolby Atmos (or DTS:X also supported). Sennheiser doesn’t specify the output power of its amplifier. (But it does mention that the unit can consume up to 500 watts peak.)

The ends are angled and on each end is a tweeter, so those two fire out wide. On the front are two more tweeters near the end, plus one in the middle. Between the left-most and centre tweeters are three bass/midrange drivers, likewise on the right side.

There are three HDMI inputs and one HDMI output. There is no on-screen display. The soundbar passes video – including UltraHD – through to the connected display. The output HDMI socket supports the Audio Return Channel from TVs.

There are also analogue and optical digital audio inputs. And, should you want it, a wired subwoofer output.

Networking is both Ethernet and Wi-Fi up to 802.11ac. Both DLNA and Chromecast are supported.

And, of course, it simply must have Bluetooth. It supports the AAC codec in addition to the standard SBC.

The auto-setup is fast and easy.

The reason that most soundbars no longer purport to do surround sound is simple. Delivering effective surround sound from a bar of speakers at the front of the room is, well, hard. There are two ways of doing it – along with a continuum of balances between the two.

The other way is to use digital signal processing to manipulate the phases of the channels. The science behind that is pretty hairy, so I won’t go into it. But this can effectively fake a diffuse sound field that seems rather like surround sound. At least, until you feed it some selected content with discrete sounds intended to emanate from different parts of the room. This system tends not to do so well with that kind of material.

I note that I’ve assessed several dozen supposed surround soundbars over the years and have found a range from almost useless to somewhat effective in a general sense.

In a moment I shall see whether the Sennheiser Ambeo Soundbar does a better job than that. But, first, what about stereo music.

What was that about no subwoofer? After setting up the Soundbar and making sure that it was receiving sound properly from the TV via ARC (ugghh, wrong cables in wrong connections – after all these years you’d think I could avoid a rookie mistake!) I just left the TV running for a while as I was doing other stuff. Since that other stuff was boring, I was wearing a pair of earbuds and listening to a podcast.

After a while I noticed a sensation too familiar to be noticed straight away. It was the deep, deep bass of a subwoofer producing sound from the TV program. Then I realised: there was no subwoofer. This was the soundbar. That got my attention.

Before giving my impressions, I’ll jump ahead and tell you what I was to later measure.

First, I measured from my listening position. I rarely do that: too many room effects. But since the Sennheiser Ambeo Soundbar was calibrated for that position, I figured I might as well start there.

With that kind of measurement you can expect a wide range of deviation in very narrow frequency bands. That’s what was delivered. But the tone of the music is indicated by the average output. On that basis, the Sennhesier Ambeo Soundbar delivered an even tonal balance from at least 60 hertz to out beyond 19kHz. That’s understating things a little, because while there was a hole in the measurement between 35 and 60 hertz, it came back strong below that to measure balanced output down to 22 hertz.

That’s kind of nuts. I’d say that fewer than half the subwoofers I measure can manage that.

All that is heavily mediated by the room, and by the position of the soundbar with respect to the various room surfaces, especially the distance from the front wall. So I put the microphone right in front of one of the bass/midrange drivers. It turned out to produce two levels. It was very even from around 150 hertz to 1,600 hertz output, and then fell off very sharply to be 20dB down by 1,800 hertz. That says to me: active high-order crossover to the tweeters. Around 3dB below that on average was the deeper bass output. That went from 140 hertz down to 29 hertz. At 20 hertz the output was around 16dB down.

I have never measured a soundbar with bass anything like that. At all.

It was a genuine pleasure to listen to music, almost all of which had the musically-significant bass delivered properly.

The bass was impressive. The volume was also impressive. This soundbar pumped out music at an extremely high level without marked distortion or other distress. At one point I switched from a movie soundtrack, which required a high volume setting, to some stereo music. That music was way too loud, to the point where I started to dart for the remote to reduce the level.

But then I hesitated, and then I took my time. The soundbar was handling it. It was clean, undistorted, in balance. Any regular soundbar would be sounding very on-edge trying to produce those levels. I pause here briefly while I fire up my SPL meter. I actually have surround music playing: Tommy by The Who, 24 bit, 96kHz, 5.1 channel DTS-HD Master Audio playing from the Universal Music Blu-ray release. The soundbar output is at 48/50. The measured volume level is averaging around 93dB (C-weighted), while the peaks are hitting above 105dB. If I speak at a conversational level, I can’t hear my voice at all. If I shout, I can barely make out my words. And it sounds great.

As I’ve indicated already, the sound balance was really very good. If you choose the ‘Ambeo’ setting, the stereo image on two channel music is widened to roughly double the width of the soundbar.

Is the Sennheiser Ambeo Soundbar a high fidelity loudspeaker replacement

But let me be clear: while the bass was impressive – no, astonishing – and the volume levels were astounding, as a hifi aficionado, I’d not choose the Sennheiser Ambeo Soundbar for my stereo listening. A decent stereo amplifier and a pair of quality bookshelf-sized speakers, amounting to the same overall price, will deliver less bass, maybe even a slightly lower volume level, but a more detailed sound, along with a tangible, convincing stereo image.

There’s more to hifi than clean, balanced delivery. It’s hard to define, but when you hear it you know it. This soundbar is truly amazing, but it doesn’t quite do that. What it does do is surround.

So, I’ve told you how over many years soundbars have tried, and largely failed, at delivering effective surround sound. Well, no more. The Sennheiser Ambeo soundbar does surround sound that far exceeded my expectations. Far? If you could quantify such a thing, figures such as twice as good, three times as good, maybe four times as good as the best I’ve ever used might be appropriate.

Now, before going on I should mention what I’m used to listening to. I have a real surround system installed in my office. At times it has been 5.1.4. At the moment it is 5.1.2. That is: front left, right and centre, surround left and right, and two ceiling-mounted height speakers. Along with a lovely Denon home theatre receiver to drive them all.

So, to start, I used the Dolby Atmos demo disc Sennheiser included (for review purposes, not distribution) with the soundbar. Being me, I went straight to the isolated channel noise tests, specifically 5.1.2.

Was the soundbar bouncing sound from various surfaces? Well, the height ones I suppose, but the others? It seems unlikely.

On the same disc were several clips intended to demonstrate Dolby Atmos. They did equally well at demonstrating effective depth. Stuff sounded above, to the sides and slightly behind me. Not in the vague out-of-phase sense, but in the positioned-object sense.

Well, Sennheiser put that disc in the box. Time to go to my own stuff. I have an ancient test DVD which features a male voice panning 360 degrees around the room. Even proper surround systems sometimes have trouble with this. Soundbars? They all fall apart on this one.

But not this one. The voice went around the room – even eerily across from right to left slightly behind, slightly above me, with a smoothness that would challenge many discrete speaker systems.

I couldn’t let it rest there. Surely there must be an imperfection. That caused me to bring out the surround mix of Tommy. This one is a slightly uncomfortable listen, because for the most part Keith Moon’s drums sit in the left surround speaker. With my regular surround system this is a mixed blessing. Just about devoting a channel to drums alone results in them being delivered with a rare clarity. But it’s also a bit hard on the left ear.

And with the Sennheiser Ambeo Soundbar? No, the drums weren’t quite slightly-rear to the left. They were middish left. The Soundbar didn’t push them as far back in the room as a discrete surround system. And they were slightly splayed out. The higher-pitched drums tended to be a little further back than the deeper skins. It was nonetheless impressive.

The Sennheiser Ambeo Soundbar is a truly remarkable piece of design. I generally don’t go out of my way to recommend soundbars, but I do with this one. And it delivers that great performance from a device, not all that much bigger than a regular soundbar.

Sennheiser’s site for this unit is here.