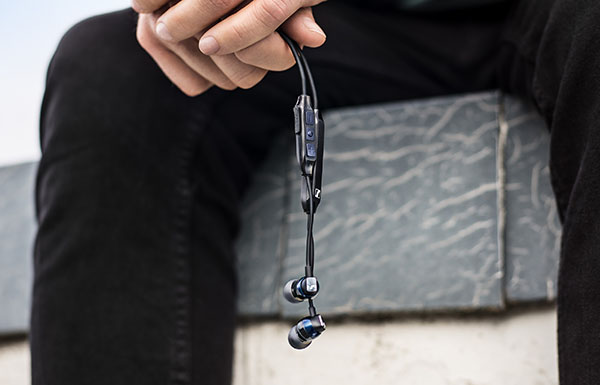 German brand Sennheiser covers nearly the full range of headgear. All the way up to the $50,000+ Sennheiser HE 1 Orpheus headphones. The Sennheiser CX 6.00BT earphones aren’t in that league of course, but they have that pedigree.

These are compact Bluetooth earbuds, with the two buds joined by a cable. The said cable measures 60cm. The buds themselves are tiny. They have a round shape with a diameter of just 12mm, and their bodies are only 13mm thick.

Sennheiser includes four sizes of silicon tips (plus a Micro-B USB cable for charging). Also included is the hard plastic box in which they are delivered, which Sennheiser calls a “Carry Case”, with the apparent intention that you carefully fold the earphones through its channels to hold it when you’re travelling. I don’t think so.

These aren’t sports models. They’re not targetted at sweaty people, so Sennheiser doesn’t talk about IPX ratings. Instead, they seem to be more targeted at listeners who want quality sound in an inconspicuous package.

For that reason, they support the higher quality aptX codec. That seems to be a Sennheiser thing. A welcome thing.

That allows for improved audio quality over Bluetooth connections than the standard SBC codec. That won’t help users of Apple devices, because iPhones and the like use AAC for higher quality sound rather than aptX. But most premium Android phone models support aptX. All others, and Apple devices, will fall back on SBC. See here for which phones support aptX.

The Sennheiser CX 6.00BT earphones also support the Low Latency version of aptX. Latency is a fancy word for delay. Usually, there’s an awkward pause in Bluetooth sound. I checked this out quickly, recording a video on my phone of me clicking my fingers. On playback, it certainly seemed as though the sound was in excellent synchronisation with the video when I listened through the Sennheiser CX 6.00BT earphones.

Sennheiser rates the frequency response of these earphones at 17 to 21,000 hertz, and their maximum output level at an ear-pummelling level of 112dB. Note, though, that the 112dB is for a full-scale signal. If the music on your phone was originally recorded at a low level, it might not quite rise to satisfying levels. That can often be the case with classical music.

There are two pods on the cable, each about 55mm from the respective bud. The one on the left has no controls or connections, so I assume it carries the Lithium-Ion battery. The right one has a Micro-B USB socket for charging under the usual fiddly rubber cover. There are three buttons on the right-hand pod for play/pause and volume control. And for answering calls. I couldn’t work out a way to invoke Google Assistant from the earbuds.

There’s no apparent way to check the battery level in the Sennheiser CX 6.00BT earphones. If you’re away from power, you’re not going to know the charge state of the earphones until they start issuing audible warnings about ten minutes before switching off for lack of power. They’re rated to last six hours on full charge, and that was pretty much what I experienced.

Happily, they charge quickly when they do run down. Just ten minutes of charging will give two hours of playback. A full charge takes ninety minutes.

There’s a free Sennheiser app for Android and iOS called CapTune. This is a music player and also has EQ functions in case you want to adjust the tonal balance of the earphones.

I find myself a little conflicted by the Sennheiser CX 6.00BT earphones. The reason? They are brighter than I prefer. By which I mean, they emphasise the higher frequencies beyond what one would experience with high-quality loudspeakers. I’ve argued for a while that the tonal balance of headphones and earphones must necessarily be different to that from loudspeakers. Earphones, in particular, are injecting the sound directly into your ear canals without it having to negotiate the pinnae of your ears (they’re the flappy, visible bits on the sides of your head).

But here’s the thing, those emphasised higher frequencies were clear, clean and seemingly completely free of any distortion. These earphones are using first rate drivers.

So, unlike many earphones with a tendency towards a bright acoustic presentation, they aren’t tiring. The brightness tended to add detail to the sound.

Listening to Les Claypool’s 2014 project with former M.I.R.V. guitarist Bryan Kehoe, Duo de Twang, the guitar and mandolin were bright and forward in the mix. But the solid bass of the earphones tended to balance things out, giving Claypool’s bass the place it deserves.

Hmmm. Brightness? An upper-frequency emphasis? Torture test time! I went to Laura Marling’s album Once I Was an Eagle. Marling’s voice is very closely miked, delivering an occasionally astonishing intimacy. But it’s one laced with sibilance – piercing “S”s. With the Sennheiser CX 6.00BT earphones, her voice was again tilted noticeably brighter than usual, but the sibilance was not emphasised beyond that produced by the recording itself. Again, that brightness was clean and clear.

Instead, my attention was drawn anew to the violin accompaniment. The percussion, hand-struck bongos and congas, was delivered with remarkable accuracy, and everything remained clear in the mix.

Paul McCartney and Wings’ Band on the Run didn’t seem to be so treble heavy and was delivered by these earphones with a surprising amount of “depth” in the stereo image.

Next, I went to the Rodion Shchedrin’s percussion-heavy ballet adaptation of Bizet’s opera Carmen. I listened to the Chandos CD version (long since transferred to FLAC format on my network server). The massed violins were smooth and silky. The massed snares were a touch bright, but punchy and powerful. The basses and bass drums were full and powerful. The cymbals were occasionally above their station in the mix but remained clean, clear.

On balance, I’d have preferred a more restrained treble. But if you’re going to have strong upper frequencies, the Sennheiser CX 6.00BT earphone delivers them the way they ought to be heard.

For a pleasing volume level, I had this track turned up to the maximum possible level. There was no real room to push the volume higher, had I wanted to. To be clear, I think that a bit more gain would be good, just to cater for that music which is recorded at a low level.

With most modern music this wasn’t an issue, because it’s usually modulated at a much higher average level.

The Sennheiser CX 6.00BT are smart, practical and deliver almost first-class sound, marred only by the rather strong treble.

Sennheiser’s page for these earphones is here.