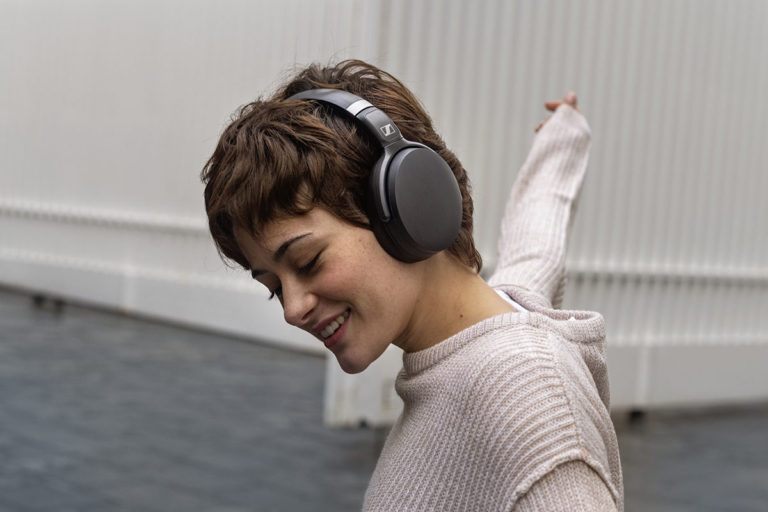 The Sennheiser HD 450BT headphones look quite similar to the earlier model and their headline features are fairly similar, but as we’ll see there are quite a few changes under the hood. They are the same price as the older model.

These are, of course, over-ear Bluetooth headphones with a closed-back design. They construction is sturdy. They are available in black or white. I was sent the white model for review and although I’m not normally especially vain, I did feel reluctant to be seen in public wearing them. Black, please, by preference! The Sennheiser HD 450BT headphones were fairly tight on my head, although that might loosen up over time. The earpads were soft and comfortable.

All the controls and connections are on the right earcup. They are a comprehensive set. Starting from the front, there’s a combo power/ANC button. A quick stab switches active noise control on or off. A press and hold powers on or off. Then there’s a 2.5mm socket for connecting the supplied adaptor cable. This can be used with analogue sources – I used an old iPod Nano. The headphones don’t need power if you use this, so if the battery runs flat you have a fall-back. Or you can use an airplane adaptor (one isn’t included) for inflight movies. If the headphone battery has power, you can use ANC in this connection mode.

The USB Type-C socket is next on the right earcup. Beyond that is a volume up/down rocker, and then a play/pause button which you can also press up or down to skip tracks. Finally, the last button is for invoking Google Assistant or Siri, depending on the phone you’re using.

And all that means that everything is controllable with direct access to buttons. Unlike some brands, you don’t have to decide whether a button will control noise cancellation or invoke your smart assistant.

The battery is rated at 30 hours with both Bluetooth and active noise cancellation running. (The earlier model was 25 hours without ANC and only 19 hours with it on.) Charge time is two hours.

The drivers are 32mm dynamic units. The Sennheiser HD 450BT headphones use some of the latest technology for the wireless connection: Bluetooth 5.0, the AAC codec if supported by your phone (yes for iPhones) and the aptX and aptX Low Latency codecs, again if supported by your phone. Quite a few Android phones support aptX. The Low Latency version is good for those sensitive to lip sync issues and who watch video on their phones. Of course, the headphones can also operate as handsfree units for making calls.

The connection stability was as good as it gets. I easily went more than fifty metres from my phone, with only one very thin angle of orientation resulting in dropouts. When I fell back to 45 metres, there were no dropouts regardless of which direction I was pointing. I could leave my phone at one end of the house and wander around the other end with a perfect connection.

In addition to the charge cable and the analogue signal cable, the Sennheiser HD 450BT headphones come with a soft carry case.

I was a bit worried with the earlier headphones about their output level. Specifically, I felt that they did not have quite enough gain with the Bluetooth connection, which would have left some music a little low in level. In the Sennheiser HD 450BT that’s not the slightest problem. Stacks of gain. You can play anything to any level you like, and indeed push the headphones well into distortion and poor sound if you want. Which, of course, you shouldn’t want. Sennheiser rates the maximum output level of the headphones at 108dB and mid-band total harmonic distortion at less than 0.3% at 100dB. They’re quite impressive figures.

In the phone’s natural state – in the next section you’ll see that you can EQ the sound using an app – the Sennheiser HD 450BT headphones produced a smooth, natural and unchallenging sound. The highs were fairly restrained and bass was strong as far down as it went, without being overblown.

On Billie Eilish’s album When We All Fall Asleep, Where Do We Go? I initially felt that the very deepest bass notes weren’t fully represented. But I’ve been listening to that album a lot recently on my main speakers which reach down below 20 hertz. Sennheiser specifies the frequency response of the Sennheiser HD 450BT at 18 to 22,000 hertz at -10dB, which suggests a modest roll off into the bass. On a repeated listening, though, I concluded that it was there, if at a slightly lower level. Most of the competing headphones seem to offer a deep bass hump, all the better to impress the naïve listener.

Sennheiser appears to have eschewed that cheap trick.

Eilish’s voice – particularly the little vocal clicks and pops captured on this album – was restrained, but sweet. I preferred to use the EQ feature to tilt the frequency balance a little in favour of treble.

The track “Neighborhood #3 (Power Out)” from Arcade Fire’s album Funeral is one of my favourite bits of music (I managed to catch Arcade Fire performing Funeral live, end to end, a couple of years ago in the US). But the recording is a trifle harsh, with a lot of mid and high frequency tones layered over the others. Almost all equipment makes it harsh on the ears. The Sennheiser HD 450BT headphones tamed all that and delivered the sound with a modern tonal balance, a strong bass beat and controlled upper frequencies. Basically, this track sounds better on these headphones than on just about anything else. So, on this, the Sennheiser HD 450BT headphones are outvoted by most of the other fine gear I’ve used. For real accuracy, you should use the EQ to rebalance the sound a little towards the upper frequencies.

Sennheiser knows what it’s doing with sound design, and particularly in headphones. Its high end gear has, if anything, a tendency towards brightness, so I’m confident that its engineers have intentionally engineered this sound balance. Don’t like it? Tilt that EQ.

Spoken voice – podcasts and the like – were similarly smooth and pleasant to the ear. Again, there was plenty of gain available so even problematic podcasts could be turned up to an easy-to-listen-to level.

Sennheiser Bluetooth headphones can typically be controlled using the Sennheiser Smart Control app. The Sennheiser HD 450BT headphones are no different, although I was wondering for a while. I already had the app on my Android phone, but it could not find the headphones … even though I’d already connected them to the phone via Bluetooth. I switched over to an iPhone and put the app on it. The app readily found the headphones (even though I hadn’t yet paired them to the phone) and managed the pairing, then took me through a few pages of instructions. The app will update the firmware when one becomes available. (The headphones were on version 5.0.0).

The only other feature it offers is a EQ adjustment. This has an odd control system in which you just push one dot around on the screen. But it works and you can save your preferred sound profiles to preset names. Once you’ve set an EQ, it’s sticky. You can switch off the headphones and when you switch them on again you’re still on the same EQ curve.

As for Android, after restarting the phone and fiddling around for a while, all to no avail, I uninstalled the app and reinstalled it and that fixed the problem.

I was quite pleased with the noise cancellation the older model, but criticised it on two grounds. The first was an odd noise. The headphones:

produced unwanted noise of [their] own when I was walking (in my usual clunky, stiff-legged manner). Indeed, at first I thought that the headphones were damaged. If I shook my head just so, or strode a bit too stiffly while on my walk, there would be this small clunk within the earpieces – the right one more than the left – which felt and sounded like some component had come loose within them.

That kind of comes with the territory. Most other headphones with strong active noise reduction also have something of a similar effect, if a bit less intense. That is markedly reduced in the Sennheiser HD 450BT headphones. Sure, I can bring it on when I shake my head quite sharply, but it was less intrusive. But it was still best to switch off noise cancellation when walking around.

The other complaint was that:

Sometimes there was a slight sensation of pressure in my ears when using NoiseGard (because, I think, the cancelling isn’t always perfect). This seems to be common to the breed when a fairly aggressive approach has been taken to noise reduction. Another reason not to use noise reduction when it’s not necessary.

NoiseGard was the name Sennheiser used to use for its ANC. It seems to have dropped it. This sensation, which tended to mark noise cancellation systems in the early days, was completely absent with the Sennheiser HD 450BT headphones.

How well does it work?

The noise cancellation was highly effective. As usual – and there was certainly no actual flying during the time I was testing these headphones – I placed myself in front of my computer and played back a video I took from a plane a couple of years ago, running the audio at around 100 decibels SPL (C-weighted). My desktop audio system is essentially flat in output from 30 hertz to 20,000 hertz.

The Sennheiser HD 450BT headphones brought the noise level back from verging on painful to easily tolerable, and made the music and podcasts I was playing far more coherent, even at reduced volume levels. However the noise reduction wasn’t as much as that with recent – typically more expensive – models from Bose and Sony.

I was very impressed with the Sennheiser HD 450BT headphones. Everything worked as it should. The sound was, perhaps, engineered for enjoyment more than extreme accuracy, but you can tweak it with the app. The noise reduction was effective. Definitely recommended.