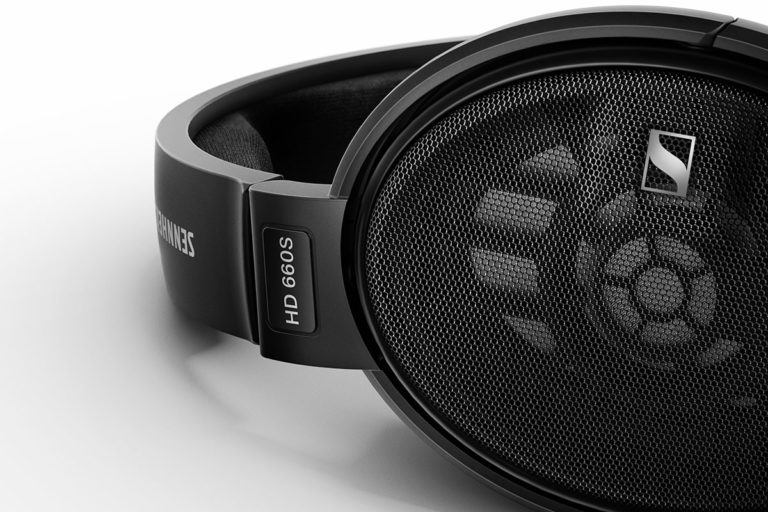 About the Sennheiser HD 660S headphones

Sennheiser has three model ranges of serious wired headphones. We looked at one of the HD 8XX series here. They are for the well-heeled audiophile who is prepared to splash several thousand dollars on head gear. The HD 5XX series are for serious listeners who can go to a few hundred dollars, but no more. The HD 600 was introduced in 1997 as an audiophile range when Sennheiser (as the company told me) “made a massive jump in tonal accuracy and lowest possible distortion thanks to [its] laminate technology and computer-aided membrane design.” The HD 660S is the latest in this series.

The headphones weigh 260 grams. They have a metal headband, with your head protected by a soft pad. The velour-like earpads are nicely padded. The grip on the head was a little tighter than the HD 560S, but they remained very comfortable.

The headphones use generously sized earcups, each sporting a 38mm driver with light aluminium voice coils. The drivers are “carefully selected and paired by hand to ensure consistently narrow (±1dB) tolerances,” says Sennheiser. They are fairly high impedance models, rated at 150 ohms. That makes them relatively immune to one of the great problems of wired headphones: the unpredictable output impedance of headphone sockets on lots of audio gear. It also means that you’re less likely to run into clipping with low-powered source devices. On the other hand, it also means less actual power delivered by most sources.

That made me interested in the sensitivity rating. Sennheiser gives a “Sound pressure level” rating of 104dB, but states no criteria. Using the same criteria as it provided for the HD 560S headphones, that would work out to a sensitivity of around 96dB for 1mW input, significantly lower than for the HD 560S. Could that mean inadequate volume levels?

No, as it turns out. Jumping between both sets of headphones, it seemed to me that the Sennheiser HD 660S headphones are actually a little more sensitive than the HD 560S model.

The HD 560D comes with one three-metre cable which plugs into the left earcup with a 2.5mm TRRS plug. The Sennheiser HD 660S headphones come with two three-metre cables. Both split so that the left and right channels can plug directly into their respective earcups. Their plugs are proprietary Sennheiser two-pin affairs of the same kind used on my old Sennheiser HD 535 headphones, which I purchased well over twenty years ago.

At the other end one of the cables is terminated in a standard 6.35mm – quarter-inch – stereo jack. A 6.35mm to 3.5mm tail is included for use with that kind of output.

The other cable? This has a Pentaconn 4.4mm TRRS plug on the far end. It’s wired for balanced operation.

What’s all that about? Well, almost all headphones use three conductors. Think of them as left and right active wires and a common return wire. There may be crosstalk advantages in keeping the signal separate both ways. (This is highly simplified. With AC there is no one “way” since the signal is going to and fro to roughly equal extents.) More importantly, that limits headphone amplifier designs. With balanced cables, amplifier makers can employ push-pull designs.

Balanced headphone connections have been around for a while, but a final connection standard has been elusive. The two most common were 2.5mm TRRS plug – but that’s an inherently low-contact-area solution – and a 4-pin XLR – which is too bulky for portable gear. Apparently Sony has recently put its rather hefty shoulder behind the 4.4mm Pentaconn plug. I’m hoping that will end up being the standard. I’ve lately been using an iFi Zen Can headphone amplifier with a socket for just this plug, so that’s what I used for most of my listening.

The price of one of those things may well stand out to you. Believe me, it’s not at all outlandish. I’ve been looking for quite a while for a balanced headphone cable suitable for use with my other main headphones, but have been deterred by the fact that $280 would have been a bargain.

That said, as the 4.4mm Pentaconn becomes more widely accepted as the standard I expect prices on that will fall.

And remember, with Sennheiser’s premium headphones, you can expect the various replacement parts to remain available for a very long time.

I used the Sennheiser HD 660S mostly with the balanced outputs of an iFi Zen Can headphone amplifier, but also somewhat with its unbalanced output. I’ve measured this unit’s unbalanced output. It can deliver over 180mW into 300-ohm headphones, and slightly over a full watt into 16-ohm loads. Both of those are massive amounts of power. iFi says it can provide even more to balanced headphones. So there were no performance limitations at the source.

And, in short, the Sennheiser HD 660S headphones proved to truly be audiophile headphone. But not somewhat strange ones like the Sennheiser HD 820 headphones, which regular people probably find too bright. No, these are simultaneously accurate, detailed, revealing and … comfortable. By “comfortable”, I’m talking about the sound, not the feel on the head (although that was comfortable as well). I found that they showed every aspect of the music, yet kept it musical and enjoyable. On Billie Eilish, the bass was enormously powerful and deeply extended. The 96kHz Steven Wilson remix of Jethro Tull’s Thick as Brick, streamed from TIDAL in MQA format, was simply exciting. When the band kicked into high gear at three minutes in, the output levels seemed limitless, while every detail remained intact.

Something a little different? Maria Wiegenled from the album Cantate Domino is performed by a soprano accompanied only by a pipe organ. The pedal on the organ was delivered with excellent authority. There was some reverberant ringing of the singer’s bigger notes, but I got the sense that this was a resonance within the venue. That was held in check, and the result was simple beauty.

So, how do the Sennheiser HD 660S headphones go with lesser quality audio sources. Particularly those of limited output levels. I used the unbalanced cable and the 3.5mm adaptor tail to listen to music being fed by the analogue conversion dongle plugged into an iPhone 8. Listening to Who’s Next, there was plenty of volume available for a satisfying performance. That was a pretty well recorded album for the day – early 1971 – but the headphones did reveal some limitations in the form of a faint sheen or smearing of the sound. I’d previously been quite unaware of this.

I switched over to listening to the same (kind of) album using the headphone amplifier, and suddenly the music was sharp and revealed transparently. Both were sourced from TIDAL. But the iPhone doesn’t support the MQA high resolution encoding of the MASTER version. So between that and the fact that the headphones were being powered by a $13.00 dongle, I guess it’s not surprising that there’d be a different sound.

And they provide a path into high-end balanced headphone audio. Seriously, find your way to a Sennheiser retailer with a stack of your favourite CDs (or your TIDAL or Spotify playlist cued up on a device) and have a listen. Chances are, you also will fall in love.