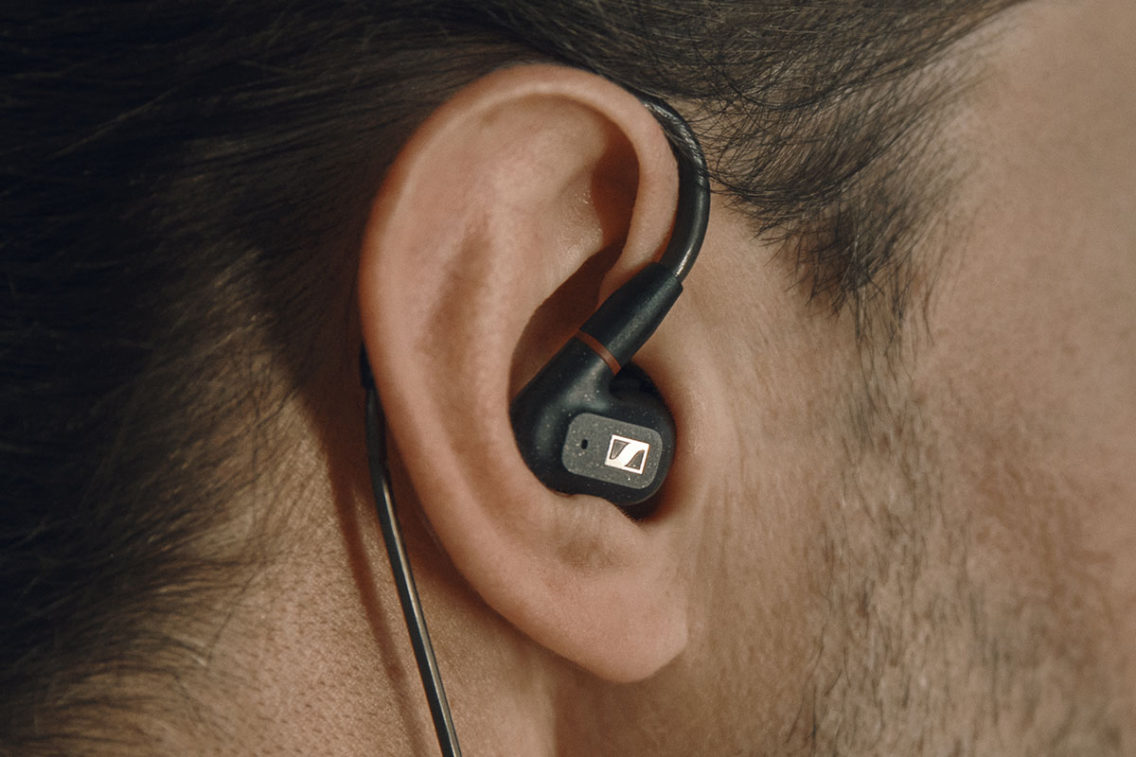 What’s in a name? We used to call them earphones. Sennheiser sometimes calls them that, but other times calls them in-ear headphones. Where quality is excellent and sound isolation effective, we tend to call them in-ear monitors, or IEMs. As far as I’m concerned, the Sennheiser IE 300 “High-fidelity earphones” are IEMs. And these are so new out that they won’t actually be available to buy until March.

The Sennheiser IE 300 IEMS are wired earphones. No Bluetooth. No uncertain radio communications potentially degrading the signal. Just real wire. The wire is 1.25 metres long and terminated, of course, in a 3.5mm stereo plug. Gold plated.

I spent many years going through a ridiculous number of sets of earphones for my portable devices, with them typically dying after nine months or so. Oh, the earphones themselves were generally still fine. It was the cable which failed, the conductor metal fatigued, sometimes at the earphone end, usually at the plug end. If that happens with the Sennheiser IE 300 earphones, well you can just replace the cable. It connects to the earphones with the increasingly common industry standard MMCX connectors. Gold plated.

But that failure should take quite a while anyway, because the cable “is reinforced with para-aramid for outstanding stability even after thousands of bend cycles”. (Para-aramid? That’s a class of synthetic fibres which includes such things as Kevlar, and which are noted for their “outstanding strength-to-weight properties”.) Also at the earphone end, the cables are set into flexible loops which you can mould around your ears to keep the weight off the buds themselves.

(Cool feature, which I hope to check out in coming weeks. Sennheiser is releasing optional balanced cables for these earphones, one with 2.5mm and one with 4.4mm plugs.)

More about the Sennheiser IE 300 earphones

The earphones themselves are small and very light – Sennheiser says 4 grams each without the cable. Inside each is a single 7mm dynamic driver, which Sennheiser describes as a “a refined version of the audio specialist’s acclaimed 7mm Extra Wide Band (XWB) transducer”. Even though the Sennheiser IE 300 earphones are put together in China, the driver itself is manufactured at Sennheiser HQ in Germany. I’m not going to try to reword what Sennheiser says about the design:

Every component has been carefully tuned to refine the listening experience: This includes an optimised membrane foil that minimises natural resonances and total harmonic distortion (THD < 0.08% at 1 kHz, 94 dB), a transducer back volume designed to minimise reflection within the housing and a resonator chamber that removes masking resonances in the ear canal for more refined and detailed treble.

Sennheiser rates the frequency response at 6 hertz to 20,000 hertz. It also rates the sensitivity – a measure of the efficiency with which the devices turn electrical energy into sound – at 124dB for one volt RMS input. Most other companies rate sensitivity for a 1mW input, so it’s not entirely certain how it compares. But if we assume that the nominal 16-ohm impedance of the Sennheiser IE 300 earphones applies, that would mean a sensitivity rating of 106dB for 1mW. (One volt into 16 ohms equals 62.5 milliwatts. 62.5 milliwatts is 18dB more than 1mW. 124dB minus 18dB equals 106dB.)

The right earpiece is marked with subtle red ring so that it’s easy to tell which way around to insert them in your ears. There are six tips provided for these earphones. They are small, medium and large in silicone, and again in memory foam.

These earphones are ridiculously revealing. I’d been rearranging my gear, so I’d had everything unplugged while I put it all in place. After everything was plugged in again, I of course fired it up and checked to make sure everything was working properly. I was about to plug in some regular headphones, but my eye lit upon the Sennheiser IE 300 earphones, which I’d received that day. It took only a moment to unpack the box, find a 3.5mm to 6.35mm converter plug of which I have several – and plug it in to a British iFi Zen Can headphone amplifier.

The jRiver Media Center app on the Mac Mini, when I fired it up, had a bunch of songs in its Playing Now section, obviously stuff I’d been listening to when I last used the Mac. I’d been diverted from the Mac by a Raspberry Pi which had been using its monitor. These were a rip of a fairly recent Japanese remaster of Alice Cooper’s album Killer, followed by a rip of an earlier CD of “Dead Babies” from the same album, further followed by some UB40 and then by some Bob Marley.

I double-clicked on “Dead Babies” and … what was all that noise? It was like the track was playing from vinyl, with a low level scratchy background. I checked. Oh, I’d been playing a rip of the original CD which I must have bought back in the 1980s. So I double-clicked on “Dead Babies” on the Japanese remaster. The sound was fuller, more rounded, and Alice’s voice was slightly more sibilant, and the overall level was much higher … and all the same noise was there. It must be in the recording.

Now, as it happens, Killer was one of the first albums I listened too extensively when I was first getting into hi-fi lo so many years ago. I must have heard this track a thousand times. Never was this noise so clear. (Truth be told, I didn’t even know it was there for the first decade and a half, because my copy was then on vinyl.)

(A note: musically the Alice Cooper band was quite at odds with the image. On stage and in lyrics – “I Love the Dead” – it was shock rock. But much of the time – “Halo of Flies” – it was pretty respectable prog rock.)

Now, getting away from Alice Cooper, I tried a bit of Schubert’s String Quintet in C Major, D.956. Indeed, I tried two versions, that by the Australian Ensemble on a Tall Poppies CD, and by the (supplemented) Alban Berg Quartet on EMI. Both of these were exceptionally detailed and dynamic, but a little on the bright side. Nonetheless, I was impressed with the delivery. I’d probably knock a few decibels of the upper treble if I’d had a suitable EQ to hand.

All that stuff is a bit old, so how about something more recent? “She” from Harry Styles’ Fine Line – a 2019 release – is an old-fashioned Blues number. (What can I say? My kids endeavour to keep me up to date with pop music.) The Sennheiser IE 300 handled this – still, with a fairly bright feel – in a revealing, detailed and exciting way. The bass was plentiful. Distortion was utterly inaudible, even at a fairly advanced level.

I also did a fair bit of listening using the brilliant Astell & Kern &Futura SE200 portable music player, using one of the unbalanced outputs. (The distributor has let me hold onto it for a few weeks. Review here.) The high sensitivity of these earphones means that with the 34 milliwatts available from this player into 16-ohm loads, they can easily push through to more than 120dB. Not that I’d recommend it for the sake of one’s ongoing hearing acuity. I also used a couple of portable DACs: the Cyrus Soundkey, which can push out 62 milliwatts, and the AudioQuest DragonFly Red, which can only manage 17mW at 100 hertz into this kind of load. Even from the latter, the level was more than adequate.

And, indeed, as I’m writing this paragraph, I’m listening to The Who performing “Won’t Get Fooled Again” from Who’s Next, playing from TIDAL on an iPhone 8 and the $15 Apple Lightning to 3.5mm Headphone Jack Adaptor. And I have to say, it’s sounding great. Moon’s drums are being beautifully rendered and the tonal balance is near perfection. Apparently this TIDAL “Master” version is remixed, remastered version. It certainly sounds far better than any recording from 1971 has a right to sound. But, importantly, the Sennheiser IE 300 IEMs deliver the goods even from an iPhone dongle.

One last thing. Before starting the music playing, arrange the cable to avoid cable noise. The Sennheiser IE 300 earphones aren’t especially bad in that regard, like all wired IEMs, they’ll be injecting any friction noise directly into your ear canals.

The Sennheiser IE 300 IEMs are lovely, lovely things with which to listen to your music Seriously. Give them a go.

Sennheiser IE 300 earphones (Review)
Lovely, lovely things with which to listen to your music Seriously. Give them a go.
Features
9.2
Value for money
9
Performance
9.4
Ease of use
9.6
Design
9.8
Positives
Excellent sound quality
Good fit
Optional balanced cables to be available
Negatives
None that we can think of
9.4
Great