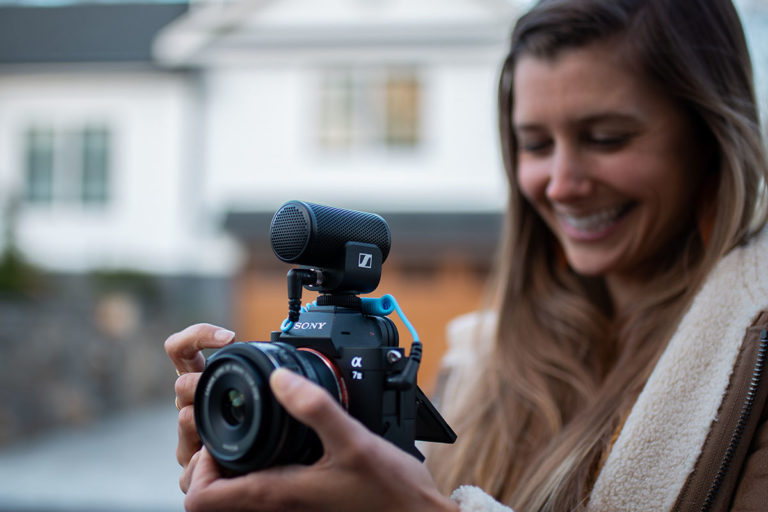 About the Sennheiser MKE 200 directional microphone

Of course, if your modern mirrorless (and even DSLR) camera can take video, it has a microphone built in. But that microphone resides behind a pinhole in the camera’s metal case. That they produce adequate sound much of the time is almost miraculous. But a simple, $199 upgrade is always welcome. And that’s what the Sennheiser MKE 200 directional microphone aims to provide.

The bulk of the Sennheiser MKE 200 – although perhaps “bulk” is a misleading term – is a perforated cylinder some 35mm in diameter and 69mm long. This is attached to a holder, on the other end of which is cold shoe mount designed to slip into the flash shoe of a camera. It has a ring clamp to make sure it’s safely attached. Underneath the mount is a quarter-inch threaded hole for use with a camera tripod. It’s good to have options. From the bottom of the mount to the top of the microphone cylinder is slightly under 60mm. And the whole thing weighs 46.6 grams. You’ll barely notice it on your camera.

Inside the cylinder is a small pre-polarised condenser microphone capsule, held in a shock mount. This has a super cardioid pickup pattern. Sennheiser rates the frequency response at 40 to 20,000 hertz. I’ve copied in Sennheiser’s graph below.

Looking at that response graph, it seems that Sennheiser had engineered with a fairly recessed bass end. Compared to 1kHz, the level is down by a dozen decibels at 100 hertz and 20dB at 50 hertz. Don’t expect deep bass.

The microphone can cope with sound pressure levels of up to 120dB. Unlike that earlier microphone, this one uses no batteries. It draws a tiny amount of power from the camera or phone. (The draw is minimal: the voltage is required to charge up the plates in a condenser microphone, but the actual current draw is miniscule.) Anywhere between two and ten volts is fine.

In the box you get the microphone, a furry wind shield which you can stretch over the microphone, a soft carry pouch and two coiled cables. One is terminated in a regular 3.5mm plug in TRS – Tip, Ring, Sleeve – configuration. This should work with all cameras. The other is terminated in a 3.5mm TRRS plug, which is suitable for smart phones with a physical connection, tablets and computers.

Both cables are terminated at the microphone end with a standard 3.5mm TRS plug, but with a locking collar for security. The blue colouring of the cable is, I think, a nice touch. The microphone is black, but the cable somewhat draws attention to the fact that you’re going a bit above and beyond in terms of sound.

You attach the microphone to the camera with the longer part of the cylinder, and the cable connection, facing towards the front.

I did my testing using the Fujifilm X-T4 camera which we recently reviewed here. The camera permits manual adjustment of the volume level, but I just left it in auto level mode. I could not find a setting in the camera to switch power on or off to the microphone jack. Given that it worked, I assume that it has power on all the time. I could not find in the camera’s manual mention of the actual voltage level.

Sometimes I find these microphones hard to jam into the camera shoe. That’s usually because the plate is fairly thick. This one slid in very easily – thankfully – but do tighten the collar clamp or it may well just slip out again.

Because the microphone is so compact, I found it very convenient, and left it in the shoe whenever there was a chance I might be taking some video.

Testing sound quality is always a little tricky. I made three A-B tests. That is, I repeated the three scenarios twice, the first with the Sennheiser MKE 200 in place, the second relying on the camera’s built-in microphones.

In summary, the Sennheiser was enormously better at rejecting sounds from behind the camera, and noticeably better at softening sounds to the side. It also seemed more focused, more precise than the built-in microphones.

You need not merely take my word for it. See for yourself how it went.

First, here’s me walking around the camera with the Sennheiser MKE 200 in use:

And then me, exactly the same but using the built-in microphones on the Fujifilm X-T4 camera. This has two pinhole microphones to the left and right of the swelling around the viewfinder.

The most obvious difference is that the Sennheiser is highly directional. I’m prattling on about something or other while directly to the rear of the microphone, and it’s very hard to make out what I’m saying. Using the camera’s own microphones, the sound is much the same level regardless of direction.

This can have its advantages, but if you’re interviewing someone outdoors, wide sound capture is the last thing you want. With the Sennheiser MKE 200 there’s still a moderate amount of sound out to perhaps 45 degrees. So if you’re doing roadside interviews, try to have your subject such that the angle to the traffic is more than 45 degrees to keep traffic noise to a minimum. Go beyond 90 degreess for real noise isolation. With the camera’s microphones, your subject will probably be drowned out by passing vehicles, regardless of the direction in which the camera is facing.

Initially I thought my voice was significantly louder with the camera microphones, but after running through them a couple of times, I’m now thinking the voice is much the same level in both, while it’s the background noise which is louder in the camera-only microphones video.

Pay attention to the difference in distance traffic noise. The Sennheiser is much quieter in the background noise.

The sounds of nature

Here’s one of the rivers near Canberra, nicely full and flowing thanks to recent rainfalls. 20 seconds of the Sennheiser MKE 200 capturing the sound:

And here is the same scene, a minute later, using the camera’s own microphones:

This time the Sennheiser microphone is markedly louder. Why? In both cases the camera is on auto level, so why it chose a higher level with the Sennheiser rather than the in-camera microphone is a mystery. Trying to tune out the level difference, I’d say that the Sennheiser has more bite, grabbing more high frequencies for a slightly more realistic sound.

How about some music

I should have gone looking for some buskers. But, you know, deadlines and such. So instead I played some music through a pair of speakers and recorded it with the Sennheiser MKE 200, and again with just the camera microphones. The music is a nine-second snippet from Laura Marling’s Once I Was an Eagle. Great record. Buy it. The speakers? A pair of Yamaha NS3000 bookshelf-sized speakers. RRP is $12,999. And, no, I did not put the comma in the wrong place.

Here it is with the Sennheiser microphone:

And relying on the camera microphones:

Again, the camera decided to set the Sennheiser microphone to a higher level than the inbuilt ones. Adjusting the playback levels as best I could, clearly there were differences. Not much level difference this time. But I’m not sure which I actually preferred. The Sennheiser had a bit more upper midrange, the camera microphones a slightly smoother overall feel, along with a more accurate bass level. Perhaps it’s the bass that the camera uses for level setting. Anyway, judge for yourself.

I just realised that in the last few sections I’ve been comparing a $199 microphone to the microphones built into a $2,999 (for the body only!) camera. The built-in microphones are really pretty good. What the Sennheiser MKE 200 microphone offers is control and directionality. And I reckon if you couple it with any budget camera (so long as it has a flash shoe), you’d get significant improvements in the sound of your recordings.

Features
Value for money
Performance
Ease of use
Design
Good sound quality
Excellent directional characteristics
Solid value for money
Includes furry windshield
I think I would have liked the bass to keep up in level to at least 100 hertz
4.8