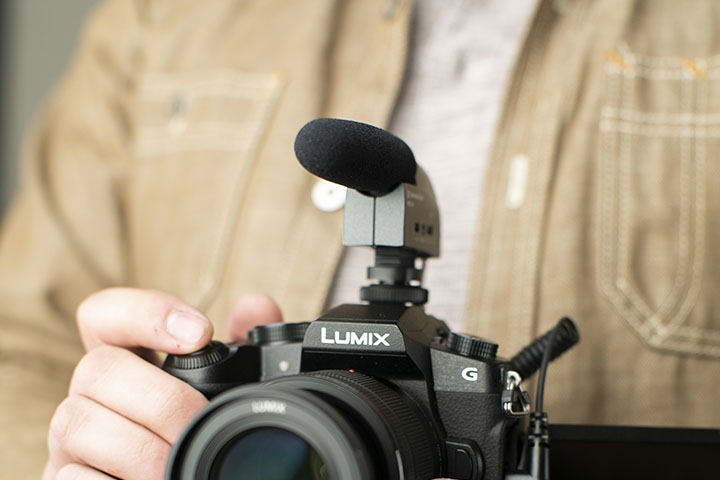 It’s astonishing the quality of video that can be captured by a modern mirrorless camera. So why not boost the sound quality to match by adding an affordable shotgun microphone, such as the Sennheiser MKE 400.

I do mean affordable. Even the normal price of $289 is quite reasonable, given that the cameras with which it will be used are typically more than a thousand dollars. But if you buy before the calendar ticks over into 2020, it will cost you a tiny $129.95. I’ll save you from doing the arithmetic. That’s 55% off.

So what does that buy you? Well, it’s a nifty little microphone that slips into the flash mount of your camera and plugs into the 3.5mm microphone socket on its side. Pretty much any camera with pretensions to capture serious video has the necessary socket.

Power is not required for the Sennheiser MKE 400. You insert a single AAA battery for 300 hours of operation.

The body of the microphone is metal and isolated from the mount by two 6mm tall rubbery stalks. These act as a shock mount, reducing the transmission of camera-handling noise to the Sennheiser MKE 400 microphone. Above the slide section of the mount is the traditional inch-wide locking disc to tighten the grip on the mount. There are no electrical contacts here, since the microphone is internally powered and the signal connection is via the 3.5mm plug. The 200mm coiled cable can easily stretch to over half a metre so should be no problems reaching any microphone input.

At the top is the microphone itself. This is a 78mm spike, protruding from a raised section of the housing. Of course it points forward. It is less than 11mm thick for most of its length, narrowing to only 7.3mm wide at the front.

You won’t see the microphone spike because you’ll have the foam cover over it. I guess this reduces wind noise a little. In any case, the spike part of the microphone doesn’t look pretty enough for you want to use it naked.

On the left side of the housing (when you’re holding the camera ready for shooting) are two switches. The front one is for sensitivity. In the normal position the microphone is rated at 8mV per Pascal of sound pressure. At the high setting, the microphone produces 20mV per Pascal. That’s an 8dB difference.

(So, what’s a Pascal of sound pressure? That converts to 93dBSPL.)

The other switch is on, off and wind filter. In the filter position the bass is cut to reduce wind noise.

Sennheiser rates the frequency response of the Sennheiser MKE 400 microphone at 40 to 20,000 hertz, and its maximum sound pressure at 126dB in low sensitivity mode, or 118dB in high.

Sennheiser isn’t all about headphones. It is a big player in professional microphones, and it has brought its expertise to bear on this entry-level model. The Sennheiser MKE 400 microphone is easy to use and highly effective. The compact size means that it doesn’t get in the way.

The switches are light enough to flick easily, yet firm enough not retain their positions securely. A small LED flashes briefly when you switch on the microphone to show battery status. A quick flash means that all’s well. When you’ve got 50 or fewer hours of life left, it remains on to remind you that you’d better replace the battery.

Some weeks ago when I was thinking about reviewing this microphone, I watched some demo videos on Sennheiser’s website in which it was compared with using the microphone built into a camera. And, really, I didn’t think there was all that much difference.

I did my first test in similar conditions: a largish, quiet room. And, really, I didn’t think that there was all that much difference. Oh, there was a slight increase in clarity, but there was pretty nearly as much reverb and “distance” in the sound. I was using a Panasonic GH4 camera – which was pretty highly regarded in its day for its video capabilities. The “Normal” sensitivity level was somewhat lower than the sensitivity of the camera’s built-in microphone. With “High” sensitivity, the signal produced by the Sennheiser MKE 400 was just a little higher than that of the camera.

For other cameras? You’re going to have to test them because the settings there are entirely matters for the judgement of the camera makers.

No, where this microphone proved itself was outdoors. I put the camera on a tripod, and set the video going with the audio being recorded in LPCM. And then from two metres in front of it, I read a short text in several different conditions: with the camera’s own microphones, with the Sennheiser MKE 400 on both sensitivity settings and both with and without the wind filter.

With the camera’s microphones, my voice was thin and reedy, while there was lots of upper bass and midrange noise from the wind – it was rather blowy. The sound was quite unusable.

With the filter off, there was a stack of wind noise whenever it blew, and it was of a very different character to that recorded on the camera’s own microphones. It was deep and powerful, full of enormous amounts of bass.

But when the wind stopped, the Sennheiser MKE 400 microphone performed an astonishing job of capturing my voice as it really sounds, in full, with realism and a near-perfect tonal balance.

With the wind filter switched on, it was clear that the bass filter cuts in quite high and quite sharply. It significantly reduced the fundamental frequencies in my voice. They tend to be from just below 100 hertz up to around 120 hertz. The first harmonic of my voice dominated. It still sounded significantly better than with the camera’s microphones.

And it did an astonishing job of reducing wind noise. Whereas with the camera’s microphones it was sometimes hard to make out my words, with the Sennheiser MKE 400 in this mode, all was clear. Yes, there was some wind noise coming though – it was blowing hard at times during the test – but it was controlled and the real signal remained clearly audible.

Then I walked around the camera ringing a small brass bell while maintaining a constant distance of a metre. The maximum sensitivity was clearly a fairly small angle of perhaps 20 degrees, centred directly to the front of the Sennheiser MKE 400 microphone. At 45 degrees off straight ahead, the sound fell away a great deal. It came back a little when directly to the sides, but fell off again and remained low all the way around to the other side, even directly to the rear. That’s pretty impressive side and rear noise rejection.

Of course, there was no sense of panning during playback. This is a mono microphone, after all.

I also did a fair bit of poking and tapping at the camera to see how much handling noise came through (I kept the wind filter off to avoid complicating things). Without the shock mount, I have no doubt that my subwoofer would have had quite a workout on playback. But it remained silent. There was a little noise in the upper bass and midrange, but how could there not be? The video visibly jumped with each tap.

With reasonable care, there should be no real issues with handling noise.

If you are planning to do a lot of outside shooting, then you can improve things with the MZW 400 accessory kit ($63). That includes a “hairy cover” to physically reduce wind noise. And it also includes a 3.5mm to XLR adaptor in case you want to use the microphone with more professional equipment.

What more can one say about the Sennheiser MKE 400 other than it’s a near vital inclusion in the camera bag of anyone who uses their camera for video work.

Go the Sennheiser’s site for the camera to take advantage of the very low purchase price this month.