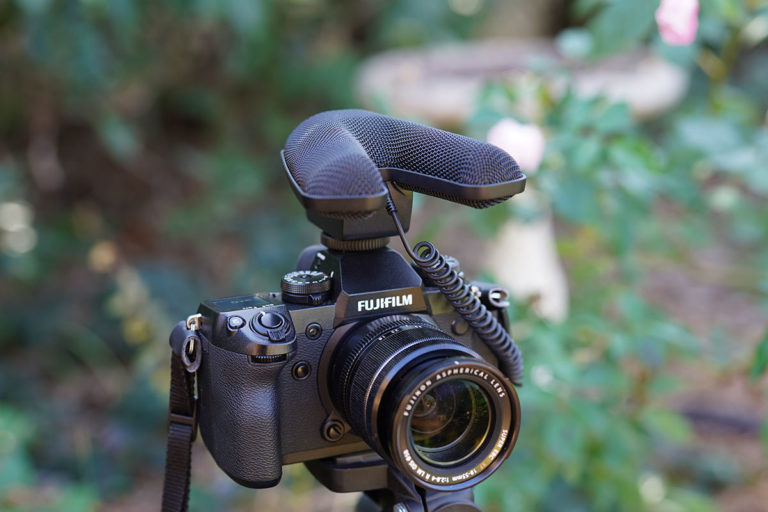 Want real stereo sound to go with your camera’s video recordings? Then the Sennheiser MKE 440 stereo shotgun microphone might be just what you need.

What is the Sennheiser MKE 440?

You may have read our review of the nifty little Sennheiser MKE 400 compact shotgun microphone towards the end of last year. Imagine a stereo version of that. Yes, the housing is different, but the features are very similar. As you can see from the photos, the microphone is in a V-shaped housing. Inside the two arms are mini shotgun microphones. Sennheiser says that the two are “aligned and matched” to give the best stereo performance.

Because shotgun microphones are being used, and because they have a very tight unidirectional pattern (super cardioid), in order to make sure the sound directly to the front is not diminished, the angle between the two is fairly narrow. That should give good sound from the front and good sound rejection from the sides and rear.

The V-shaped section is made of steel mesh, while the body of the unit is also metal, probably aluminium. The shotgun tubes are held inside the casing by a shock-mounting system, and there’s also wind protection in there.

The Sennheiser MKE 440 microphone is reasonably compact and light. It weighs – with batteries installed – 196 grams. From front to back is almost 125mm, while the width is 105mm and the height is around 60mm.

So what is this microphone for? Basically, to bump up the quality of the sound on video recordings you make with your camera. The microphone in most cameras is mono, and subject to camera handling noise and sub-optimal placement.

To be compatible with this microphone, all the camera needs is a flash shoe – a cold one is fine – and a 3.5mm microphone input. You screw the microphone it down on the flash shoe, pointing forwards. Plug it in and switch it on, and you’re right to go. The Sennheiser MKE 440 is powered by two AAA batteries, which are rated at 100 hours of operation.

The connecting cable is coiled so it’s only around 150mm long in its natural state. When you plug it in, you can move the slack to somewhere that’s out of the way with your camera and don’t have to worry about tripping over it.

Sennheiser doesn’t specify the technology used by the microphone capsules, but since it is powered it’s probably electret. There are three controls on the unit. The power switch is back-illuminated. The light changes from green to red when battery life falls to four hours remaining.

There’s also a low-cut filter which is mainly for use in windy conditions, since it reduces noise produced by the physical action of moving air on the microphone itself. You can also purchase the MZH 440 fluffy wind filter ($89) to further improve resistance to wind noise.

Finally, there’s a three-position sensitivity switch. That’s important because many, perhaps most, cameras don’t allow you to adjust recording level. It gives you quite the range: 20dB below normal, normal, and 20dB above normal.

It’s not only for cameras

I checked out the microphone on a couple of different mirrorless interchangeable lens cameras and it worked well. The normal sensitivity setting worked best in normal conditions. There wasn’t a wide stereo spread, in the sense of voices panning from extreme left of the picture to extreme right. There clearly was a left-right spread, but it was a gentle, controlled widening of the sound field. So, instead of a single, point-source of sound delivered by mono microphones, there was a more realistic, naturalistic sense to the final result.

Voices directly ahead remained clear. Noise rejection from the sides and back seemed quite good.

After checking out the microphone with a few cameras, I went a little off the reservation. I’d been meaning to record some natural sounds – sounds only, not video – so I checked out the Sennheiser MKE 440 with my old Tascam DR-2d handheld audio recorder. It has built-in microphones, but also a 3.5mm stereo microphone input. I went through its input menu and made sure that output power – designed for electrets – was switched off. It probably wouldn’t have mattered, but its best to be certain.

Then I went down to a local river and made several recordings of the water. The first turned out the best. I had placed the Sennheiser MKE 440 on a flash arm – it has both a flash shoe and a quarter inch camera style mount with which the Tascam recorder was compatible. Then I could prop the whole thing up with a towel for stability. With the first recording, I placed the whole assemblage of electronics close to the babbling waters and chose the medium sensitivity setting. I used 24-bit, 96kHz sampling for the recording – it’s always good practice to use higher resolution than you’ll ultimately need, since it helps preserve quality during any processing. Here’s a bit of that recording, downsampled to 44.1kHz, 16 bits and in MP3 format:

Back at my office in suburban Canberra, I was writing this review when I heard one of the seasonal waves of cockatoos flying overhead. I grabbed the microphone and recorder, flicked them both on, pointed the microphone towards the sky and pressed “record”. The humming noise in the background is traffic in the area. Even a shotgun microphone can’t eliminate this kind of noise that permeates our environment.

The reach was impressive, particularly with the birds. They were high in the sky. When I play back these recordings, they sound exactly like the real thing.

Mono or stereo? Each type of microphone has its place on top of your camera (or attached to your digital audio recorder). Each is way better than the microphone/s built into your camera. If you’re planning on making a feature film, go mono. You’ll be doing lots of mixing and post-production and ADR and whatnot. But for everyday video work, interviews, family films and such, then the Sennheiser MKE 440 stereo microphone gives a nicer, rounder feel to the sound to go with your picture on the screen. And it does a pretty good job of capturing the important stuff while supressing the rest.

Features
Value for money
Performance
Ease of use
Design
Fine sound
Provides a nice sound stage
Highly compatible with all kinds of gear
4.7