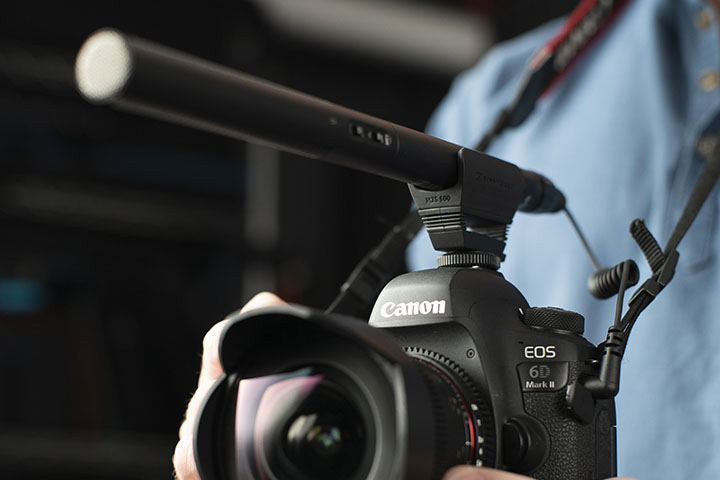 A couple of months ago I reviewed the (then) amazingly inexpensive Sennheiser MKE 400 compact shotgun microphone. That was firmly designed for cameras. But what about a higher end microphone, offering less restricted shotgun possibilities. That means it’s time to put the $499 Sennheiser MKE 600 through its paces.

Despite the model name similarity, the Sennheiser MKE 600 is more than a just bigger version of the MKE 400. Sennheiser tags it as a “microphone for video journalists”. But, yes, it is indeed bigger. The microphone can be easily pulled out of the flash-bracket adaptor. When that’s done, it’s a 20mm wide metal cylinder, 256mm long. At one end is a grille covering the microphone capsule, while vertical perforations on the left and right side extend back around 114mm from the front. It is this arrangement for admitting sound to the capsule that provides the highly directional shotgun performance.

At the other end of the cylinder is the balanced XLR output. The Sennheiser MKE 600 is a pro-level microphone, so it’s equipped with pro-level connections. Some quality cameras are able to be fitted with an expansion unit with support for XLR audio connections. For the rest, the usual camera audio input is a 3.5mm socket. Out of the box the MKE 600 does not plug into those. But since I proposed reviewing the microphone on a mirrorless camera, I asked Sennheiser to include the KA 600 adaptor. That’s has a female XLR connector on one end and a 3.5mm plug on the other, with a length of coiled cable between them. It’s priced at $29.

Sennheiser doesn’t say much about the microphone capsule, but the whole thing can be 48-volt phantom powered. Or it can be powered with single AA battery. That suggests a condenser, or at least electret, capsule. If a battery is used, it’s rated at 150 hours of life. A small switch on the top of the microphone allows the battery power to be switched on and off. If phantom power is being used, the switch has no effect. When switched on, how long the red power LED stays illuminated indicates the battery state.

Another small switch controls a high pass filter. You use that to reduce handling and wind noise. The graph in the manual suggests that bass is reduced by the filter by around 10dB at 80 hertz. Supplied with the microphone is a foam windshield. Sennheiser says that this reduces wind noise by around 25dB.  A combined foam and hairy windshield is available as an option for $99.

The microphone clips into the mount which is designed to fit a standard camera flash shoe. It includes a tightening ring. Between the flash slide and the microphone mount is a fairly compliant suspension system that also reduces camera handling noise. This seemed softer than that on the MKE 400. Combined with the higher weight of the Sennheiser MKE 600 – 128 grams, plus battery – and the greater length resulting in a higher moment of inertia, the whole affair seems wobblier. But it generated no sense of insecurity.

The Sennheiser MKE 600 uses a “super-cardioid” or “lobar” pickup pattern. That means it is most sensitive to sounds straight in front, particularly in the higher frequencies, and far less so to the sides and rear.

The good: they can reach out further, picking up the sounds you want with less interference from other sounds in the environment. The other hand: you have to direct the microphone reasonably carefully to keep the audio subject in the sweet spot.

Unlike the MKE 400, there is no sensitivity setting. But I used the Sennheiser MKE 600 with three different brands of camera and in all three cases the level seemed sensible.

Sennheiser rates the frequency response of the Sennheiser MKE 600 microphone at 40 to 20,000. The response graph in the manual suggests that at 40 hertz, the output is down by around 13dB. It rates the sensitivity of the microphone at 21mV per Pascal when used with phantom power and 19mV on the battery. (One Pascal of sound pressure is 93dBSPL.) The microphone can cope with a maximum sound pressure of 132dB with 48 volts, or 126dB powered by on battery.

As I discussed in the MKE 400 review, shotgun microphones achieve their best effect either outdoors where there are no room reflections or in large spaces where reflections are delayed and diminished. Although, they can be a help in smaller spaces if they’re unusually noisy. So I went outside for my main testing, subjecting the microphone to an occasionally firm, but not excessive wind.

I first walked around the microphone as it was mounted on the camera which was filming, and I spoke steadily. Even at 45 degrees off axis, my voice level was significantly reduced. And by 90 degrees it was enormously quieter. It remained at the same apparent level all the way across the back. There can be no doubt that the directionality of the Sennheiser MKE 600 is much greater than the MKE 400.

And that translated into greater reach. At a range of three metres my voice was clear and understandable, even with the various wind protections switched off. The foam filter was very effective and had little effect on the tone of my voice. The bass cut filter combined with the foam filter reduce wind noise to a mere whisper, but at the cost of thinning out my voice a little.

The tone was very natural and at the least broadcast quality. Using various musical instruments indoors, the capture was precise and clean and playback highly listenable.

The Sennheiser MKE 600 is quite the step up in price from the MKE 400. But it’s not a mere hobbyist toy, although it’s certainly well within the reach of the enthusiast. Really, though, it’s pushing up into the kinds of gear that professionals use … for a reason.

You can read more about the Sennheiser MKE 600 here.