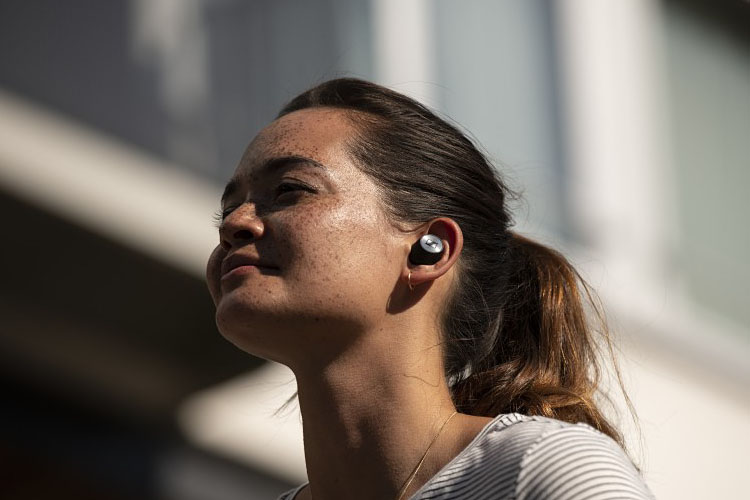 The Sennheiser Momentum True Wireless earphones are the German headphone specialist’s first foray into true wireless buds. And, as you’d expect, it’s aimed to be top of the pack.

You can tell that by the pricing. At a hair under $500, the only similarly priced wireless earbuds we’ve reviewed were from Bose. Those featured active noise cancellation. These ones don’t.

And that’s about the only feature you might miss.

The Sennheiser Momentum True Wireless buds follow the usual practice for wireless earbuds: they come with a charge case. The batteries built into the buds are rated at a four hour battery life. The case can refill them twice, giving you a total of twelve hours. You charge the charge case with its USB Type-C connection. The case charge time is 1.5 hours.

The case uses magnets to draw the buds in and align them with the electrical contacts. There are four spring-loaded, gold-plated contacts for each bud, plus another couple which look to be nickel plated. The case has a magnetically secured lid.

The case is finished in a very stylish tweedy material. It weighs 58.1 grams and measures 79mm wide, 45mm deep and 35mm thick. It can comfortably fit in the typical pocket if you don’t mind a bit of a lump.

The Sennheiser Momentum True Wireless buds are small and compact. They come with four different sizes of silicon tips, but there are no plastic/silicone “wings” or “fins” of the kind often provided to hold things in place. It turns out they’re not needed.

Once I’d put the largest size of tips on, I followed the instructions on how to put them in my ears. The shape of the earbuds’ bodies acted as though they were wings, sliding into the whorls of my outer ears, locking things into place. They remained very secure without any discomfort.

The left earbud weighs 6.4 grams, while the right one weighs 7.2 grams. I guess there’s a little something extra on the right side.

Inside each of the Sennheiser Momentum True Wireless buds is a tiny 7mm dynamic driver. I guess that’s how Sennheiser keeps things so small. At this point allow me to mention that size isn’t everything. Yes, for truly deep and powerful bass from loudspeakers you do need large drivers. But things are very different with headphones, and even more so with earbuds. The driver in a bud is directly coupling with your ear canals, exercising a far more direct control over what’s going on in there.

Sennheiser rates their frequency “range” at 5 hertz to 21,000 hertz. It says that they will produce a sound pressure level of a mighty 107dB for just 1mW of input, and that they produce less than 0.08% distortion at 94dB output (in both cases at 1,000 hertz).

The buds are IPX4 rated, which means they’re okay with a bit of splashing (that is, rain) and work-out sweat.

There are no obvious controls on the earbuds. But each bud has a tap-sensitive surface. By means of tapping once, twice or three times, or by tapping and holding you can do the following:

Sennheiser gets a lot of mileage out of two tap surfaces!

I found it took a little practice to get the correct spot of the surface for reliable tapping, but a little persistence paid off. Having volume controls on the buds themselves is a rare feature for true wireless models, and very welcome.

“Transparent Hearing” is a mode that pipes in sound from the outside, using the hands-free microphones. The point of this is to allow you to hear what’s going on around you without removing the buds. When you double tap to invoke this, it also pauses the music. But you can then restart the music while retaining the outside sound feed.

The Sennheiser Momentum True Wireless buds also seem to incorporate some kind of proximity sensor. When you take either one from your ear the music playback stops.

There was one operational area in which these earphones really stood out from the crowd: they were so very, very responsive. Normally when I hit play/pause with Bluetooth earphones, my phone keeps doing what it was doing for a second before responding. With these ones it was more like a quarter of a second.

Now that might seem a trivial point, but the fact is that for any number of reasons your phone might decide that whatever you’ve paused can be disconnected. So, when you hit play/pause again, nothing happens. But you don’t know for a second or more, then you press the button again in case it didn’t register, but you’re still not sure. Well, that’s how it is for me, anyway.

The almost instant feedback with these earphones was very welcome.

The connection was also very solid. There were no dropouts with my phone in my pocket, and I was able to wander up to 25 metres away from my phone while retaining an unbroken connection. Generally going through the electronic anti-theft gateways in department stores interferes with Bluetooth earphones. And it did with these, too, but not too badly.

Sennheiser has a new app. The sole product with which it works, so far is the Sennheiser Momentum True Wireless earphones. This has an EQ feature and also lets you switch the “Transparent Hearing” function. You can have that either pause the music, or just feed into the music.

The EQ function has a weird interface. You control it by dragging one single dot around on the app display. Yet it seems to work quite effectively.

The app also handles things like software updates and it shows you the individual charge status of each bud.

I’ve had cause to complain in the past about some Sennheiser earphones tendency towards excessive brightness. Well, there was none of that here. These earphones sounded brilliant. I loved them.

The tonal balance was extremely accurate. Many brands of earphones push the bass up a bit, presumably thinking that accords with modern tastes. The Sennheiser Momentum True Wireless buds kept it to the right level, perhaps diminishing a little with the really deep stuff. Nonetheless, the sub-40 hertz material was fully present.

But there was something about these earphones that went beyond mere balance. They delivered the kind of detail that one looks for – listens for, rather – with audiophile gear. Instruments, voices, everything had a kind of realistic presence that lifted the sound well beyond that delivered by any other earphones I’ve used. Yes, these are the best.

They may have been assisted by advanced codecs. I was using a Google Pixel 2 XL, and it confirmed that the Sennheiser Momentum True Wireless buds were using the aptX codec. Sennheiser says that they also support the AAC codec used by iPhones, plus aptX low latency.

There is one more feature that I’d like to see. At $499.95, you wouldn’t want to misplace a bud, so a Find My Bud app features would be very welcome. Such a thing has saved my bacon on at least one occasion. The site for the Sennheiser Momentum True Wireless buds is here.

Features
Value for money
Performance
Ease of use
Design
The best sounding buds
Beautiful design
No “find my buds” feature
4.6