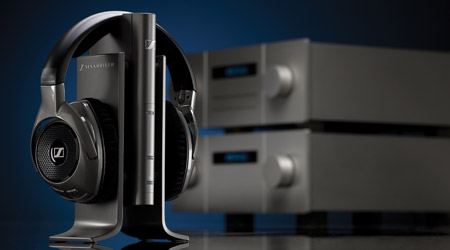 Sitting at the pinnacle of Sennheiser’s wireless headphone range, the RS 180 has everything you could ask for: audio quality, transmission clarity, range and response.

Perhaps the biggest difference between this and the cheaper RS 170 model are the open cans, which provide an airier, more natural audio experience (but also do less to isolate the listener from external sounds) and the automatic levelling control, which intelligently tries to normalise the audio volume in order to make speech more intelligible and less likely to be drowned out by the score. It also has the added benefit of making advertisements less annoying.

Like the RS 160 and RS 170, the RS 180 uses Kleer’s wireless transmission technology, and it is without question a vast step up from older FM radio transmitters. Although you can only link a maximum of four headsets to the one base station, each of those headsets will receive a very clear digital signal, free of RF noise and compression artefacts that deaden the sound. The Kleer technology technically delivers 2.37 megabits per second of bandwidth, which is enough to deliver uncompressed CD-resolution audio to the headsets (that is 16-bit, 44KHz) with headroom for error correction. To translate that into real-world speak, it’s like you’re connected to the audio source by wire.

The RS 180 certainly lived up to its billing when we tested it – at a range of 20m and through several walls the RS 180 delivered impressive audio, completely in sync with the onscreen images. Sennheiser claims that you can be up to 100m away and still receive clean audio.

The headphones themselves are also top-shelf. In addition to being both light and comfortable, they produced clean audio across the frequency spectrum and at both high and low volumes. There was some drop-away at very high frequencies, but you’re unlikely to ever encounter that in practice. The midranges were very nearly perfect, and the bass was strong enough without being overpowering.

We’re still not sold on the automatic levelling control, however. In theory it’s a good idea, since we’ve seen too many DVDs and listened to too many CDs with poor sound levelling, but we’re not sure of its efficacy. It definitely had some effect, but sometimes loud moments are meant to be loud.

The headphones can go for 24 hours between charges, and the base station doubles as both a transmitter and a charger. Hanging your headphones in it at the end of the evening will automatically recharge the NiMH batteries in the headphones.

A fantastic set of headphones all around, the open design of the RS 180 will be seen as a boon by some and a bane to others. The RS 170 model is probably better value overall, but if you much prefer open cans then the RS 180 is the go. Either way, you’ll get a set of wireless digital headphones and a base station that deliver extremely high-quality audio over the airwaves, without the pops and hisses that have plagued wireless headphones in the past. These are well worth the asking price.