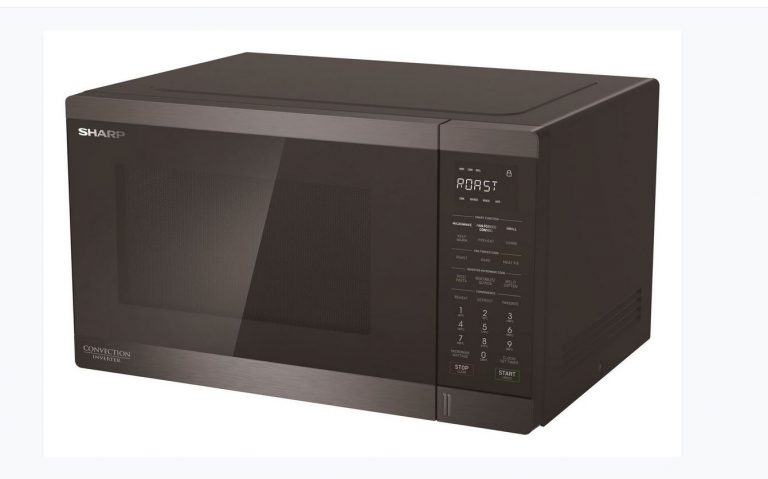 Sharp microwave was Australia’s largest selling in 2017 according to Hans De Jong, Head of Consumer Electronics at Sharp Australia.

“But regarding brand recognition, we are number two behind Panasonic. We aim to fix that with our new ‘Live Smart, Live Sharp’ mantra,” De Jong said.

De Jong has been with Sharp since the end of 2016 after a long career at Samsung in TV and AV. It is fair to say that while he admits he can’t cook he ‘knows his onions’ where microwaves are concerned.

“But for a few hundred dollars more you can get so much more including convection and grilling that turns a microwave into an oven replacement.”

“At present only about 5% of sales are in this category, and we think it is because people don’t understand that it is just a microwave with a fast fan-forced oven and a grill element. Why waste lots of time and money in pre-heating a full-size oven to make a pizza or grill some cheese? That is the extent of my cooking skills!” he admitted.

We spoke to our spy’s at JB Hi-Fi who confirmed De Jong’s suspicions. “We sell maybe one or two convection for every ten microwaves. Two things. People come looking for a microwave because it’s a typical add-on to an oven – quick reheat and veggies cook. Second, they are conditioned to spend that magic $200, and they want the largest capacity, highest power and best features for dollars and that currently comes from Sharp’s R350YW”.

Sharp demonstrated its 2018 range at a cooking demonstration of healthy, easy to prepare in under 10 minutes by wholefood blogger, Nadia Felsch. Recipes are here.

Now I pride myself on being a slightly better than average cook. I also bought one of the first consumer microwaves back in 1974 and admittedly have used Panasonic microwaves ever since. I mainly use it for defrosting, cooking vegetables, reheating drinks, popcorn, and my favourite – 60-second bacon and two-minute scrambled eggs. That may change!

I did not know you could do some interesting things Felsch did with a microwave, courtesy of Sharp ‘Smarts’. Sharp’s larger seven-segment LCD enables many of these.

A humidity sensor allows you to put fresh or frozen vegetables in and it calculates the cooking time. No more guestimates and nuked veggies.

Four pre-sets allow you to select your most used settings. So, if you want to do 2-minute scrambled eggs and stir half way it tells you what to do.

It can discriminate between white and whole grain rice or pasta that need different cooking times.

There are also a range of smart recipes that will prompt you along the way. The bottom line is that Sharp is proactive to help you get more from your microwave.

I was most impressed with her cooking pasta in eight minutes. Normally you would have to boil the water first (10 minutes) and cook the pasta for 11-12 minutes.

If you are like me, the kidults have long since flown the nest. Cooking is now for my wife and I, and we don’t need four burner hobs and huge ovens. In fact, most nights we have salad or veggies and some protein (meat) or carbs (pasta). Long gone are the days I could roast some lamb in the BBQ – our minuscule 200g portions are simply incinerated.

I think that a microwave/convection/grill oven may just do the trick. I will be reviewing this over the coming weeks and will let you know how it goes on mini roasts, pizza (what is life without cheese?), and trying out as many of the 28 Australian recipes programmed into it.

Sharp previewed its new slide out-draw microwave. It is a built-in design for under benchtops. It is not in Australia yet, but I want one!