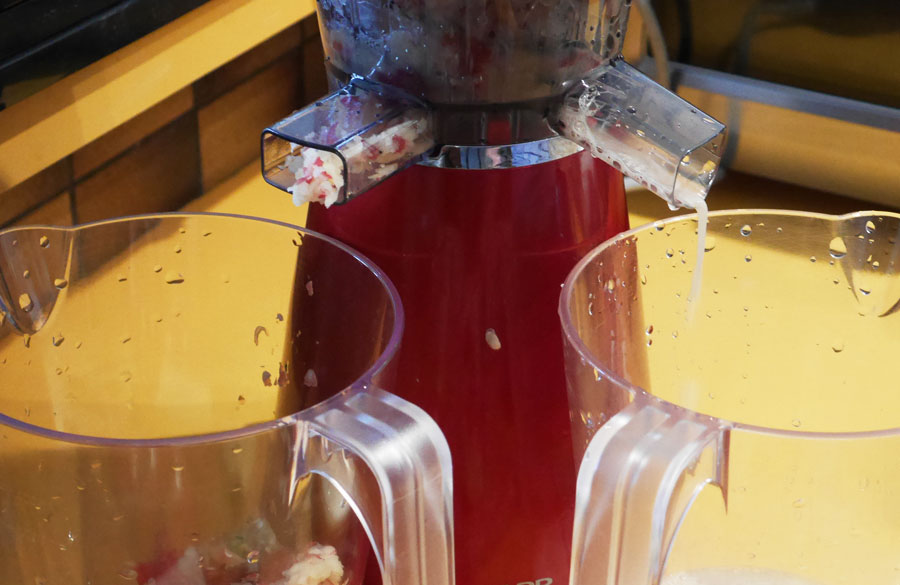 Slow juicing seems to be the in thing at the moment, and given how it preserves minerals and takes more juice out of the fruit, we get why. Sharp’s slow juicer aims to deliver liquid fruit in spades, while making it easy to clean. Does it succeed?

Built to be easy to clean and maintain, the Sharp EJ-CP10BJ doesn’t have a lot to it, making it easy to store and deal with.

There are three four main parts to this unit, consisting of the motor block at the bottom, the container (also known as the drum), the squeezing screw, and the topper lid.

The container that holds everything together has two plastic chutes built into it, with the left one reserved for fibre, while the right one will see juice expelled.

Inside the container is the one main operating part, a heavy black juicing screw with a metal mesh filter below. This connects to the container, which sits on the main body of the juicer and provides the motor to cause the squeeze screw to turn, pushing the fruit against the container it sits in.

Sharp’s slow juicer won’t operate without the plastic locking top engaged, which provides the main chute for throwing fruit and veggies into the chamber. A plastic chunk pusher is provided as well, shaped to fit in this specific slot.

Two jugs are provided in the box, which is useful given the two slots, making it easy to collect both the fibre and the juice, and then pour it either into the trash or into a glass for consuming, respectively.

Only one plug is needed to operate the appliance, though the switch has three settings, consisting of on, off, and reverse.

A brush is also provided in the box to help clean the filter of the juicer.

Arriving just in time to take advantage of the whole slow juicing movement is Sharp’s EJCP10BJ, a product that lacks a snazzy name, but makes up for it with a compact size and simple operation to take fruit chunks and turn them into a simple beverage.

For those not in the know, slow juicing is also known as “pressure juicing,” and rather than the conventional slice-and-dice metal blade juicer that we’ve all seen in shops for years, relies on a big screw to push the fibre against the container wall to break the fruit down into juice.

This process, unlike the traditional blade-based one which cuts the fibre up like a blender can, means the fruit and vegetable fibre is pushed to within an inch of its life, releasing as much juice and minerals as possible, and losing less than the conventional juicing method.

The Sharp EJ-CP10BJ accomplishes this with a container drum sitting atop a motorised block, which keeps the drum in place using moulded plastic grips and a spine. Setting it up is easy, and with only a few parts, you merely load the bits on piece by piece, before locking the plastic chute top in place.

Plug it in after this, turn it on, and you’re ready to go.

Like most juicers, a plastic chute is provided on the locking mechanism, providing a big enough gap to pass fruit into the juicer, and not your fingers. Simply drop the fruit down here, and the juicing compartment will take care of everything, forcing the fruit through the ridges of the squeezing screw, before it’s small enough to be pushed through the mesh filter at the bottom of the screw.

When this happens, juice from the fruit is pushed out on one of the two chutes (the right one), while fibre is expelled from the remaining chute (the left one).

Fibre pushed from the EJ-CP10BJ is generally dry, though not quite to the extent that the grandfather of machines — the Oscar Neo Ultem Tough — makes possible.

There is still some liquid in the residual pulp, enough so that you could use the remaining fibre in recipes, which is a stark contrast to the mulch the Ultem Tough leaves behind which is virtually inedible thanks to the total lack of moisture left behind from that juicer.

Thankfully, another difference between the two models is the speed, and the Sharp doesn’t waste time in taking your fruit from its solid form into something far more suitable for a cup.

It would takes between five and ten seconds for most fruit and vegetable fibre to be passed from the top of the container and past the squeezing screw into the juice and fibre jugs below.

Some particularly thin vegetables may take a little bit more time, and we found leafy herbs like basil and even kale could require something else to get them through, so if you’re stuck in this case, try pushing through an apple chunk, as that seems to make it easy for the flatter ingredients to resolve.

That said, even the kale could be juiced, and while this journalist isn’t too fond of the flavour, the residue expelled from the left side was reasonably dry, though, once again, wasn’t the most moisture-free pulp we’ve seen from a slow juicer in the past.

As far as cleaning goes, Sharp’s slow juicer is tremendously easy to remove fibre from, with really only two sections to worry about: the container with its juice and fibre release slots, and the juicing screw with the filter attached.

This makes it a cinch to clean, which is better than either of the two slow juicers that have passed through GadgetGuy in the past, with less bits to clean across the board.

Filter combs can be a hassle, that said, but an included brush means you merely need to scrub out some of the remaining stuck food under a tap or soapy water.

Overall, we’re fans of the compact size, because unlike some of the other bulky pressure juicers out there, the EJ-CP10BJ occupies nearly the same space as a small blender, which will play nicely in most kitchens. Less parts also means less cleaning, and that’s positive too.

But like other slow juicers, the tech isn’t cheap, and Sharp’s recommended retail price of $499 does make it a steep ask compared to some of the models coming in under $300 from other brands.

The first slow juicer from the company, Sharp’s slow juicer does a commendable job in a space much smaller than at least one other pressure juicer we’ve seen, and if you lack the space in your kitchen for a big juicer and you want something easy to clean up, the Sharp EJ-CP10BJ is ideal for you.

Overall
Features
Value for money
Performance
Ease of Use
Design
Reader Rating0 Votes
Efficient; Stylish and compact; Easy to clean;
Doesn’t pulp fruit out as well as some of the competitors; A little on the expensive side;
4.5