Shrek the Halls on DVD 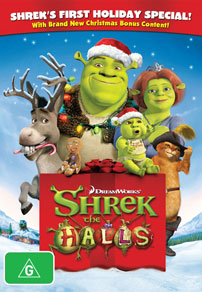 Just when Shrek thought he could finally sit back, relax and enjoy his happily ever after with his new family, the most joyous of all holidays arrives. It’s Christmas Eve, and everyone is filled with holiday cheer, except for Shrek. He isn’t exactly the picture of yuletide joy, but for the sake of Fiona and the kids, he tries to get into the spirit of things as only an ogre can. Unfortunately, everyone seems to have their own ideas about what Christmas is all about, so when Donkey, Puss In Boots, Gingy and the whole gang try to join in on the fun, Shrek’s plans for a cozy family celebration end up spiraling into one truly unforgettable Christmas.

Featuring the voices of Mike Myers, Eddie Murphy, Cameron Diaz and Antonio Banderas, Shrek the Halls lets fans join in on the fun as Shrek celebrates his first Christmas with his new family and learns some important lessons about the spirit of the season.