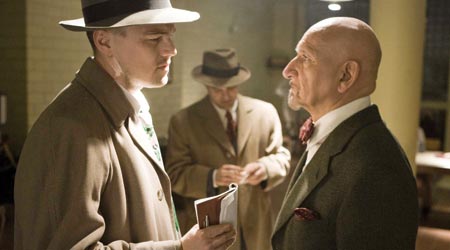 Scorsese’s latest work, Shutter Island, gets off to slow start, but gathers pace towards a brilliant finale. Sir Ben Kingsley lends the film an appropriate air of mystery and inscrutability, and the drama, while seemingly continuing for centuries (with a running time of almost two-and-a-half hours), eventually engages the viewer enough to want to find out what on earth is going on at this bizarre, creepy asylum.

Shutter Island’s plot surprises, but it’s in that genre of movie that makes a second viewing almost pointless. DiCaprio, in the lead role as an investigating US Marshall, does a fine job of portraying a haunted man on the brink of collapse himself, with a supporting cast that seems to focus the intensity on his growing awareness.

We get tired of pointing this out, but the movie houses are letting all the early adopters down by failing to deliver on their promises with Blu-ray format. True to form, this disc doesn’t have any special features that don’t also appear on the DVD version of the film. And there are only two; paltry by any standards. Nevertheless, one of them is a ‘featurette’ (presumably a feature that just isn’t grown up enough to earn the non-diminutive title) called ‘Into the Lighthouse’.

The featurette is lightweight in its revelations but nonetheless reasonably interesting, with the actors and Dr James Gilligan, real-life psychiatrist and consultant, discussing how closely the film adheres to real-life psychiatric practice from the 1950s. These were the days when jamming an ice pick into a patient’s eye was considered the best way of ‘curing’ mental illness, otherwise known as a ‘trans-orbital lobotomy’, removing big chunks of the brain in the process.

The other huge bonus from Paramount is your bog-standard ‘making of’ doc, but you have to be quite the fan to sit that one out.