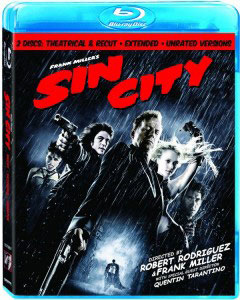 I first saw a side-by-side comparison of a DVD and a Blu-ray movie back in 2007. On that day I also saw an animated movie play. Blu-ray really makes animated movies sing – the HD picture stunned me back then, and animated movies continue, I think, to be the most breathtaking high definition video experience.

Strictly speaking Sin City is not an animated movie, it uses real actors in front of digital backgrounds. The movie is essentially in black and white, but colour is used on occasion – a character’s eyes, cars, blood, a dress… It seems odd to say that a black-and-white movie is a high definition tour de force, but this is a stunning looking movie, full stop. It is as good a selling point for the Blu-ray format as any movie I’ve seen.

These moviemaking techniques serve to make this a brilliant film version of the source material, the acclaimed Frank Miller graphic novel of the same name. In a real nod to the importance of Miller’s vision, he is a co-writer, producer and director, along with Robert Rodriguez. Also briefly along for the directorial ride is Quentin Tarantino, who directs a short sequence of one of the stories.

Stories? Yes, there are four stories in this film, “That Yellow Bastard”, “The Customer Is Always Right”, “The Hard Goodbye” and “The Big Fat Kill”, taken from the original 13 stories in Miller’s graphic novel. Basin City, aka ‘Sin City’, is not a place of light and apparent goodness. It’s a noirish nightmare of a place, corrupt, violent and dangerous, though as is often the case in ‘noir’, there is goodness in some characters beneath their violent exterior. And there is violence in this film, be warned, but it’s a ‘cartoonish’ violence, the highly stylised visuals of the movie, for me, lightened the impact of the violence.

I loved this when I saw it at the cinema, and I loved watching it on Blu-ray – check out the interesting collection of extras available on the disc(s). I didn’t watch this film using a HD sound system, but if you do good luck to you, the specs look pretty good. And if you have a D-BOX system, even better luck to you. The movie is enabled with the D-BOX motion code. D-BOX uses an actuator system to literally shake your seat around according to timing codes from a hardware module hooked up to your DVD or high definition optical disc player. Read more about D-BOX.

“The Long Take” – a full roll (14 minutes) of a scene directed by Quentin Tarantino, including interaction between the actors and director.

“10 Minute Cooking School” – Robert Rodriguez shows how to cook Breakfast Tacos – a dish that fuelled him during the late night and early morning making “Sin City” – well, all his films really.