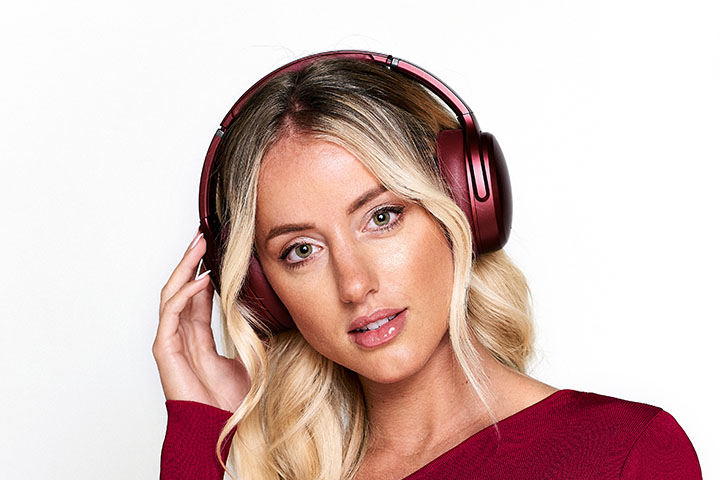 Well, that’s bold. Skullcandy – the best-ever name for a headphone company! – has priced the Skullcandy Crusher ANC headphones at almost $600. That’s fifty percent higher than some of the market-defining models from the likes of Sony. So, how do they stack up? Especially since Skullcandy says, “Behold the most immersive headphones ever made”.

The Skullcandy Crusher ANC headphones come in two colours – black (“Fearless Black”) and a slightly dusty crimson (“Deep Red”). They include active noise cancellation and are over-ear models, which tends to give better noise isolation. They are provided with a nice hard carry case. The earcups turn sideways to allow flat packing, so they’re excellent for travel.

The right earbud has good old-fashioned buttons for play/pause and volume up and down. The left earcup carries the power button which, when manipulated in various ways, also doubles as the control for active noise cancellation and pairing.

Underneath that button is a slide control for something called “Adjustable Sensory Bass”.  It’s definitely sensory, with what seems to be an oversized driver inside the headphones physically shaking them at an infrasonic frequency. Because it’s adjustable, you can have this anywhere from off to a rather high level.

Charging is via USB Type-C. The headphones are rated at 24 hours of operation on a charge. I’d guess that heavy use of the Sensory Bass would shorten that. It also offers a ten-minute quick charge for three additional hours of operation.

The headphones gripped my head fairly tightly, with my right ear in particular becoming a little weary after a couple of hours.

The headphones employ 40mm drivers, with amplifiers rated at up to 9.1dBm output. That converts to around 8 milliwatts. According to Skullcandy, they weigh a remarkably precise 308.66 grams. My scales aren’t quite as precise of that. They reported 308.6 grams.

The headphones use Bluetooth 5.0 and come with a regular 3.5mm cable for analogue connection. That could be for when the battery is flat, or when you’re using them with the in-flight entertainment system on a plane.

I installed the Skullcandy app from the Play Store on my Android phone. It has a pretty appalling rating of 1.7/5.0 with some 422 votes, although most of the negative reviews seem to be from people complaining that the app doesn’t work with other Skullcandy headphones or buds. Fact is, I only bothered looking at the rating and reviews when I simply could not get the app to connect to the headphones. Don’t get me wrong, the phone – it’s running Android 10 – connected fine. But despite the phone being connected by Bluetooth, the app couldn’t find it. Some of the reviews on the Play Store mentioned a similar problem. I saw no response from Skullcandy to those reviews. The last app update was in October 2019.

So I paired the headphones with an iPhone instead and installed the iOS version of the app. It has a rating of just 1.4/5.0, although that was with only seven votes. The only three written reviews all complain that the app would not open. But it opened for me and actually did connect to the Skullcandy Crusher ANC headphones. I’m using an iPhone 6 with iOS 12. That rating was accessing the App Store via my iPhone’s app. But via the web the App store reports 2.9/5.0 with 68 ratings. Go figure.

Should you personalise the Skullcandy Crusher ANC headphones?

So what did it do? The app only has one important feature: it can “optimise” the sound for your personal hearing profile. It does this by playing a series of test tones at low volumes. You listen and indicate whether or not you can hear them. The app then develops an EQ profile and loads that into the headphones. You can switch it on or off in the app. When switched on, it remains loaded even if you connect the headphones to a different device.

I’ve used similar personalisation features before. They “work”, in the sense that the provide a different kind of sound for different people. It’s based on how well they can hear.

But the whole concept is fundamentally misconceived. The ideal headphone sound is as close as possible to what you hear in real life. What you hear. Not some idealised version of you. If you go to a rock concert or an orchestral performance, you are going to hear the sound as modified by all the flaws of your hearing – and unless you’re very young, you’re going to have plenty. If you adjust out those flaws when listening using headphones, you’re going to be getting a very different sound.

That’s certainly what I got. With the sound “optimised”, it was harsh, excessively bright and very unrealistic.

Play with the feature if you like. But don’t expect anything nice from it.

A far more useful feature in the app would have been a user-adjustable EQ function. Sadly, it’s not there.

The Skullcandy Crusher ANC headphones also have built in support for the Tile tracking system, so you ought to be able to find misplaced headphones.

The Skullcandy Crusher ANC headphones connected to my Android phone with the aptX HD codec, which is one of the highest quality ones out there. I have no idea what it used with the iPhone because I couldn’t find any mention of codecs. AAC maybe, or SBC. Who knows?

Why worry about this? Well, much to my surprise, the Skullcandy Crusher ANC headphones were very different beasts depending on whether they were connected to the Android phone or the iPhone. Perhaps it had nothing to do with codec. I necessarily used different apps on the two phones to feed high quality FLAC-encoded audio to the headphones. Maybe the apps did something different, although that hasn’t been my experience.

Anyway, despite the lack of aptX HD, the sound was simply better – more accurate, more tonally balanced – with the iPhone than it was with the Android phone. And in an unusual way. For the reasons laid out in the previous section, I did all my critical listening with the so-called optimisation switched off.

With the Android phone the midrange was noticeably recessed, giving a vaguely disembodied sound. Yet that wasn’t the case with the iPhone. That was quite surprising. Indeed, with the iPhone the sound was fairly well-balanced, albeit with a somewhat prominent, although clean, bass.

Voices on podcasts were clear and clean and there was less of a sense of the missing midrange with them. With hands-free telephone operation, the Skullcandy Crusher ANC headphones were first class. I had a long conversation with someone fairly picky about the quality of the connection, and she was more than satisfied.

Then came the fun stuff. I plugged the Skullcandy Crusher ANC headphones into an iPad with the supplied cable – it has a button for play/pause – and listened to them that way. The sound was closer to the iOS Bluetooth sound in balance. I could have ANC on or off this way. And I could switch off the power entirely and use them as passive headphones. I think I preferred the sound quality most of all in this mode. The balance was excellent, the sound lively and dynamic and open. This was the way the headphones ought to sound.

But, of course, that’s not the way they’ll generally be used.

Because all features, including active noise reduction, are usable with the wired connection, the headphones are highly practical for international flights. Except no two-prong adaptor is included so you’ll need to pick one of those up separately.

Sliding up the Sensory Bass control on the Skullcandy Crusher ANC headphones both boosted audible bass and seemed to kick in some kind of vibrating mechanism which shook the headphones, quite substantially when it was turned up high. I think this must be a separate mechanism to the main driver. It’s hard to see how the regular driver would have sufficient mass to create the level of vibration these headphones can deliver.

My judgement? Don’t. The regular bass needs no enhancement and the vibration effect is quite disconcerting. It didn’t seem to be very closely in time with the music, as though significantly delayed. But had it been in time, well, it would still just be a gimmick that adds nothing good to the music experience.

I did my usual noise cancellation test: I wound up the volume of a video recording I took on the back seat of a turbo prop plane so that it was playing at 100dB SPL C-weighted on my (very good) computer speakers. The noise reduction was very effective, reducing this deafening level down to still audible, but hardly troubling levels across a wide frequency range. The voice prompts could only barely be heard with the noise cancellation off, and certainly not understood. With it on they were clear.

Music, likewise could be enjoyed at a moderate level with noise cancellation switched on. The noise reduction isn’t quite as aggressive as that from certain big brands, But on the other hand, the Skullcandy Crusher ANC headphones produced no motion artefacts – noises generated by the ANC when I was walking.

I wouldn’t hesitate to use these for air travel.

The one negative on the ANC was that in quieter environments having it switched on produced an audible hiss through the headphones.

One last practical issue: the connection was good for a range of just on ten metres. Beyond that there were dropouts with certain head orientations.

The Skullcandy Crusher ANC headphones are stylish and practical, with effective active noise reduction. Since I had problems with the sound as delivered by my Android phone, may I suggest that you audition them yourself with your own phone.