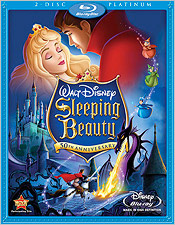 To celebrate the 50th Anniversary of Sleeping Beauty, Walt Disney Studios Home Entertainment is releasing one of its most celebrated and loved Platinum Editions from the Disney Vault on both DVD and Blu-ray format from October 15, 2008.

The first Disney classic ever to be released to high definition 2-disc Blu-ray, Sleeping Beauty 50th Anniversary Platinum Edition on Blu-ray also includes a bonus DVD disc of the title.

A family favourite, Sleeping Beauty tells the tale of Princess Aurora who is blessed with the gifts of beauty and song by the good fairies of the kingdom – Flora, Fauna and Merryweather. Betrothed at birth to Prince Phillip, the son of a neighbouring king, Princess Aurora is wickedly cursed to die by the prick of a spinning wheel spindle before her 16th birthday by the evil fairy, Maleficent.

Determined to prevent this catastrophe, the good fairies hide the princess in a secluded cottage in the forest where Aurora blossoms into a lovely young woman unaware of her real name and birthright. Princess Aurora, now called Briar Rose, soon meets and falls in love with Prince Phillip who she believes is a peasant boy but in actual fact is her betrothed.

When the good fairies reveal Princess Aurora’s birthright to her, she is overcome with sadness for she believes she must sacrifice her true love, the peasant boy, to marry a prince who she believes she has never met. On the brink of discovering that the two are one and the same, Aurora is stricken by Maleficent’s terrible curse. All seems lost but for one glimmer of hope – only true love’s kiss can wake this sleeping beauty from an eternal slumber.

What’s on the discs?

One of Disney’s greatest love stories, collect your copy of Sleeping Beauty Platinum Edition on available from all good DVD and Blu-ray retailers from October 15.The DVD edition has an RRP of $39.95, while the Blu-ray is $49.95.