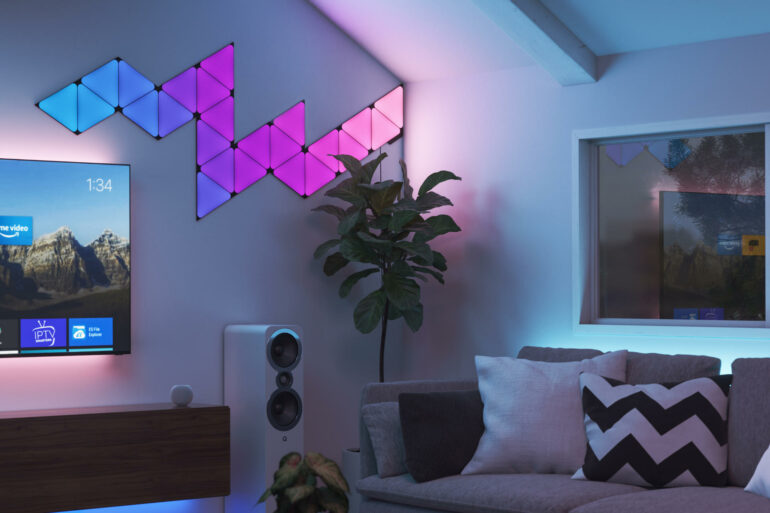 Originating in Toronto, Canada, Nanoleaf launched into popularity following its Kickstarter success in 2012 to become one of the more recognisable brands in the smart light space. Highly modular and customisable, the brand’s range of lighting panels is often seen in the homes of tech enthusiasts, particularly in the background of content creators’ streams and videos.

Headlining the anniversary promotion are the Ultra Black Nanoleaf Panels, a new limited edition product featuring triangular panels coated in a 360-degree black finish combined with vibrant RGB lighting. With an all-black design – including the mounting plates and controller – they’re designed to function as an art installation when switched off, and a sleek dynamic light array when in use. It’s currently available via the Nanoleaf website in either a nine-panel Smarter Kit for $369.99 or a three-panel Expansion Pack for $129.99.

Alongside the limited edition black panels, Nanoleaf has several other promotions running for the next few days. Many products from the core range are discounted for the anniversary celebrations, plus there are swag and mystery boxes filled with Nanoleaf merch for the hardcore enthusiasts. To thank fans for their support over the past decade, Nanoleaf will also gift 100 people around the world an exclusive goodie box made for the anniversary.

Beyond the 10th anniversary, Nanoleaf announced it is hosting a live charity stream on Twitch in August alongside other creators to raise funds for AbleGamers. AbleGamers is a not-for-profit organisation that works to improve the quality of life for people with disabilities through gaming.

There are only a few days left before the Nanoleaf 10th anniversary promotion concludes, which you can check out here. They’re popular for good reason: the lights are stylish, simple to install and play nicely with pre-existing smart home setups.