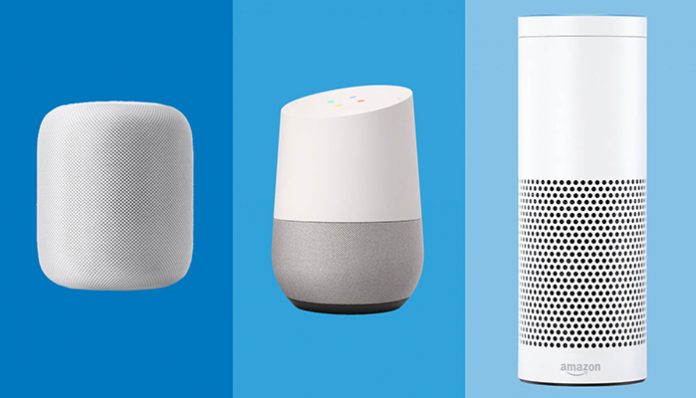 The global smart speaker market has grown by 187% year-on-year. But reports show that they could be more of a curiosity than a truly useful device.

Smart speakers, particularly the Amazon Echo Dot and Google Home Mini (both selling for under A$60) are flying out the door as consumers test the waters for a voice assistant.

Google Assistant retained its first-place position from the previous quarter, with 5.4 million shipments of its OK Google-branded and third-party speakers. Its growth was a spectacular 449%. This is largely due to the proliferation of new Google Assistant speakers – there are more than ten in the Australian market at present. GadgetGuy’s shootout is here.

Amazon shipped 4.1 million Alexa based devices in the quarter down 14%.

This shows the change in attitude from a few months ago when Alexa led three-to-one over OK Google in the US.

Amazon and Google have both gone into Europe and Asia. But, the U.S. still accounts for 68% of Alexa’s shipments and 58% of Google’s. It’s now a two-horse race with Google well ahead, especially in Australia where it has led for several quarters.

In China, Alibaba and Xiaomi ranked third and fourth overall, shipping 3.0 million and 2.0 million smart speakers respectively. This is because Google’s services are not allowed, and Amazon has no substantive retail presence.

As the worldwide smart speaker market rapidly evolves, use cases for smart speakers are extending beyond just the smart home. But they are not enough to really drive growth.

Futuresource found that the top two uses were listening to music (84%) and asking questions (52%). The reality of controlling smart home devices had dived.

Amazon has begun integrating Alexa skills into verticals, such as hotels, retail, hospitals and other business establishments.

The Google camp is experimenting with new form factors. The Lenovo Smart Display (US$200) and JBL Link View (US$250) add video calling and a graphic interface to OK Google. Given the relatively low price, these are winners.

JBL’s Link delivers both Android TV and OK Google to any TV. It too is set to be a winner. Set-top boxes, robots, smart glasses, refrigerators, tablets, and cars are coming too.

And as some 85% of the world uses Android devices, there is a push to make voice an easier interface.

In short, OK Google can be on almost any device with an ARM processor and internet connectivity.

We will soon enter an era where smart assistants will require a new form of hardware medium more effective than speakers to advance further.

Despite all the promises both Alexa and Google Assistant are failing badly in the smart home integration race. In part, it is because these upper-level voice assistants lack the necessary sophistication to control IoT devices. Here LG ThinQ, Samsung’s Smart Home (Bixby), and Apple’s Home Kit have the in-depth knowledge to make IoT work.

But real use cases are still a grand vision. Vision without execution is a hallucination