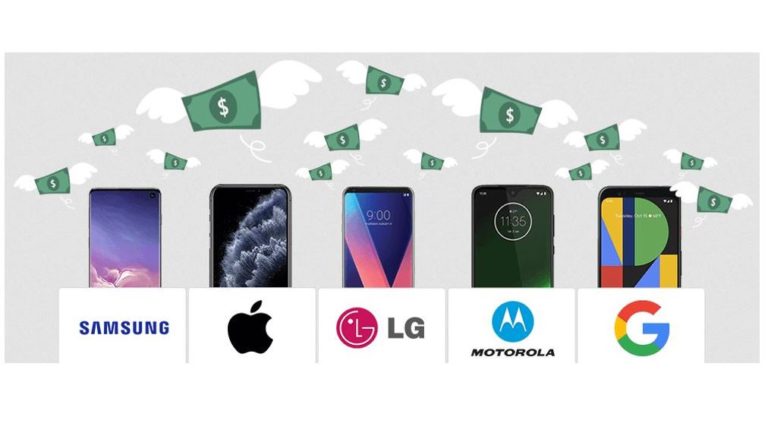 US-based BankMyCell, a premiere phone trade-in and recycler has released its report on over 300 models of smartphones that retain value and those that do not.

The research is from the US – an Apple homeland stronghold – so don’t be surprised that Apple smartphones retain value better. BUT…

We see a definite reversal of that trend as the PR impact of #batterygate takes hold (Apple was convicted of slowing iPhone 6/7 etc. without user consent) and it loses its shine over actively opposing the ‘right to repair’ movement.

Indeed when GadgetGuy visited Alegre, the trade-in and refurbishment facility in Sydney used by Boost Mobile, we got the same story from CEO Russell Lorne.

Stick to Apple and Samsung and trade-in or up every two years.

Phones depreciate at about 3% a month, so after 36-months they are worthless. At that time at best, you will get is a token value. Most gift it to a relative, try to sell second hand or put it in the top drawer.

The full report is here, but we remind you these are US findings where Apple is the norm.

At year four, both Android and iOS devices are worth almost nothing as a trade-in. In fact, the fastest depreciating phone after year two is the Apple iPhone 7 circa 2016.

The bottom line – don’t expect more than half value at two years.

In Australia, this period is possibly shorter as the super profits made by Telcos leasing phones (tax-deductible and where you had to hand it back at the end of the lease) have dried up. Now Telco’s offer interest-free monthly payments to cover the handset cost and do not cross-subsidise the handset from the data plan. it was all smoke and mirrors anyway.

Apple has also been propping up second-hand values via its grossly inflated trade-in program that recyclers say is not sustainable. But if Apple trade-in prices drop then, it cannibalises its new and even more expensive market. As long as it sells a new Apple to an existing Apple user, the walled garden works.

But as BankMyCell discovered last year swap from iOS to Android is rapidly escalating. It found that Android loyalty was now at 92% outstripping iOS loyalty at 70.8% (down from 89% in 2018).

It surmised that Apple users were basically loyal to the brand and ecosystem, having invested a lot in its proprietary apps and iTunes. But with the substantial price increases and even greater lock-in, Apple is fast losing its gloss.

GadgetGuy’s take – there is no such thing as smartphones that retain value. Take trade-in values with a grain of salt

Something is worth what people will pay for it.

Sell a car to a dealer, it offers the lowest price as it has to refurbish, warrant, and market it.

Sell a car to a private buyer the value is determined by what the dealer advertises similar models for. The prospective private buyer will try to drive a bargain as well.

If you trade-in a car on a new model, the dealer offers an attractive price by applying the discount on the new car to the trade. There is no such thing as a free lunch – it is either a better trade-in value or discounted new price – it’s the swap-over amount that counts.

And that is precisely what is happening with smartphones.

Apple offers an artificially high trade-in price that determines the markets second-hand value. It is effectively applying a discount to its new phone.

Samsung has started doing the same, but its pricing not as aggressive, so its second-hand value suffers.

And the bottom line – no phone has any value after 3-4 years, especially as the battery won’t hold a charge.