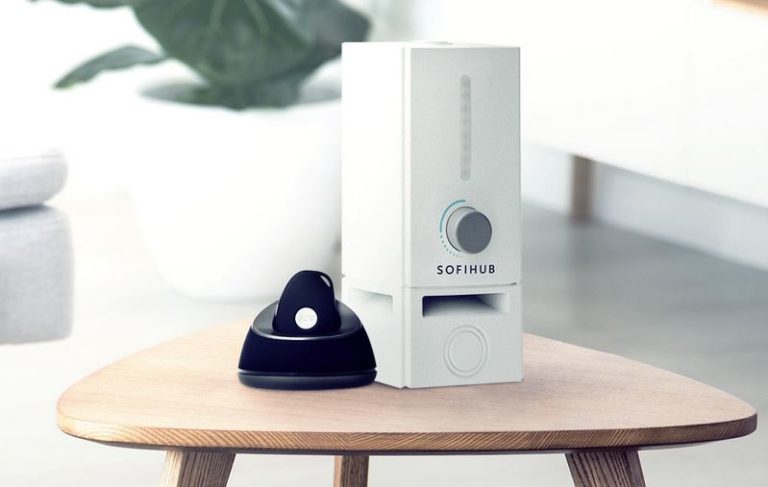 To understand Sofihub, you need to understand a little about its smarts. Those include eight PIR (Passive infrared) sensors placed around the home connected to a smart base station which can initiate several pre-programmed actions.

Sensor placement is the key to Sofihub’s effectiveness. The sensors are all labeled to show the best placement.

The sensors track your movement – or lack thereof – around your home. It is for single occupancy.

The sensors default is 360° motion, but you can fit a pet cover (180°) or a transit cover (think door sensor/tripwire).

If you go to the toilet and don’t come out in a programmed time, Sofihub will assume you have an issue and attempt to get some action. Similarly, if you go to bed, you should trip the sensor as you exit the bedroom later. While it is not a fall detector, it can detect a lack of movement.

Let’s say that you spend the majority of time in your favourite recliner chair in the lounge room. That is where the Sofihub should be – near enough to be able to hear it and press the white ‘I am OK’ button on top.

But the real power lies in the AI portal that you/the carer customises to the resident.

The portal also develops a timeline of activities that can help to define the messages. The carer/s access the portal via a browser and the Sofihub website – it is not limited to access from an app.

If there is an unanswered alert

Being 4G (not internet-based), it can call a carer/s and play a pre-recorded message.

If you cannot afford the upfront payment, you can elect to purchase on 12/24/36 month plans.

While there are alternatives like personal alarms (or the Sofihub Beacon) including setting up Wi-Fi motion detectors and Google Assistant, this offers plug and play simplicity. Although you could set up both and have an independent camera and motion detector (requires internet).

But Sofihub does not rely on the vagaries of the internet. That is at least a $60 per month cost in its own right.

It has an HDMI Port on the rear that, to a techie like me, means it should be connectable to a screen or soundbar(not tested and no mention of the ports use anywhere). I suspect a model with remote cameras would be ideal some (privacy issues aside), and a speakerphone would be a welcome addition.

We won’t rate it as we really can’t test it fully, but it appears very well made and conceived. And if it can help people to remain in their own home for longer, then it is worth every dollar.