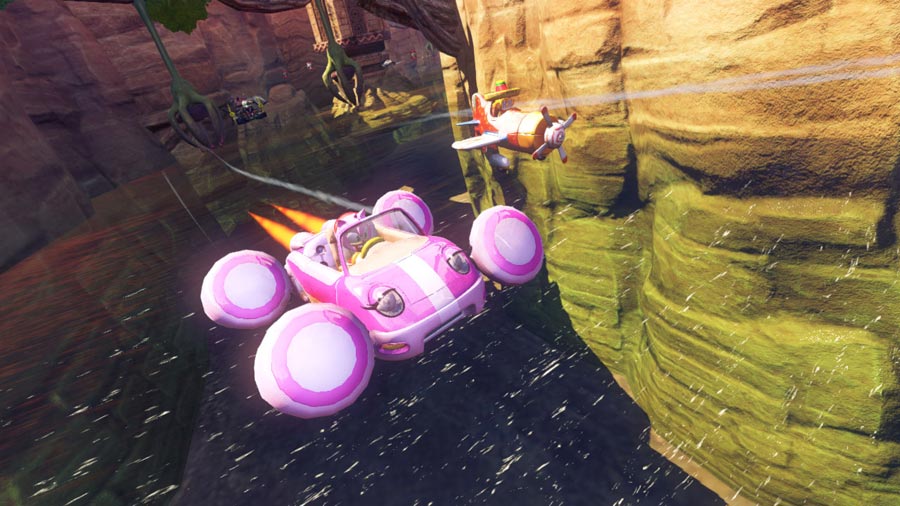 It’s the second time around for this kart racing game and Sega has certainly made excellent use of its intellectual property, marshalling its ‘mascots’ into line to present an impressive and nostalgic roll call of 20 playable characters so you can play as Sonic, Tails or Knuckles if you like, but there’s also a decent roster of others like Beat from Jet Set Radio, Amigo from Samba de Amigo, Nights and Reala from Nights into Dreams and the leggy Ulala of Space Channel 5 fame. These unlock and become available as you progress through the game.

During races, vehicles all transform, from their kart-based defaults to a sea-going version when they hit water sections or sprouting wings to take to the air. This isn’t defined by the actual track but happens dynamically during races at predetermined points. Trying the races on a higher difficulty level will give you more medals, which in turn unlock further events.

Some of the power ups are great – the ‘all-star’ booster that changes your ride into an all-conquering super machine is a blast, but beyond the more obvious ‘boost’ abilitiy the others are not all that inuitive so it’s hard to predict, initially, what they’ll actually do when you trigger them. Balance is good, however, and it’s often possible to dodge attacks from others if you have your wits about you.

Drifting is an essential skill to master in this game, as it awards you with extra time to get complete the more challenging sections and, visually, belongs to the exagerrated ‘Outrun’ stable of racers as you turn 90 degrees sideways and earn boost as you go.

Kart racing games often benefit from playing against humans rather than the supercharged AI, so Sonic & All-Stars Racing Transformed offers split-screen multiplayer and online play in races and ‘arena’ battle-style mashups. You’re less likely to get frustrated in these modes, as others tend to make the same kind of mistakes that you do.

Handling in general is fine for a kart racer and is probably a match for the king of that particular crop, Mario Kart, although the boats don’t convey the same sense of speed and the route indicators in the flying sections can be confusing.

Non-player racer AI can be frustrating, as you dominate races only to find someone come out of nowhere and pip you to the post to relegate you to second, but this kind of ‘elastic AI’ often features in arcade racing games.

Like other kart games, you don’t win by driving well, either, but by some arcane mix of power-up usage, drifting and sheer luck. This, more than anything else, damages the long-term playability of the game, detracting from all the good work done in the fun and imaginative level design.

Certainly the Sega fanboys will enjoy all the references to classic games, hyperactive announcer, upbeat arcade-cabinet music and the imaginative track design that borrows from the company’s long-standing franchises and younger players will delight in the bright, light-hearted racing action, even if some challenges can be a little severe.

Those less enamoured with all things Sega might well feel that the publisher has been trading on past glories for far too long now and hanker for Sega to break the cycle of rehashing juvenile arcade games and make something that’s, well, actually new.