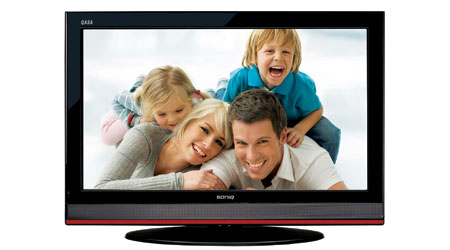 With a 117cm diagonal for its full high definition LCD panel, this Soniq TV still managed to come in under a thousand dollars.

Not surprisingly, it comes with some significant limitations, but it also has a couple of rather impressive aspects of performance.
The main limitation was a complete lack of support for 1080p24, the natural and best format for Blu-ray. I used a Blu-ray player capable of forcing this output, regardless of the information the TV was communicating back to it via the HDMI cable, and the result was the bottom half of the screen entirely covered in static-like lines.
Consequently all Blu-ray viewing was at 1080p60, which made much of the action rather jerky. This was all the more apparent because the screen was so large.
PAL DVDs and especially SDTV from the built-in digital TV tuner failed to impress initially, thanks to a kind of speckledy noise over much of the finer detail. But a bit of investigation revealed that the ‘Sharpness’ control was by default set way, way to high. It was on 4 out of 7. Turning it down to its proper place at 0 produced a very attractive picture. Especially as the automatic picture processing – deinterlacing and scaling – was significantly better than the other two very low cost TVs. I was quite happy to run my DVDs into the TV with the output set to standard interlaced video.
The TV features three HDMI inputs, providing some flexibility for connections, but lacks any easily accessible AV inputs. It will deliver digital audio from its internal tuner via an optical output. The internal speakers were adequate, but the review sample produced an irritating low-level buzz through them at all times except when the volume was set to zero. This was clearly a malfunction of the review unit.
Overall
Features
Value for money
Performance
Ease of Use
Reader Rating0 Votes
Large screen makes this excellent value for money; True high definition display; Good broadcast TV picture
Can’t defeat overscan even on Blu-ray; Black levels could be better; Doesn’t support 1080p24; No side AV inputs
3.8