Sonos Amp for multi-room and multi-zone 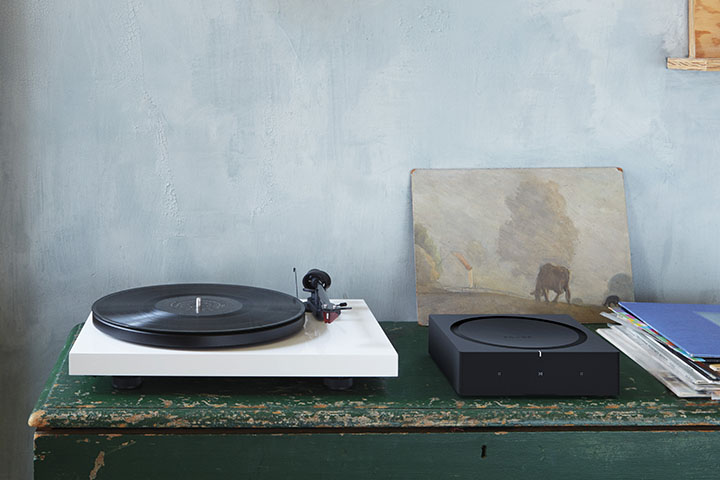 Sonos is famous for its multiroom, multizone, network speaker systems. It wasn’t the first such system (the original Yamaha MusicCast beat it), but it was the first successful system. And now it has added a component I think is vital for such a system: the Sonos Amp.

Apparently, the impetus for its development were the demands of system integrators and installers. And, indeed, the Sonos Amp is capable of being rack mounted. But as far as I’m concerned, its minimalist design is verging on beautiful. I think there will be a big market with regular consumers.

It is, literally, a black box. But a stylish one. It measures 215mm square, looking down from the top, and stands 63mm tall.

The Sonos Amp is a bit like a 2019 take on an old-fashioned hifi amplifier. It takes an input and drives a pair of connected speakers.

There are three kinds of input. One kind is a pair of RCA sockets which act as the stereo analogue input. Then, there are network connections in the form of two Ethernet ports and built-in Wi-Fi. The Wi-Fi is 2.4GHz only, 802.11b/g/n. You can use one of the Ethernet ports instead. The other Ethernet port allows it to double as a network switch.

At the back are four banana-plug sockets for speaker connection. Included in the box are adaptors to allow the use of bare wires. There’s also a wired output for an active subwoofer, should additional bass be required. The system also works with Sonos’ own wireless subwoofer.

Finally, there’s a HDMI socket. That’s the third input since it supports the Audio Return Channel feature of HDMI. The Sonos Amp sends a cool screen-saving abstract black and white picture down to the TV, and accepts audio back from the TV. So, you can use the Sonos Amp to play back the sound of broadcast TV and any other sources being fed to the TV. The HDMI output does not show any information about the music that’s playing.

Keeping with the minimalist theme, there are only three controls: marked touch sensitive points on the front panel allow volume up and down and play/pause.

But you use an app to exercise most control over the Sonos Amp. With that you choose music to play, select speakers (actually, “Rooms” because each is assigned to a room), and group and ungroup them speakers.

The only network audio listed on the app when you first load it TuneIn Radio. But you can add any number of additional ones from the list supported in setup. That list includes an astonishing 71 options, ranging from YouTube music to Tidal to Triple M to Stitcher to Deezer to Apple Music to Google Play Music to Audible.

And that, of course, includes Spotify. Unusually, uniquely I suspect, the Spotify control functions are incorporated into the Sonos app. Spotify is traditionally stand-offish about this kind of integration. Every other control app I’ve used simply includes a link to the Spotify app when Spotify is invoked. The Sonos way makes for a more integrated operational environment.

The services you choose are listed on the main “Browse” page in the app, along with the other inputs such as TV, Line Input and “On this Mobile Device” (so you can play its contents).

I used an Android tablet as my main control device, but I also installed the app on an iPhone to make sure all was well there. The “On this Mobile Device” entry was missing from that.

Likely the reason for that is that the Sonos Amp/Sonos App supports Apple AirPlay 2. If you want to play something that’s on your iPhone, you just use your favourite music app and select the relevant “Room” as your AirPlay speaker.

One thing I noticed as I chose my “Room” – which I’d called “Office” – as the speaker for AirPlay was how quickly and smoothly the music switched over. I switched back to music provided by my server, and it was just as fast and smooth. Sonos has been at this since 2005 and it has clearly nailed down effective network operation quite thoroughly.

But that age shows in other less positive ways. For example, when I set up the system there was no obvious way to play the bulk of my local music – about a terabyte of the stuff – which resides on my Synology Network Attached Storage. Looking through the settings of the app, I saw that there were options for “Show Media Servers” and “Show UPnP Servers” which were switched off. I switched them on but I could see no difference.

That was puzzling. Just about everything that doesn’t come out of Apple supports music served up via the industry standard DLNA protocols. But not Sonos, apparently. I last looked closely at a Synology product a couple of years ago. At the time I wrote (elsewhere) that “Only a couple of DLNA-style servers are supported [by Sonos], and Synology is not one of them”. I must have been able to find some resource about Sonos then that I can’t find now. Oh well.

But digging around the settings menu I found something called “Music Library Setup”. That allowed me to add a network share. I’ve done this stuff before – you add the network path to the folder you want to make available, along with username and password. But it’s not particularly user friendly.

Once done there was a fair wait while the app ran through the specified folder and indexed all the tracks. Remember, there was 0.98TB of music in there, more than 30,000 tracks. I didn’t hang around to time the indexing but went off and did something else for a few hours.

That done, the Sonos Amp was able to deliver much of my NAS music. Much of it, but not all of it. Specifically, it’d play the stuff sampled at 44.1kHz or 48kHz, but none of my high-resolution music. Of which I have rather a lot.

Again, this speaks to the age of the system. Back in 2005, just about nobody (except for DVD Audio enthusiasts) had 24 bit, 96kHz music.

The amplifiers in the Sonos Amp are, as I said, rated at 125 watts each into 8 ohms. And 200 watts each into 4 ohms. They are Class D amps, which means high efficiency. Even after running it as fairly high levels for several hours, the unit became only modestly warm.

I used my KEF R300 loudspeakers with this amp. They are more than revealing enough should there have been any performance deficiencies. There were none.

The amplifier happily drove the loudspeakers to whatever level I wanted, cleanly, clearly and with zero audible distortion. That they support low impedance loudspeakers means that purchasers have a wide range of loudspeaker options.

I mostly listened to the material from my server and to Spotify music. But to round things out, I plugged the output from my NAD phono pre-amplifier into the line inputs and span some vinyl. The usual problem of low levels for vinyl was immediate apparent. But there’s a setting in the app that gives you a choice of ten levels for the analogue input. I set that to 9/10 and that approximated the level of the digital sources.

Even with vinyl, bass was tight and extended. There was no particular emphasis on surface noise. Imaging was more than adequate. Few would not enjoy the sound.

The loudspeakers I used are very satisfying down to below 40 hertz so I didn’t feel tempted to use my subwoofer. But I did figure I ought to explore the subwoofer options a little. There are control options for the subwoofer in the app settings. You can adjust its level, the crossover and invert the phase. The online manual doesn’t say much about these, especially the last. Inverting the phase can help meld the sound from the subwoofer smoothly with the main speakers. Generally, you choose the setting which provides the higher perceived bass level around the crossover point.

The crossover point itself can be adjusted between 50 and 110 hertz. I had hopes that this would control not just the subwoofer (that is, implement a low pass filter for the subwoofer output) but also control the output to the main speakers. If it were to do that, it would filter out the specified bass so they didn’t have to attempt to handle it. However, it seemed to make no difference to the signal the main speakers received.

You can connect the Sonos AMP to a TV via HDMI. With my LG OLED TV, at least, it connected smoothly and easily via ARC and delivered the sound from the TV to a far high quality than the TV itself could manage.

There are options to adjust lip sync in the app, but there seems to be a significant delay in the audio by default. At least there was with the analogue input. I connected a microphone to the line inputs via a mixer since I was about to test the microphone, and there was a marked delay between my real voice and the sound of it appearing from the speakers.

If your TV does not support HDMI ARC, don’t worry. Sonos includes an adaptor of a kind entirely new to me. This has a plug to go into the optical digital audio output of your TV. At the other end is an inline HDMI socket. Somehow, this device converts optical digital audio into electrical digital audio carried by HDMI. I didn’t even know that the HDMI connection must carry a modest amount of current to power this activity.

My TV is fine with ARC, but it did get me to wondering. Could I use some other device? I pulled out my old Denon CD player – this one’s over twenty years old now, but still works perfectly well. It has an optical digital audio output. I plugged the adaptor in, powered it up and set a disc spinning. Yes, CD audio was now coming from the speakers.

Just another usage option for those who choose the Sonos Amp.

Well, as bit of a high-fidelity nerd from way back, I was a little disappointed about the lack of support for high resolution audio. That said, I am also fairly confident that higher sampling rates don’t actually deliver audible improvements. The main problem with the lack of high resolution support is that if, for some reason, you have accumulated a lot of high resolution music, and don’t have standard resolution versions of it, you won’t be able to use it in your Sonos system. Without, anyway, tediously converting it to lower resolution.

Were DLNA supported that might not have been a problem. Many DLNA servers – including that on my Synology NAS – can down-sample audio on the fly. But no DLNA means no access to that facility.

Still, enough of my obsessions. The Sonos Amp is a real winner if you have a virtual library full of CD-standard music in FLAC, AIFF, Apple Lossless, MP3, or if you just like streaming online sound. Sonos provides a mature and effective multiroom system. The Sonos Amp itself is well engineered and fit for use with first class loudspeakers.