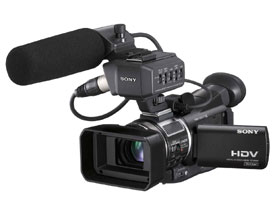 There’s a HD rush around the country and the cameras are getting smaller and better. Domestic HDV is very nearly affordable and the new mini-cams are also a boon for the professional, providing lightweight, seriously capable cameras for the jobs where the big boys can’t get to, but providing big boy pictures. Steve Turner hunted around for his lightweight tripod and took the Sony A1 on a seriously low-tech test run.

On the road again

‘Ahhh the perks of being a camera mag writer’, I thought as I drove myself second hand Honda class down to the botanic gardens in search of colourful wildlife. Still I did have this neat, new little Sony HDV camera to play with and I was getting paid to look at it so all was well.

On first look it’s a nice baby camera – my first impression is that it could be too light to be serious, but light enough to be very useful – so there’s a niche for it in the professional and amateur world.

I’m really a failure at this critic stuff because I rarely come across anything I don’t like and the same is true here. The A1 is a very nice little camera and that’s its main drawback. It’s small and very light. My first thought is that it’s a bit front heavy and could get a bit uncomfortable after a while – if you’re shooting hand held that is.

Worse than this though, is the dreaded tape ejecting from the bottom of the camera. I tend to get a bit narky about this; it’s a real pain and frankly, I’d sacrifice having the smaller size in favour of a side ejecting mechanism any day.

What’s on the menu

I’m a huge fan of switches. Nice big rotating things that get you straight to where you need to be. The idea of the touch screen seemed nuts to me. Why touch something you’ll normally go out of your way to keep clean? Well seems like I’m the one who’s wrong. I would never have expected to like this but I do – I think it’s great. Little icons scroll through and you select the one you want and easily change whatever it is and out you go.

Its brilliant compared to the normal routine of pushing a button to go up and down and across menus to get where you want. It’s nearer a computer like feel which we are all now familiar with. So, surprisingly, I liked it.

Out in the field

So off out into the real world to give it a test run. I had it on a small light tripod and simply shot a pile of static images. I have to allow for the fact that this is a sophisticated domestic camera really and I should not expect the ease of operation of a big camera. The small viewfinder takes a while to get used to and the swing out LCD screen is too small and too dull to be of any worth out in daylight (but that’s true of all cameras). You’d want to add a hood to the LCD if that’s the way you shoot.

The first thing I really notice is the placement of the zoom control. It’s the classic domestic setup and you use one finger to push/pull from side to side. Pro cameras have the control which rocks back and forth with two fingers – with way more control. The LCD screen has a fixed speed zoom as well as rec start/stop, but of course you have to have the screen open to use it. The top mounted zoom is too close to the viewfinder and hard to get at quickly.

Luckily the front ring is multi-functional and can be used as a manual zoom so reframing is easier using the manual ring.

The record button is in the usual place at the back of the camera (there isn’t a top one). Like the zoom control, this is awkward to get to and I quickly found myself wishing for a second switch on the top. Also on the way to the button, I kept bumping the mode control which is too sensitive and though a good idea, is too easily tripped to another mode – and therefore wastes time getting back to where you want to be – but then a colleague pointed out that you’d really want to use a remote on a camera this light on a light tripod.

Let’s move to the more positive stuff. Like the Z1, it has the expanded focus feature which basically zooms in to an enlarged (actually it switches rather than zooms) image so you can check focus. Very cleverly, it’s still set to the framing you started with (not the enlarged version). This is a seriously cool idea and is much better than crashing in (TV jargon for zooming in very fast) focusing and zooming back out.

So it’s HDV and has a zillion more pixels – but is it any good (it is after all still a single chip)?

I plugged it into a very nice 42″ LCD using the component cables and the pictures are stunning. Broadcast quality is now really available to any aspiring film-maker.

There’s an unusual look to the background when it’s out of focus and the consensus was that this is the chip – it’s OK though and not worth worrying too much about. There’s some noise, but by then I think we were getting a bit picky – you have to remember this is a dressed up Handycam and as such, is superb in terms of picture quality.

Sitting on top of the camera is the microphone adapter. Apart from making the rig look more professional it allows for the connection of professional XLR mics. Very important this – those little micro-plugs that domestic cameras have as standard don’t cut the mustard in the real world (they jiggle around too easily and are too fragile). Delve into the menu system to set the XLRs and you can have a small level display on the LCD screen as well. While not perfect, the setup serves well for a camera like this.

This is a good piece of kit either as a first camera for newbies or a spare for grizzled oldies. It’s brilliant for things like cars/boats and probably an exceptional travel camera. As a spare, you could also use it as a deck for digitising your stuff into your computer gadget (saves buying a dedicated VTR – tight aren’t I!). If you have the cash then head to upgrade land and get the FX1 or even the Z1. If you’re looking at the AC1, then you’re probably not in the market for Canon’s XL-1H ($15,000) or JVC’s HD ($10,000) anyway.