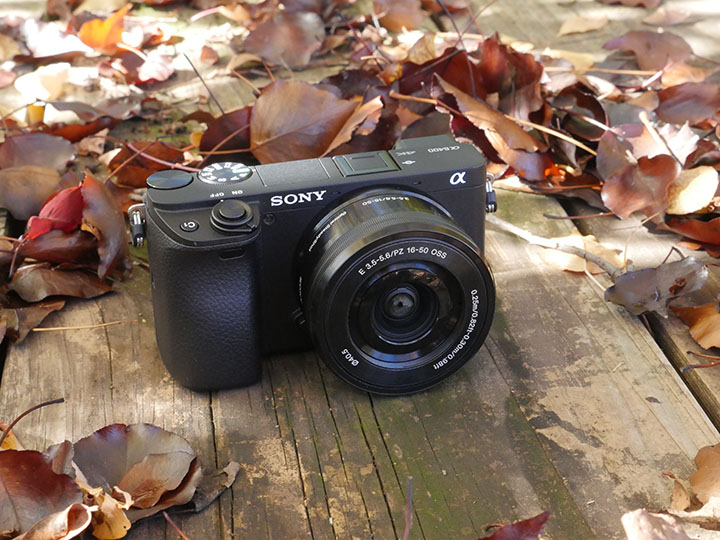 Lately I’ve been entranced by Sony’s various full frame cameras (see here and here). But now we have the brand’s latest, next-tier down camera, the Sony a6400 mirrorless interchangeable-lens camera. Even though it uses the smaller APS-C sensor, it shares the same E-mount for attaching lenses as the bigger cameras. Indeed, Sony sent down a couple of them for me to try out with it.

But we’ll return to those shortly. First, what is APS-C? It’s a sensor size bigger the Micro Four Thirds, but smaller than full frame. Full frame is around 36mm by 24mm. Sony’s version of APS-C is 23.5mm by 15.6mm. It uses Sony’s respected Exmor CMOS sensor with an “effective resolution” of 24.2 megapixels. The actual output resolution is an impressive 6,000 by 4,000 pixels.

If you buy a full-frame Sony camera, you have to be careful which E-Mount lens you buy. Even though they’re all plug-compatible, some are designed for the smaller APS-C sensor. Those ones won’t produce an image across the whole of a full frame sensor. But the other way around works fine: you can use an E-Mount full frame lens with this camera. And, indeed, I used two of them.

Another difference: because of the smaller sensor, you need to consider the multiplier factor. That’s the factor you use to work out the full-frame-equivalent focal length. With this sensor it’s about 1.53x. If you use a 50mm E-mount lens designed for a full frame camera, on the Sony a6400 camera it will be equivalent to a 76mm lens.

The body is quite a bit smaller than those of Sony’s full-frame models. Most noticeably, the lump above the lens – which is mostly a styling hangover from DSLR cameras – is missing. The viewfinder is on the top left corner at the back. That places it well for those who use their right eye to shoot, but lefties may find it a problem. Noses can get in the way.

The viewfinder has a resolution of 2.36 megapixels and there’s dioptre adjustment to allow good focus to be achieved by most people. It found it produced a bold, clear and sharp image, quite devoid of pixellation.

The rear monitor is flexible. It will fold out so that it can be viewed easily from both above and below. It can also be seen from the front for “selfies”. The display is touch-sensitive, so you can use it to choose a point upon which the camera should focus. It has 0.92 megapixels of resolution. A “Display” button (on the main selector dial at the back) cycles through several different information displays.

On the top is a hot shoe for Sony-compatible flashes and other accessories. But there’s also a pop-up flash which can be useful in an emergency, although artful results aren’t typically available with such things.

The shutter release button is in the usual place. Around it is a power switch. There’s one main mode dial. You spin that to choose Auto, Program, Aperture Priority, Shutter Priority, Manual, Video and so on.

One of them is Panorama mode. I found that one quite disappointing. The camera had to be held in landscape orientation and only covered about a 90-degree sweep. Rather than using its electronic shutter, it shot a burst using the curtain shutter. But then it downscaled the stitched-together pictures. They ended up 8,192 by 1,856 pixels. Do the arithmetic and you find that comes to a little over 15 megapixels.

For comparison, my old Samsung Galaxy S7 phone (and, I presume, subsequent Samsung models) kept the original resolution, simply trimming the edges. One of my favourite panorama shots with that phone covered a full 360 degrees and ended up at 23,712 by 3,664 pixels. That’s nearly 87 megapixels.

So, if you want to do real panorama shots with the Sony a6400, I’d suggest taking a number of careful side-by-side shots and using suitable software in your computer to stitch them together.

When you choose aperture or shutter priority mode, the setting can be adjusted with either the dedicated dial on the top right, or the dial around the enter button on the back. If going fully manual, the top dial does aperture and the back dial does shutter speed.

Most of the buttons can be customised to do the operations you find most convenient.

Burst modes of up to 11 frames per second are available.

Both battery and the single SD card slot are accessible through a door at the bottom. You can of course use Sony’s modern memory sticks instead. The battery life is rated at 360 photos using the viewfinder and 410 shots using the rear monitor. Movie recording is rated at 70/75 minutes. You charge the battery in place using a Micro-B USB socket on the left-hand side of the camera. I would love to see that connection retired in favour of USB Type-C.

Next to that is a Type-D micro-HDMI connector for output and a 3.5mm socket for microphone input.

The Sony a6400 supports both Wi-Fi (2.4GHz only) and Bluetooth. You can use Sony’s clever app on your phone for transferring photos or remotely controlling the camera.

The lens has a slide control on the side. Push it up or down to zoom in or out. If you prefer – and that’s something I prefer – you can instead use the control ring around the lens. That felt a little clunky in use, with the control motor seeming to lag by a tiny amount. When you’re in manual focus mode, that turns into a focus ring instead.

Pretty much regardless of lens, it’s worth choosing the “DMF” – Direct Manual Focus – mode. This is the same as auto focus mode, giving you the options for scene, area, pinpoint focus and so on. But while you’re holding the shutter release at half press you can then tweak the focus manually. That’s great for doing things like shooting a bird that’s a branch or two back in a tree. Cameras often want to focus on the closest branch.

Sony also sent down the Sony/Zeiss Vario Tessar FE 16-35mm FA ZA OSS lens. This one costs $1,799, or more than three times the cost of the bundled lens. I thought it would be fun to compare their performance. I didn’t do a comprehensive analysis, but it was clear that at the centre of the images, there was very little separating them in performance. The more expensive lens provided a slightly bolder contrast and slightly more subtle colours. At the edges of the image, though, the cheaper lens lost resolution while the Zeiss lens retained sharpness.

Taking photos with the Sony a6400

For the most part the camera was easy to use. But since it has so many of the manual control features of a high-end camera, you can get things wrong.

For example, at one point I took several photos under lowish light. Quality wasn’t imperative since they were just to illustrate an object. But when I popped the card into my computer, I was pretty started by the terrible quality. The pictures were all extremely grainy. I had the camera on “Aperture” mode – that’s my default – with the aperture on the particular lens at f/4, its maximum. Yet the shutter speed was up on 1/4000th of a second.

I soon found out that I’d somehow accidentally, unknowingly, managed to set the camera’s ISO to a fixed 65,535. No wonder it was grainy! I cancelled that and retook the photos. The ISO control button and dial was pretty much under the heel of my thumb, so I figure I must have pressed it while holding the camera. Be careful.

Of course, if I’d just left the camera on full auto mode, I’d have never had that problem in the first place.

That was a rare event, though. For the most part the camera did its stuff with no problems. Autofocus was fast. As is usually the case, Sony specifies an insanely fast speed. It says 1/50th of a second, but that’s not the sense I had. Nonetheless, I almost never found myself having to wait for focus to be found. When it wasn’t found satisfactorily, it was usually because I’d somehow gotten the area of focus into the wrong place.

The camera was light in my hand and the shutter release was well graduated, allowing me to hold half-press with reasonable ease.

The Sony a6400 costs $1,499 without a lens. In addition to the two lenses I’ve already mentioned, Sony sent down the truly amazing FE 70-200mm F2.8 GM OSS telephoto zoom lenses. That’s one of those largely white/cream lenses which you use to let people know that you’re a serious photographer.

That 70 to 200mm is, in 35mm-equivalent terms, 107 to 306mm. I took this one to the Tidbinbilla nature park near Canberra. It brought me remarkably close to quite a few kangaroos.

The combination of a wide aperture – f/2.8 across the entire range – and the long telephoto reach resulted in a beautifully shallow depth of field that made the subjects simply pop. The bokeh around them was smooth-as, thanks to the 11-blade iris. All shots were hand-held. Even though the day was somewhat overcast, the wide aperture allowed fast-enough shutter speeds of 1/320 to 1/1000 of a second at an ISO of 100. That produced superb clarity and detail.

DMF proves very useful at focusing on the thing that you want:

Stained glass in churches – this one’s in the historic St John’s church in Reid, Canberra – can be hard to capture, given that they are backlit and their surrounds are dark. A bit of exposure compensation and we get this:

Cropping down, the detail is preserved:

Control. Control! The camera makes it easy to get the subject in focus, and choose a high-enough shutter speed to get the sought result:

A view across Lake Burley Griffin in Canberra with a 16mm focal length:

Near the centre of the frame it’s hard to tell the difference between the same shot using the $1,799 lens (left) and $499 lens (right):

But at the extreme right of the frame, the differences become clear:

And now, that glorious long lens. With the naked eye the kangaroo tended to fade into the trees behind it, but not with this lens:

That doesn’t really demonstrate the clarity and detail, so let’s crop the shot down:

The official website for the Sony a6400 camera is here.