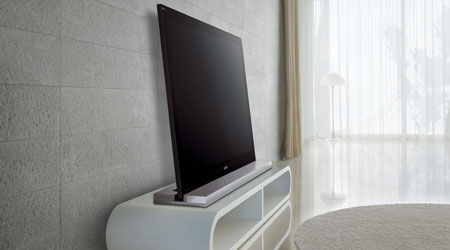 With Sony’s new TV launch a couple of months ago it focused primarily on two things. The first was the forthcoming 3D models, and, no, the model under review here is not one of them. The other was the company’s decision to add a bit of a tilt to its TVs. It strongly believes that TV viewing is more enjoyable if the TV is a little below eye level, and tilted slightly up to present an undistorted face to the viewer.

The NX800 series is Sony’s top end (aside from the forthcoming 3D models) range. The KDL-52NX800 is, of course, a full high definition model with a nicely large (132cm) screen. But it also has a very thin body. Even though I’ve put 64mm in the specifications box, as specified by Sony, it looks a great deal thinner than that. That width is for the bottom part of the display, where some of the electronics protrude and provision is made for attaching the stand. Looked at casually, the display looks no thicker than the rest of the panel, which is only 25mm deep.
Its regular desktop stand came in the box, I was also supplied the SU-52NX1 aluminium stand (a $349 option). This is a full width unit with a slot to hold the base of the TV. It defaults to allow the TV to rest canted back by six degrees, but can be adjusted to make it upright. It is completely passive, but curved sound guides capture the audio from the TV’s downwards firing speakers and redirect it forwards through a grille. The regular stand also defaults to the lean-back posture.
The TV’s face is covered in an unbroken sheet of glass from top to bottom, side to side, making it look quite attractive.
As for features, think ‘everything’. There is networking via a cabled Ethernet connection or Wi-Fi, and USB to play back multimedia. And also direct connection to a number of video portals over the Internet, something else that Sony sees as growing rapidly. The convenience of the networking capability is assisted immensely by the built-in WiFi support, although setup for this is a little more complicated than via Ethernet (you have to enter a password).

All those cool features seemed to work nicely. My only complaint would be that if you pick one of the IPTV video portals and choose one of the thumbnails to start a video playing, when it gets to the end the TV goes immediately to the next one. And so on. If you happen to wander off without paying proper attention, it is possible you could inadvertently wipe out your month’s bandwidth allowance.
Still, the quality was generally quite good. For Internet video, very good. You can zoom the picture up to four times its native resolution, so you get a choice of small, sharp pictures, or larger softer ones.
As for core functionality, this TV was truly lovely. Easily the best done by Sony yet, the clarity of the TV seemed to offer a window straight through to the source.
It was revealing, and while the best DVDs looked magnificent, the many with excessive sharpening or edge enhancement suffered from the TV’s transparency. The MPEG noise reduction circuit in the TV could only do so much.
SDTV actually looked as good as the better DVDs for the most part, but it was with HDTV and Blu-ray that this TV truly shone.
The black levels were very good in this LED-lid panel, despite the use of edge-LED technology (which is designed to keep the panel thin) rather than a grid of LEDs behind the display. That provided a solid basis for deep, rich colours.
I would have liked an extra setting on the Motionflow 200Hz processor. By default it was on ‘Standard’, and this tended to allow a little judder to creep through, rather than providing totally smooth picture movement. The ‘High’ setting overdid things, producing some heat haze around moving objects and, worse, making some fine objects twist and warp weirdly. Somewhere in between the two might have struck just the right balance.

But those are minor complaints. This is an excellent TV, with a very large screen, at a great price. Whether you want it tilted back or not, you will enjoy what it can produce.
Overall
Features
Value for money
Performance
Ease of Use
Reader Rating0 Votes
Slim panel; Full high definition display; Excellent picture; Excellent multimedia support via USB, network and WiFi; Supports Internet TV
No S-Video; An intermediate option on the Motionflow 200Hz circuit would be useful
4