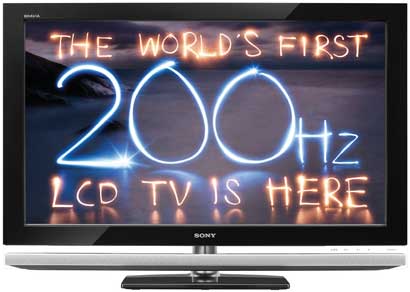 As I write, Sony has five different ranges of full high definition LCD TVs available, with their respective forty inch (101 cm) models ranging from $2,199 and to $3,399. For that higher figure you receive the Bravia KDL40Z4500, the model under review here.

This TV is from the new Z4500 series, and features a technological first: a 200 hertz picture. Similar models are marketed in the US as 240 hertz TVs.

The 200/240 figure is the number of picture frames that the TV can display each second. As we point out from time to time, unlike the old CRT TVs, there is in general no need to have faster frame rates for LCD TVs. They don’t flicker, so what’s the point?

The point is what those extra frames consist of. Sony’s older ‘Motionflow 100Hz’. takes the usual 50 frames per second from DVDs, TV or whatever, and between each pair of them creates a new frame which is half way between the two original ones. This eliminates ‘judder’, which is a jerking of the picture as it moves across the picture frame.

This model, with its brand new ‘Motionflow 200Hz’ processing creates not one, but three new frames between each original pair.

The TV also features a dynamic backlight which stretches its contrast ratio to a claimed 80,000:1, and a Digital Living Network Alliance-compatible Ethernet port, plus a USB socket along with Sony’s proprietary Digital Media port.

There is one leading edge technological innovation not included in this TV: LED backlighting. Sony ought to have a model including this out soon, at a marked increase in price. So while this TV won’t provided the ultimate LCD black level performance, you get what must be the best black level performance I’ve seen from a relatively conventional LCD TV.

In dark Blu-ray and DVD scenes, the backlight turned down and full detail was revealed within the shadows. The only significant weakness appeared when a bright item flashed up on an otherwise dark screen, causing the dark bits of the picture to brighten. In a normally lit room this was basically unnoticeable, but in my dark room it was a mild performance weakness.

The Ethernet and USB music and photo access worked well.

But let us cut to the chase: what, if anything, does Motionflow 200Hz offer compared to other, lower powered, motion smoothing features. Nothing directly, it seemed to me, but quite a bit indirectly. The TV provided four settings for this feature: Off, Low, Standard and High.

‘High’ delivered the smoothest motion, but it also produced a glossy video-like result and some heat haze artefacts. The default ‘Standard’ setting was simply brilliant. It smoothed motion, allowing finer detail to be discerned during movement, but avoided the distractions of ‘High’.

I don’t know whether the TV was working at 200 or 100 hertz mode in ‘Standard’, but it didn’t matter. What seemed to matter was that the processing power that Sony has built into this TV to allow it to perform its 200Hz frame creation has allowed it to deliver almost all the smoothness, and almost all the motion detail, without any of the processed artificiality of earlier systems. And it worked flawlessly even with 1080p24 material from Blu-ray.

Short of the new LED backlight models that seem destined to dominate high-end LCD TV performance over the next few years, the Sony Bravia KDL40Z4500 LCD TV offers about the best performance presently available. The 200Hz capability is important primarily in the way that it allows the picture-smoothing processing to proceed entirely in a picture-improving, rather than artefact-introducing, mode.