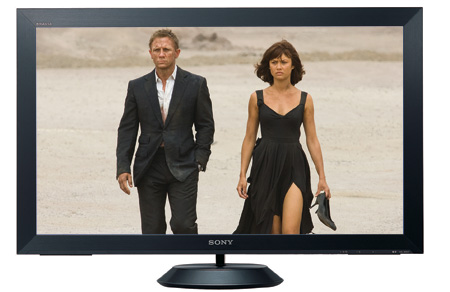 If you look Sony’s Bravia KDL40ZX1 TV fair in the face, you won’t know what the fuss is all about. But if you wander around the room a bit, and take it in at a different angle, you will probably be amazed.

I was. And it all had to do with this TV’s edges.

The edges of this 101.6 cm full high definition TV are less than one centimetre thick. It isn’t just the edges … that thickness continues for several centimetres in from the edges, and twenty odd centimetres down from the top. This is a thin panel. The thicker part brings the total depth up to just 28mm, or less than a third of the thickness of regular LCD and plasma TVs. The 40ZX1 truly is a panel TV.

It uses LCD technology, of course, and an ‘EDGE LED’ module to provide the backlight without adding significantly to the depth of the panel.

The speakers are actually in the base (if you wall mount it, you need to purchase a different speaker module), while most of the connections and the analogue and digital TV tuners are in a separate ‘Media Receiver’. This communicates with the panel wirelessly. Sony says that the range is good for up to 20 metres. The panel itself has just one input: a single HDMI socket on the rear.

Sony has kitted out the TV with its usual range of premium goodies, including a USB socket (on the Media Receiver) for photo display and a ‘picture frame mode’ so that the TV can decorate your room with your precious memories. Plus there is Motionflow 100Hz for smoothing on screen motion.

This TV looks startlingly good, even when switched off, thanks to its amazingly thin profile. When switched on it looked pretty good too. Sony’s picture processing is excellent, and the dynamic contrast control, along with an automatic brightness feature that adjusted the picture settings for the level of room light, helped the TV produce a generally excellent picture.

In a very dark room and with very dark scenes, there was some backlight glowing, so the TV was in that regard just a little weaker than some of the premium competition. But the screen remained remarkably even in tone, despite the concentration of backlighting at the edges.

The Media Receiver and the panel hooked up wirelessly to each other with no difficulty and in my room, where they were a couple of metres apart, there was never any interference or loss of contact.

Where things weren’t quite so good was with the signal handling of the Media Receiver. Apparently this uses 1080i is its fixed resolution for communicating with the panel. The latter supports 1080p24 (ie. the preferred Blu-ray format) when fed by a HDMI cable directly to its input.

If you are using the Media Receiver for your connections, you don’t get 1080p24, so there is some jerkiness to on screen movement from Blu-ray. You also lose the benefit of the high end 1080p conversion of some Blu-ray players, since the Media Receiver turns it back to 1080i.

The panel’s 1080i to 1080p conversion was a fairly high quality, but not perfect, and occasionally produced some jaggies and unstable elements to the picture.

Nonetheless, there is an argument to be made that the fact that wireless communication works at all makes such quibbles an exercise in pedantry. I spent much of the time using a direct HDMI feed to the panel, and avoided all that. For the panel itself is excellent, and for the moment at least, its dimensions are unique.