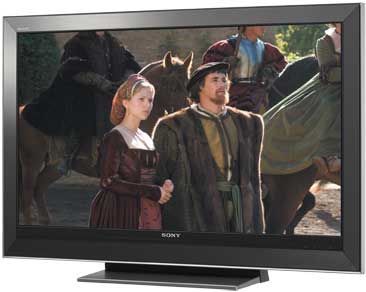 For the best part of 30 years, Sony TVs have enjoyed a role almost as a kind of AV status symbol. If you had a Trinitron, you were serious indeed. Eschewing a massive range for a few key models, Sony has always emphasised performance over value for money.

While the glass-framed XBR-Series still leads that charge, the W-Series Bravia (or BRAVIA, as Sony prefers) drops a few of the very fanciest extras to bring its price in line with the competition.

The 46 inch (116 cm) W-Series unit is largely defined by what it doesn’t have, compared to its XBR equivalent. By saving $1,100 you lose Motionflow 100Hz technology (which interpolates extra frames to smooth out fast action sequences), and you only get the Bravia Engine EX instead of the Bravia Engine Pro. Exactly what either of these last two arcane technologies does is not disclosed to those living outside of the Sony assembly-line clean room.

Seriously though, you do get a 46 inch CCFL-backlit display at 1920 x 1080, supporting x.v.Colour on a 10-bit panel. This gives you 1.8 times as many colours as a now old-fashioned RGB panel. And as should be considered standard on any full HD TV at this price point, there’s support for 24p cinema mode, so the panel can playback Blu-ray without any jerkiness or irregularity of motion.

For other sources besides BD, motion smoothing is instead provided by the TV’s software-based Cinema Mode, which is effective at keeping DVD and TV playback silky.

There’s the full gamut of inputs, including the all-important triple HDMI inputs and plenty of extra component and composite plugs for connecting up analog devices such as VCRs and older cable TV receivers.

This may be Sony’s ‘budget’ TV, but thanks to the continuing commoditisation of the core technologies – especially the LCD panel – you will enjoy excellent visual quality for this price. Colours are vibrant, brightness is even and there’s a panoply of options, including a light sensor which turns down the backlight in a dark room. This reduces the amount of light going to the LCD panel and gives the appearance of deeper blacks.

The 10-bit panel is higher spec than some TVs which still run 8-bit panels, offering a wider range of colours, though you do need to be hyper-sensitive to get much benefit out of this.

The remote is full-featured and fairly friendly, though for the last couple of generations, Bravia remotes haven’t had proper backlighting. You can see the button light up, but not the label.

Oddly the TV’s own controls are located on the top of the unit which is incredibly awkward for a model that’s supposed to more mass-market: plenty of people will still want to jam this enormous thing into some kind of hutch or enclosure. The older side controls were better.

What the W-Series does lack is the sense of style that older Bravias exhibit. This is just another TV, it can’t become a style icon in your home like the glass-framed XBR.

A quibble too is the lack of a DVI-input for a PC. There’s an analog SVGA plug, but a DVI would be more useful for today’s home theatre PCs. Still, you can either upgrade your PC with an HDMI-equipped videocard or use a converter cable.

If this is what you get when you try to save some money on your next TV purchase, then bring on the budget cuts. It’s $1,100 cheaper than its flagship equivalent but boasts most of the same functionality. Okay, you can tell this is the budget option. The fascia is plain, the buttons are clicky. But in the business of making images, the W-Series is no apprentice.

Yes, the panels look different side-by-side, and there are cheaper units without a Sony badge, but you no longer need to mortgage your second child to maintain brand loyalty. Overall, you may be skimping on a few high-end extras, but you’re getting a whole lot of TV for a realistic price.