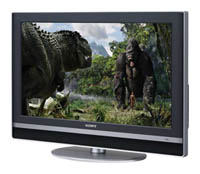 In the few short years since big screen TVs have become popular, manufacturers have scrambled for a slice of the growing home cinema pie. Plasma was first, but LCD displays have surged forth in recent years, gobbling up market share and proving themselves as the undisputed kings of flat panel sales worldwide.

Now that it’s completely out of the plasma TV business, Sony’s latest assault on the home entertainment market is with a new line of LCD-based Bravia TVs. With sizes up to 40 inches, Bravia looks set to take on its plasma-based competition.

Most flat-screen televisions are designed with aesthetics in mind, and the team at Sony has taken this to the next level. The Bravia is black, sleek and quite simply stunning to behold. As such, you’ll want to make it a centre-piece for your living room, and its black, grey and silver colour scheme is neutral enough to match most dÃ©cors.

In terms of ergonomics, the display swivels on its base easily; it’s not as heavy as a plasma unit of a similar size. Also, the remote control and on-screen menu system are logical and fairly easy to pick up for the first time.

This unit’s image quality is incredible. In fact, the screen’s resolution is so good that it highlights the limitations of current DVD movie technology. And the days of LCD screens leaving ghostlike ‘trails’ behind fast moving objects as they zip across the screen are well and truly over. The pixel refresh time – or the time it takes for a pixel to respond to an electrical signal – is around eight milliseconds. Generally, higher pixel refresh times – above 12ms – can lead to the ghosting effect.

The Bravia’s 1,300:1 contrast makes it possible to see an impressive amount of detail in dark scenes. While the panel’s blacks aren’t quite ‘true’ black, it does a very admirable job of getting close. With the lights on, black is nearly indistinguishable from true black.

Viewing the unit from an angle is surprising – it can handle angles of up to 178 degrees. This means viewers who are not dead centre don’t have to suffer any distortion in the picture, which was one of the problems that marred LCD technology in the past. It appears that Sony has completely eliminated this problem – for both horizontal and vertical viewing angles.

Perhaps the only drawback with this LCD panel is the colour rendering. Colours are muted and reproduced very accurately, but the saturation and exaggerated depth we’ve become accustomed to over the years by watching tube and plasma televisions is gone. It’s a more accurate picture, but a different viewing experience that may not be for everyone. You can make adjustments to brighten up the colour, however.

As the Bravia’s LCD panel supports 1080i high-definition (HD) digital TV standard, the screen also demands inputs that can support this mode. As expected, the Bravia is equipped with a HDMI (High-Definition Multi-media Interface) input, which carries both audio and HD video signals in a single cable. This ensures easy connectivity for the next generation of home entertainment devices including HD personal video recorders (PVRs) and Blu-ray movie players. Other video inputs include VGA, DVD-DI, composite, S-Video and component. It’s good to see that some of the video inputs are located at the edge of the panel for easy access, with the remainder at the back of the unit.

Unfortunately, Sony has decided to equip the Bravia with a regular analog tuner, so your first point of call will be to add an HD digital set-top box to make the most of the Bravias panel resolution and widescreen aspect.

The sound quality on the unit is superb considering the size of the speakers mounted below the screen, but anyone investing close to $6,000 on a display would do well invest in a decent surround-sound system. It just doesn’t have the earth-shaking bass for movies. Without the added immersive effect of surround sound, it’s difficult to get lost in the action on screen when watching your favourites.

When it comes down to it, there are a lot of choices at the Bravia’s price point. You could even choose a large plasma TV instead. However, the Bravia’s image quality is as good as you can get on an LCD, plus the 40 inch size is well suited to many environments where 50 inches is just too big, while 32 inches is too small. The TV looks fantastic, has a great design, and is the king of LCD TVs to date.